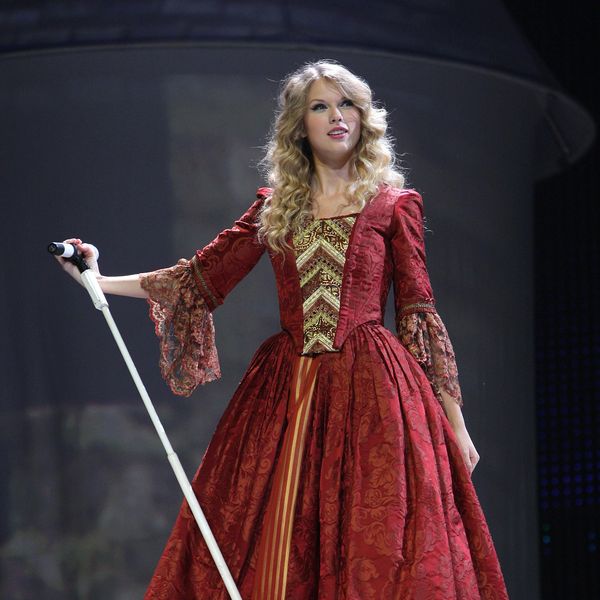 Just over a week after telling Good Morning America hosts that "Love Story" was "the most fun" to re-record from her vintage discography (so far), Taylor Swift revealed a snippet of the track through a Match.com advertisement.

The ad is written by known-Swift bestie Ryan Reynolds, and follows a once-lonely Satan as he navigates the dating world with the help of the service. His first (and only) encounter is with 2020, and the match made in literal hell embarks on a series of first date activities, such as walking in a park and eating a picnic in a barren football stadium.

Okay so while my new re-records are NOT done, my friend @VancityReynolds asked me if he could use a snippet of one for a LOLsome commercial he wrote so...here’s a sneak peak of Love Story! Working hard to get the music to you soon!! https://t.co/0vBFXxaRXR

As Satan and 2020 fall in love while running on treadmills — the equipment between them naturally closed for the pandemic — Swift's "Love Story" chronicles the romance over dramatic grins and laughter.

It's certainly an interesting debut for the first of Swift's re-recordings, but it is a much more promising conclusion to the year than the literal dumpster fire Satan and 2020 take a selfie with during the closing moments of the ad spot.

NOT THE FALLEN SCOOTER 😭 THIS IS WHY I LOVE TAYLOR SWIFT #2020LoveStory pic.twitter.com/2XeMrjRppp

the year is 2008. taylor swift has just shared a snippet of her new song "love story" from her upcoming fearless album. you share your excitement on myspace. life is good.

Check out the full commercial featuring "Love Story" below: