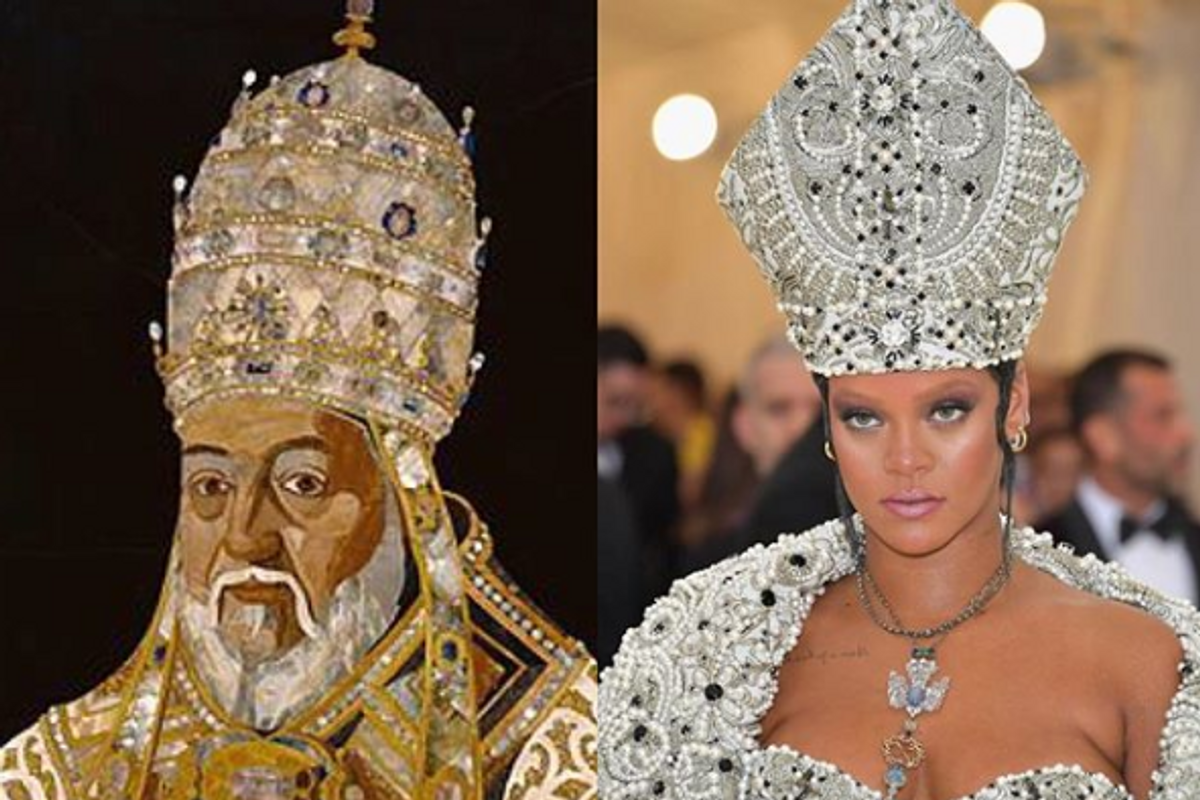 Meet the masterminds behind @tabloidarthistory.

With the advent of the Internet's fast-moving information exchange, it is easier than ever to forget moments in pop culture, and even important world events, that, while instantly memorable, lose their luster in a vulturous 24-hour news cycle.

Making sure you never forget some of pop culture's most iconic celebrity moments are UK-based friends Chloe Esslemont, Elise Bell, and Maryanne Soret. As recent university graduates in their early twenties, the trio created the @tabloidarthistory Instagram account, and online platform. It is dedicated to memorializing Western culture's most sensational star-powered moments with savvily on-the-nose comparisons to art through the ages.

Did you know that a Blackout-era, bewigged Britney Spears at a Del Taco drive-thru uncannily mirrors the romantic heroism of Caravaggio painting from 1607, "David with the Head of Goliath"? And could it be that Kate Moss as a Saint Laurent-clad rocker angel at this year's Met Gala bears striking resemblance to Daisy Fellowes in Schiaparelli circa 1933? We didn't know either. The new sheds light on the old masters and vice versa.

In the most idiosyncratic and often humorous fashion, Tabloid Art History explores, through the ephemera of memes (including how often Beyonce channels powers greater than herself), the ways in which all art is cyclical.

PAPER chatted with Esslemont in the UK and got the scoop on Tabloid Art History's rich source material, the real OG Kardashians, and how history (even in a pop culture context) repeats itself through an artistic lens.

I know you're in the UK, but is there anything you're excited about with the VMAs this year?

Yeah, I love that Nicki Minaj seems to be seated in front of Kylie Jenner and Travis Scott. Nicki lives for the drama, and one can hope the Kardashian camera crew is on board.

You bet! Somewhere in the world, Kris [Jenner] is getting her 10%.

OK, so tell me about the concept of the @tabloidarthistory Instagram. How did that come about?

Me and Elise are always talking about how two of our main obsessions are art and pop culture. We saw a few memes that touch on that; one of the most prominent ones compares Lindsay Lohan to the statue of St. Therese. The photo of Lindsay passed out in the car. I said to Elise that it would be a great dissertation topic, it's so fun to see when art and pop culture collide. There is another one of Kim [Kardashian] and North [West] in the front row at fashion shows being compared to Madonna and Child. It came out of wanting more content like that, and realizing there was a void to fill.

TabloidArtHistory on Instagram: “Detail of the statue Galatea coming to life, ‘Pygmalion and Galatea’ by Matthäus Terwesten, c. 17/18th century // Image of a mould being…”

It's really smart, and grounds these pop culture moments that we think are isolated incidents.

Yeah, that's something I really like about not just the account but the concept of pop culture and history, you think they are unrelated. And some things do change over time, in terms of what we value in culture and society, but pop culture really at its core is about human nature. Art is of course very similar, so exploring those connections is really what makes it so fun for us.

"Pop culture really at its core is about human nature."

When you were studying art, did it occur to you at certain points that historical figures or pieces you were examining might have ties to present day moments?

I've always really loved art, but I'm not great at math or science, so that's where the humanities play a big role in what we do now. I think my interest in art, history, and English literature also stems from being really nosy, wanting to know what people were up to, and loving interesting stories.

It's funny then that the account is called Tabloid Art History, because it puts the nosiness to good use.

And it's important to remember that art and art history back then and what we think of it now is that it was the pop culture of their day. Almost like what tabloids are today in some ways.

Yes, how scandals in the art world were the hot gossip of yesteryear?

Oh yeah! I'm writing a piece for our website about the Mazarinettes, who were seven nieces of Cardinal Jules Mazarin in the 16th Century. They had lots of affairs and became mistresses of kings and poisoned people and got into a lot of scandal. My main hook for that is — I feel like a lot of people throw around that phrase, "These are the original Kardashians," but these sisters are. All the stories about them are a lot crazier than anything you'd read about Kim, Kendall, and Kylie.

People say history repeats itself, so one could argue that pop culture of today bears resemblance to events and art of the past.

It's funny: people are always people. The juxtaposition between how things are different but actually just the same, is what makes putting the account together so fun.

​Do you have any favorite posts?

We have two types of posts: one is more humor-based, so a favorite is when we put a photo of Britney Spears holding a taco bag next to Caravaggio's "David with the head of Goliath." That'll be my legacy. Then we have one that's more an appreciation of a pop culture event like a music video or a film within an artistic moment. We took a Horace Pippin work and juxtaposed it to a still from Beyoncé's "Formation" video. I love just being able to take two gorgeous pieces of art by looking at a different way mainly in looking at them together.

Surely that approach brings in people who aren't that into art history.

It works the other way, too! People tell us that they start watching certain reality shows or listening to Beyoncé after seeing the parallels we'll make with varying artforms.

What else do you have on the horizon?

We've got another edition of our zine coming up, but it's an opportunity to expand on what we're doing online. The zine will feature interviews, essays, poetry, art, and illustrations. You can be limited on Twitter and Instagram to a certain number of words and characters, so here is a longform way to talk about the intersection of art and pop culture. We're looking into creating merch, too.