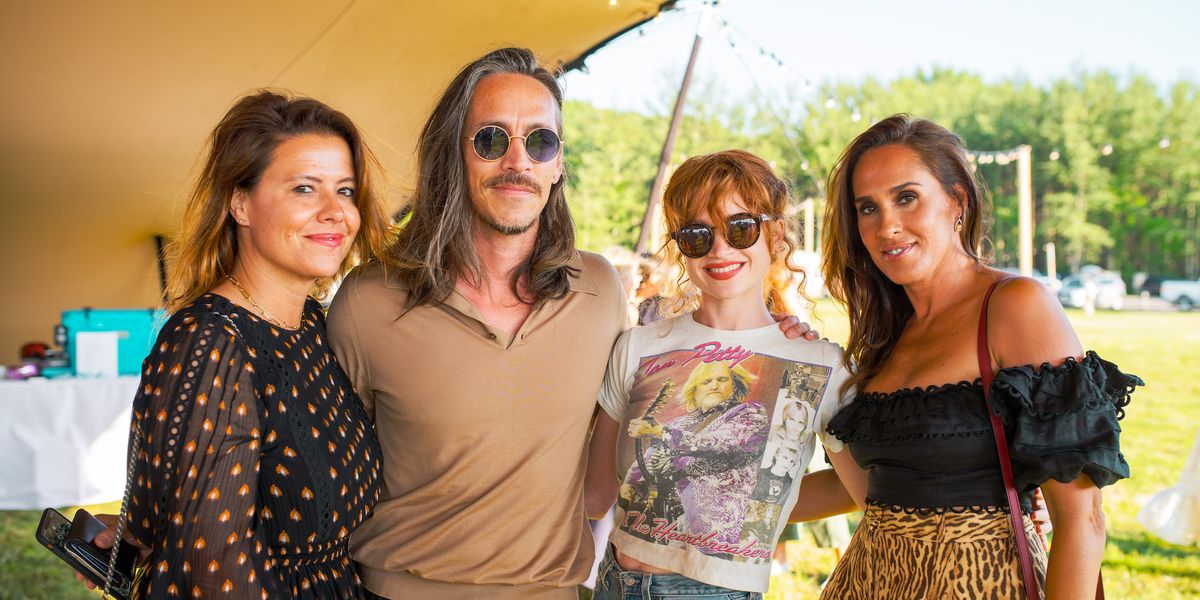 During the golden hour this past Saturday, guests like Cynthia Rowley, Carolyn Murphy, Don Draper and Roger Sterling (er, Jon Hamm and John Slattery) gathered on a Montauk field to hear music by Wild Belle and attend a dinner in honor of Surfrider's One Ocean Benefit celebrating "Women Making Waves."

The grassroots non-profit organization, founded in 1984, aims to protect our global waterways through action and advocacy across the United States and around the world. A major issue the organization is focused on combating, and raising awareness of, is plastic pollution in our planet's bodies of water. "One of the most worrying stats is that some scientists estimated that there will be more plastic than fish in the ocean by 2050," Chad Nelsen, CEO of Surfrider, told me. (And that's far from the only outrageous, gasp-inducing statistic; others include the fact that there is "more microplastic in the ocean [currently] than there are stars in the Milky Way" and that "at least 8 million tons of plastic enter the oceans each year, [which] is similar to emptying a garbage truck of plastic into an ocean every minute," according to Global Citizen.)

Because, despite many of our best efforts to recycle plastic, the sad reality is that, as Nelsen explains, "we're only recycling 9% of [the world's] plastics." He continues, "[The U.S.] actually used to ship all of our recycling to China [but] they're not taking it anymore because they have their own plastic consumption problem now." And so, organizations like Surfrider are trying to encourage us to rethink our consumption habits and our relationship with this material. As Nelsen says, we used to hear "reduce, reuse, recycle" but now he thinks we need to approach plastic from the standpoint of "refuse, reduce, reuse, recycle."

The biggest culprits, he points out, are single-use plastics like iced coffee cups, straws, utensils, bags, takeout containers and water bottles. "It's a design flaw," Nelsen says of our reliance on these disposable containers. "Why would we make something like a plastic take-out bag at a supermarket that you're going to use for like 10 minutes when it's going to last 10,000 years?" Along with encouraging individuals to reduce their plastic use (like participating in Plastic Free July) and replacing plastic with reusable and sustainable water bottles, coffee mugs, utensils and shopping bags, Surfrider is also working with companies in the hospitality industry to enact better practices since so much of our dependence on single-use plastic often begins in restaurants, coffee shops, hotels, airports etc.

On Sunday, guests at Surfrider's benefit got to learn first-hand about the impact these practices can have. The night's honoree was Jayma Cardoso, the owner of the Surf Lodge and one of Montauk's most indefatigable hostesses. A longtime supporter of the organization, Cardoso has recently undertaken a major overhaul at the perennially buzzy hotel and nightlife venue with respect to their environmental practices. "We eliminated plastic drinking straws, cups and bottles," Cardoso says, "as well as incorporated custom drink-ware made from IngeoTM biopolymer, a PLA resin derived from plants that is 100% compostable. We'll also be carrying PathWater, which is a reusable and recyclable aluminum bottle with high-quality water inside."

During her acceptance speech, Cardoso mentioned the area's Fort Pond and its importance to the town and to the hotel. "Without Fort Pond, there'd be no Surf Lodge," Cardoso shared, a reference to the fact that Surf Lodge does not sit directly on the beach but instead provides guests picturesque views courtesy of the freshwater pond and surrounding environs. After she and members of Surfrider realized how polluted the waterway was, and the potential role hotels and properties like Surf Lodge had in inadvertently contributing to this problem, Cardoso decided to undertake a $1.4 million initiative to overhaul Surf Lodge's entire septic system, making it more "high-tech with new nitrogen-reducing units that treat sewage onsite," as she explains.

"Jayma is an example of someone identifying a problem and then taking action and solving it," Nelsen says. "If we can scale that, that's how we turn the tide on these issues." He acknowledges, though, that the road is long in order to get more businesses, governments and individuals to follow people like Cardoso's lead. "The bad news is that plastic production is actually -- despite all the awareness -- still on the rise," he says. But, he later adds, "The positive news -- and I'm an optimist -- is that I think we can solve these things...we just got to pick up the pace."

All photos by Madison McGaw/BFA.com