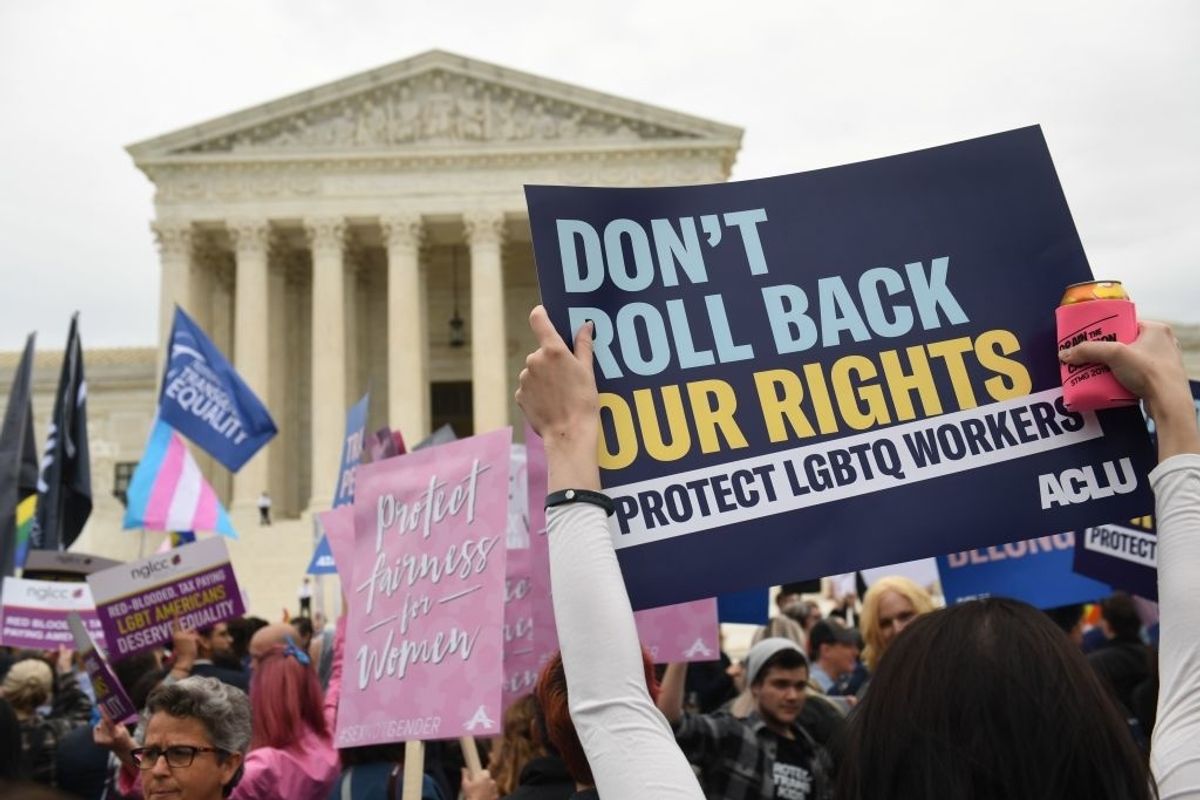 In 2013, Aimee Stephens was fired from her job as a funeral home director after she opened up to colleagues about her trans identity and gender confirmation surgery. "The first step I must take is to live and work full-time as a woman," Stephens wrote then, in a letter addressed to her coworkers. "I will return to work as my true self, " she added, "in appropriate business attire." Stephens sued after being fired.

Shamefully, the Trump Administration will argue at the Supreme Court today that employers should be allowed to fire… https://t.co/8Rt1g9TWVO
— Chelsea Clinton (@Chelsea Clinton)1570545974.0

The Court is also taking on a similar case arguing whether the law should also uphold and protect sexual orientation claims. CNN reports that should these cases be decided in favor of Stephens and others, it could revolutionize anti-discrimination laws for LGBTQ workers. According to UCLA's Williams Institute, the LGBTQ workforce is currently comprised of one million workers identifying as trans, and 7.1 million lesbian, gay, and bisexual workers.

There are some obstacles, though. Obviously, this wouldn't be the first time the Supreme Court made a judgment that affected millions of queer lives (i.e. granting same-sex marriage back in 2015). But this vote was decided then by Justice Anthony Kennedy, considered a champion of LGBTQ rights, when he was still on the bench. Justice Kennedy has since been replaced by President Trump-appointed Justice Brett Kavanaugh, whose views are markedly more conservative. Ultimately, how the workplace discrimination cases turn out have as much to do with Democratic and Republican party lines as it it does with where the country winds up in 2020, when the next presidential election will be decided.

Currently, only 22 states, including Washington, DC, have statutes protecting workers based on sexual orientation, CNN reports, while just 21 states including DC have anti-discrimination protections based on gender identity.

A lot is at stake for the civil rights of the LGBTQ community in the workplace. Federal employment protections for the community have long been a goal of activists and advocacy groups, and a win in the area of work could potentially catalyze change in other needed civil rights sectors, from housing to healthcare.

Currently, the Equal Employment Opportunity Commission, an independent agency that enforces federal law making it illegal to discriminate based on sex, took the position during the Obama administration that federal law actually does include protections for gender identity and sexual orientation. This is still the position of that agency, which can be seen on its website.

Just this summer, 200+ businesses, from Apple to Amazon, filed a brief with the Supreme Court asserting that, considering their collective 7 million employees and $5 trillion revenue, no one "should be passed over for a job, paid less, fired, or subjected to harassment or any other form of discrimination based on their sexual orientation or gender identity." The brief also argued that "several federal courts have previously held that discrimination against LGBTQ people violates laws, including Title VII of the Civil Rights Act of 1964 and Title IX of the Education Amendments of 1972."

GLAAD reports that according to recent surveys, "more than 40 percent of lesbian, gay, and bisexual people and almost 90 percent of transgender people have experienced employment discrimination, harassment or mistreatment." Obviously, change is overdue. The time is now.

Aimee Stephens comes out of the Supreme Court to chants of “we love you!” #RiseUpOct8 https://t.co/PxOgwq7tLH
— Alexis Goldstein (@Alexis Goldstein)1570552293.0