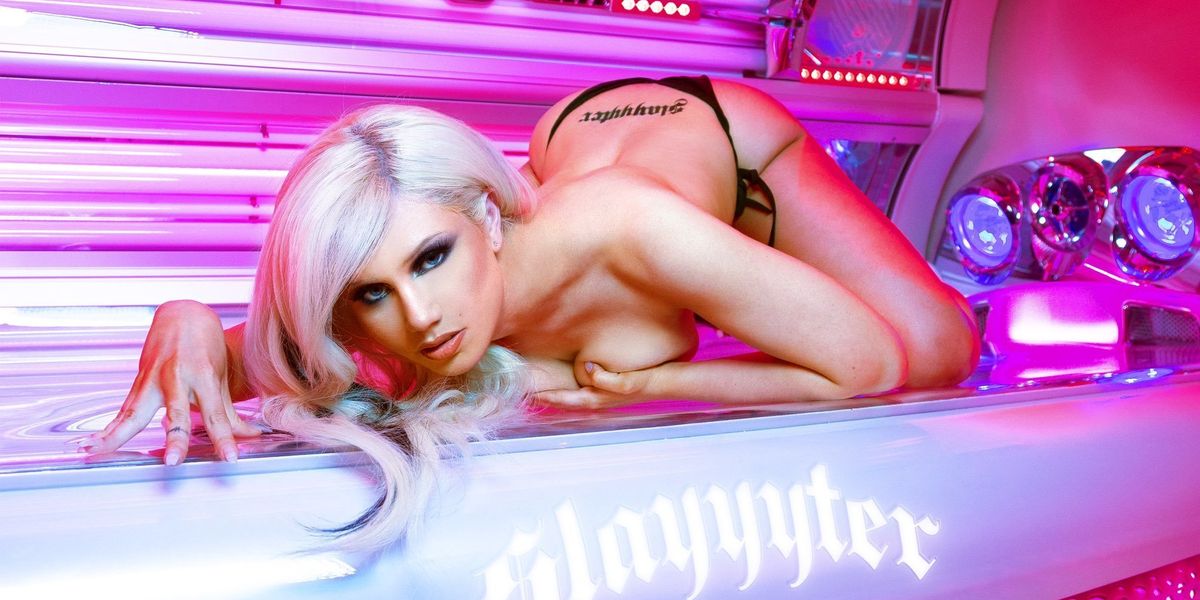 It feels like the first time we heard the mounting opening buzz of Slayyyter and Ayesha Erotica's "BFF" was forever ago, when in reality, only a little over a year has passed since PAPER first came across hyper-pop's newest darling on Twitter. In September 2018, her follower count wasn't sitting at a staggering 50k+ as it does today, she wasn't a "live performer" in any sense of the moniker, nor did she have an entire mythology of new and unreleased songs attached to her name.

Still, even then, it was only a matter of time before the DIY-turned-main pop girl hit it huge, propelled by her unique grasp on mid-2000s pop tropes. Over the past 12 months — assisted by word-of-mouth, press fervor, and of course, Twitter — Slayyyter has managed to cultivate unadulterated standemonium, from seed, to sprout, to stardom. Oh, and a 14-track mixtape with hits to spare for the next one.

The self-titled project is a monument to the singer's sense for earworm phrasing and the "just right" amount of autotune to layer on top of the sex-slicked melodies. The majority of the singles she's released over the past year make an appearance on the tape, with the genesis of Slayyyter's career as we know it, "BFF," opening. There's plenty beyond the singer's origins to explore as well, though, with variety of new potential hits make an impact around the project's midpoint. "Motorcycle" is the bass-slamming pop antidote that follows the Hills-fueled grit track, "Daddy AF," a back-to-back moment of pure dirty fun.

It's easy to envision the songs being played at live shows as well — and many, despite seeing wide release today, have already become fan-favorites at Slayyyter concerts. "Celebrity" is one of those tracks, 100% in-conversation with Paris Hilton aesthetics, translated straight through to glitzy synth samples and risers. One of the standout songs happens to be only one of two tracks on the mixtape with a feature — "E-Boy" is the melt-in-your-mouth Gen-Z fantasy track for lovelorn 10th graders on TikTok. That Kid appears on the track with a verse that mainlines the days of Disney Channel-charting pop songs straight into your veins: "Got you sayin 'oh god damn!'/ Every time I turn on my webcam/ Watch me take it off on screen/ I know that you wanna get with me."

Perhaps the most moving part of the new project ends up being its conclusion, "Ghosttt." The song is a rework of one of her first singles, "Ghost." The new iteration is slowed down, souped up, and drawn out. The dreamy track's twinkling rebirth is a lasting reminder of the power of the internet — not only did it launch Slayyyter into a life as a career pop star, if you've got the right stuff, it could for you as well.