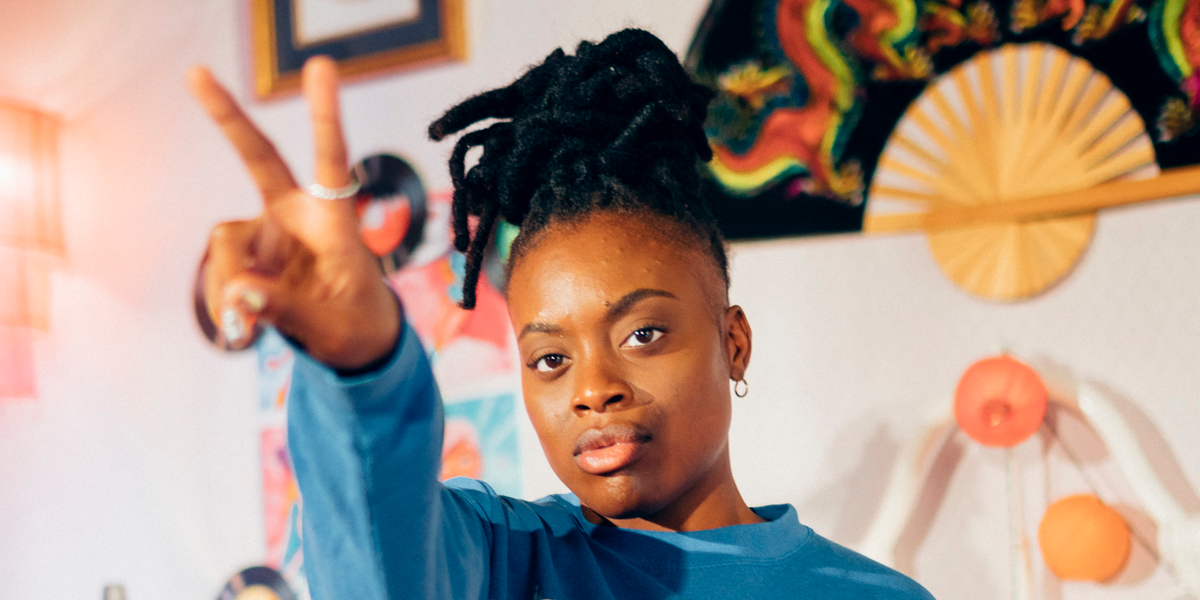 There are no pop stars that look or sound like Siena Liggins — and she's well-aware of that. Rather than let a homogenous music industry hinder her through, the Detroit-born and Atlanta-based artist is using this to fuel her work. Ms. Out Tonight, her ambitious 12-track visual album out today, is Liggins' official entrance as a queer woman of color with a strong point of view. "It's beyond time to disrupt the norms," she tells PAPER, "and there's room in the pop space for all of us.

Like all great pop projects before it, Ms. Out Tonight is a fast-paced sensory overload, kicking things off with a nostalgic pajama party before joining Yung Baby Tate on the sexed up "Dirty Girl" and later dancing in a giant banana suit. She's previously described her music as "tweetable," underscored by her IG bio, "hide ur girlfriend," and offers up bite-sized music that strikes the perfect balance between playful and provocative.

"Ms. Out Tonight is a double entendre about being faced with an option of authenticity versus the cost of missing out on all life has to offer unless you opt for the real you," Liggins says of the project, which prioritizes an honest approach to songwriting. She adds, "I sing about my life, so I talked about girls I've had crushes on and feelings that they've given me. But overall, I really express what it feels like when I live in the moment."

Below, PAPER premieres Siena Liggins' debut, Ms. Out Tonight, and learns more about how she's "opening up" her own space in contemporary music rather than just "filling" one that already exists.

Why was it important for you to tell the story of Ms. Out Tonight entirely through visuals?

Look at Britney and Gaga and Ariana and Miley and Doja and Billie and a thousand others — then look at me. It was essential that I tell the story of Ms. Out Tonight through visuals in order to really drive the point home: it's beyond time to disrupt the norms and there's room in the pop space for all of us. Anyone can be out as Ms. Out Tonight without missing out on all that life has to offer when we just go for it, and go for it wholeheartedly, honestly and confidently.

"I really express what it feels like when I live in the moment."

What are the key themes that you explored on this album?

I really worked to make this album into an homage to many of the musical influences that have made me. It's sexy and tongue-in-cheek, and so good at full volume with the windows down. There's a lot of early 2000s reference paralleled with some of the attitude that I've picked up since moving to Atlanta from Detroit. I sing about my life, so I talked about girls I've had crushes on and feelings that they've given me. But overall, I really express what it feels like when I live in the moment.

What larger story do you think Ms. Out Tonight tells?

We're all constantly, either consciously or not, making decisions about who we want to be. It's always easier to be honest about who you are when someone else has lit the path and shown you what's possible. Ms. Out Tonight is a double entendre about being faced with an option of authenticity versus the cost of missing out on all life has to offer unless you opt for the real you.

How involved were you in the art direction of the visual album?

I'm so grateful that I have friends like Maddie Ivey to call when I get a crazy idea like building my pre-teen self's dream bedroom or eating chicken nuggets while wearing a banana suit. I had the idea to do a visual album shortly after choosing the tracklist as I was struggling to choose a single. Imagine my excitement when I asked Maddie how she liked the idea of a visual album, and she jumped to creative direct and style. The two of us along with Erini Sadek, who produced the visual, were a great team of women who really bossed up for the one time.

Is there a moment in the project that you feel best represents you as an artist?

This visual album and body of work in its entirety is really who I am as an artist and project manager and overall obsessively hands on person. "Flowerbomb" will always be a song that speaks true to who I am because when I wrote that song I wasn't sure about what the future might hold, but I knew there was a future and I was going to go get it. I was truly living in that moment before Ms. Out Tonight had even become a thought. In my mind, that was a pure representation of me as an artist.

"I see myself opening up space rather than filling any."

Barbie dolls show up throughout your visual album. What do they represent?

They're always close to me in a lot of scenes and they represent one of the things I believe to be flawed with the industry's approach to women in pop music. In a world that seems to be catching on to the importance of representation, sure there are young, bold, off-center folks looking for themselves in the pop music space. And even more specifically, dark skin, queer, androgynous, fluid. If you watch closely, you see Barbie stuck with voodoo pins; another scene she's in a bubblegum pop machine and again when I've collected her in mason jars. Hopefully as you listen and watch along, you think about the contrasts and similarities between all the girls in pop that we represent and why there's a need for us both.

What space do you see yourself filling in music, right now?

I see myself opening up space rather than filling any. How that space continues to grow and open up is really dependent on the other incredible artists who are working and dreaming and fighting alongside me and whoever comes after us. I just want that space to be one that isn't homogenous and is filled with love.