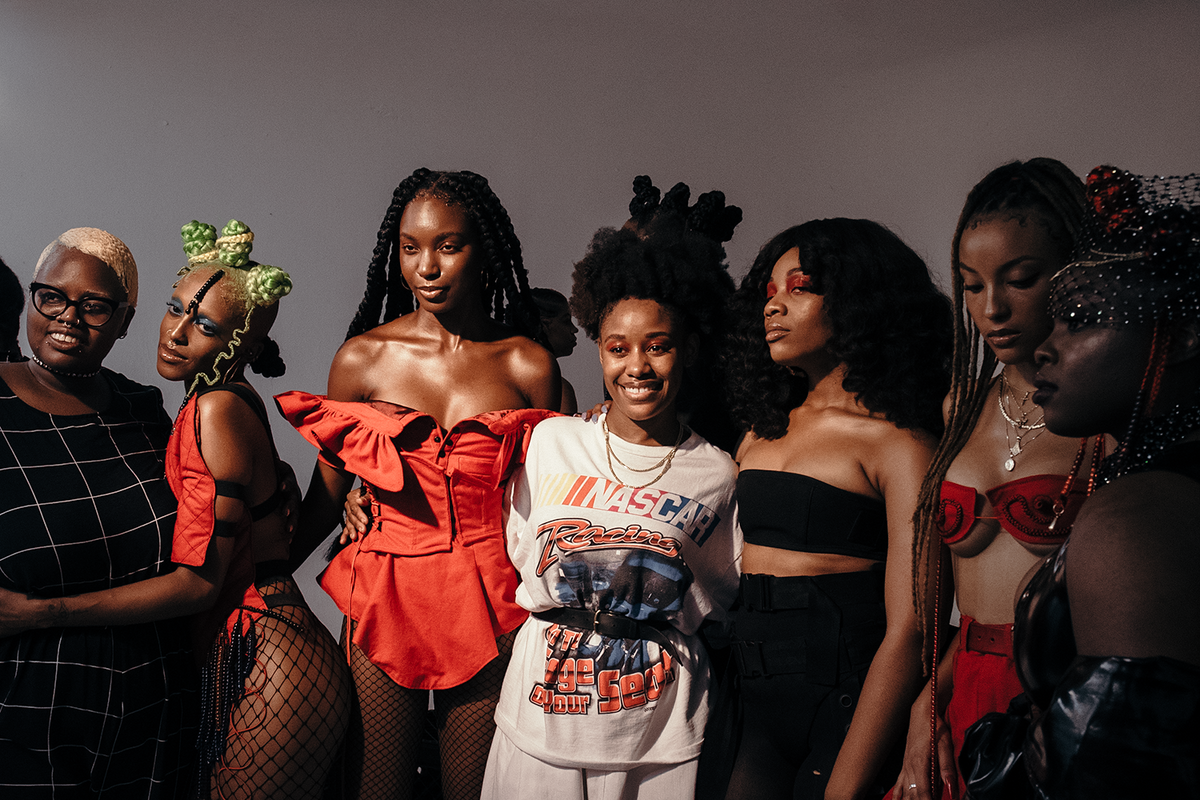 Rising design star Shanel Campbell launched her eponymous spring collection to kick off New York Fashion Week, and everything about it was a pro-Black family affair.

Campbell, a Parsons graduate and Bronx native with co-signs from the likes of Solange Knowles and Teyana Taylor, put on a stunning, self-produced red and black show that was unapologetically about centering Black women. What's more is she casted the 17 models herself, secured sponsorship from Jeffrey Campbell, whose shoes featured prominently in the show, booked top-tier hair and makeup talent, and found the venue.

PAPER caught up with Campbell post-show to chat about everything from the show's central themes of diverse Black women to challenging herself as a designer to the significance of the color red.

The show is beautiful. Thank you for your work. Can you tell me more about the show's central theme?

I think my central theme was kind of a mental purge of my life experiences until now. The grounding concept was Black women, but that's still very general. Just because you're a Black girl doesn't mean you should be clearing one type of box or category. You can be a little bit of this, and a little bit of that. The girls got that theme across because they were all kind of chilling and hanging out with each other, just vibing and dancing together. There's no one type of Black girl, and I just wanted everyone to see that. There are some who are dramatic, laid-back and sweet.

Tell me about your decision to use crates in the show.

I used them because that's what I saw people sitting on growing up in the Bronx. Using crates was also me trying to take experience of being Black growing up and take things that people would consider ghetto or hood or inappropriate or unclassy, and elevating them. Who defines what's hood? Who defines what's sophisticated? I just wanted to challenge that narrative as a Black woman.

Also, Black women is always a theme that's never not relevant, let's just be real. How did you find the women who were in the show?

[Laughs.] I did all the casting myself. I didn't have a casting team, which was difficult, but worth it. I do a lot of things now that were hard for me to do, because I reached out to the makeup artist; I reached out to the hair stylist. I emailed Jeffrey Campbell for sponsorship, and I also reached out to Doc Martens, but went with Jeffrey because they had more range in the height of heels. But basically, I did it all myself. The girls I found on Instagram, because I wanted to have as much range as possible. I didn't want any part of this to feel too complacent. Personally, I find runway shows kind of dry because everybody ends up looking the same, and I thought it was super important, on the theme of Black women, that there is no one type of shade, hair texture, etc.

I appreciate that. You also brought in Raisa Flowers for the makeup, who did a range of colorful eyes and nude lips for the beauty looks. Was that a collaborative vision?

She's so amazing. It was me and her. Some girls, I wanted to have a little less, some a little more. There's no one type of theme. The underlying theme is just Black women comes in all colors and sizes. I wanted to have uniformity with the color, that's why it's so red and so black, but mostly red, because I wanted to challenge myself as a designer. If you take the blackness out of it, and you have a collection with mostly one dominating color, it's more interesting that way.

Red is a very difficult color. It's a power color, but sometimes people look at it like it's hard to pull off unless you have a certain kind of personality. How did you decide on red as your primary color inspiration?

Yes, me wanting to challenge myself, but also, this collection comes from my anger toward certain things in the industry or being Black in America. Red represents that, as well as the trauma that Black girls and women go through regarding colorism, being underrepresented, and dealing with intersectionality. All of those things represent red. For me, red is a color of intensity. It's not supposed to be soft and sweet. It's not a soft and sweet collection, but if you see the photos, no one is too smiley, it's just kind of intense.

But it also seems like everyone is friends, too.

We all really got along. Not everyone knew each other, but there was an immediate family dynamic. There was a moment where I got emotional backstage and was noticing how many Black women who were models, stylists, hair and makeup artists, designers, so it was extremely powerful.