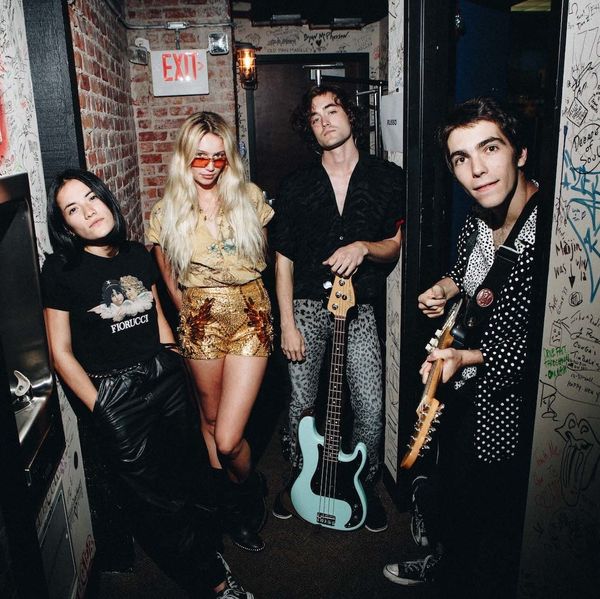 RUSSO Gets Bloody in Video for 'Loudmouth'

Cailin Russo hails from a pop-punk pedigree having grown up under the guidance of her father, Unwritten Law's Scott Russo. In the past year, she has quickly emerged as a sparkling new talent in the past year with a soulful voice and an incredible fashion sense. Now with the help of a full band, RUSSO is set to release their first EP, House With A Pool, which is a grunge-tinged summery take on pop-rock perfect for poolside listening or skating through the suburbs.

"Loudmouth" follows the band as they romp through an abandoned warehouse bopping along to a summery chorus of infectious "WowOhWOwOhs". Vintage psychedelia vibes clash with grainy grunge aesthetics as Russo's disembodied head spins around the screen interspersed with carefree headbanging. The raucous energy escalates as the band starts throwing punches at one another getting bloody as they stumble through narrow hallways. The video gets progressively disorienting with a growing sense of dread that maybe RUSSO isn't alone in that warehouse.

We caught up with Cailin Russo on the eve of House With A Pool's release, to talk about the video, the EP, and get the answers to some crucial questions:

How did the idea for the video come about?

CAILIN RUSSO: The idea for the video started off pretty random, the direction was more so like Frank Ocean's "Nikes", very tumblr cool, pretty visuals. As we got on the phone to the directors, the storyline evolved until we got to having gore and making it more eerie. We kept the story line loose until the day of the shoot where we finally had some kind of fucked up narrative which was these kids go this warehouse to blow off steam and get weird (it escalates quickly) and we end up all fighting each other. Pulling hair, ears and teeth out. All because we needed to get out all our energy. We can't keep it on our tongues.

Let's talk about the EP. What can people expect?

The EPPPPPPPPP! 'House With A Pool.' Or HWAP as we like to call it. Is a sad, sad record about an orphan mouse. Just kidding! The EP is sick. It takes you everywhere. All the songs are emotive, in some capacity whether it's wanting to get drunk on cheap beer or lay in your bed and cry about heart break. The overall feeling is angsty but nice. You're grandma might like it. Its written super well and I couldn't be more proud of our first project.

Where do you typically draw inspiration from?

Inspiration is always super vast. I can definitely say my inspiration comes from all different walks of life. Inspiration comes to me at parties, in the middle of hard conversations, in shit situations. That's usually when I write the most, when I'm mad or sad. As far as real life inspo I would say I'm actually right now really inspired by Azealia Banks, Jungle, Dead Sara, Gwen ("Cool" is one of my favorite songs of all times). And classic inspo is all the greats, Janis Joplin, Amy Winehouse (not just stylistically but her writing was outstanding- it was so detailed) Frank Ocean. Frank Sinatra. Amy's Album "Frank". Frankly, franks are sick.

Mall goth AND vampire goth. I would chose to wear a Victorian puffy assed queen-esque top with a sick mall goth y2k Bratz doll bottom half. Platform boots and all.

The EP is being released on Friday the 13th so in keeping with the theme, how would you avoid getting killed in a slasher flick?

I would get killed in a slasher film. A scene that is burnt into my brain, is the scene from final destination: "Rollercoaster Of Love" plays in the background and the girl gets into the tanning booth, as shes tanning, listening to the music, something happens where water leaks into the electrical circuit causing an object to lock the girl into the tanning booth and turn into smoked turkey. And how would I escape? Idk I'm a survivor (self proclaimed) but I love an obvious hiding spot so I would probably be behind the door when Michael Myers is in front. I'd hit him in the back of the head with a gold trophy and then make a run for it but since it's Michael Myers I never get away fully.

RUSSO's EP House With A Pool is out July 13th and you can catch the band at one of their upcoming tour dates here.