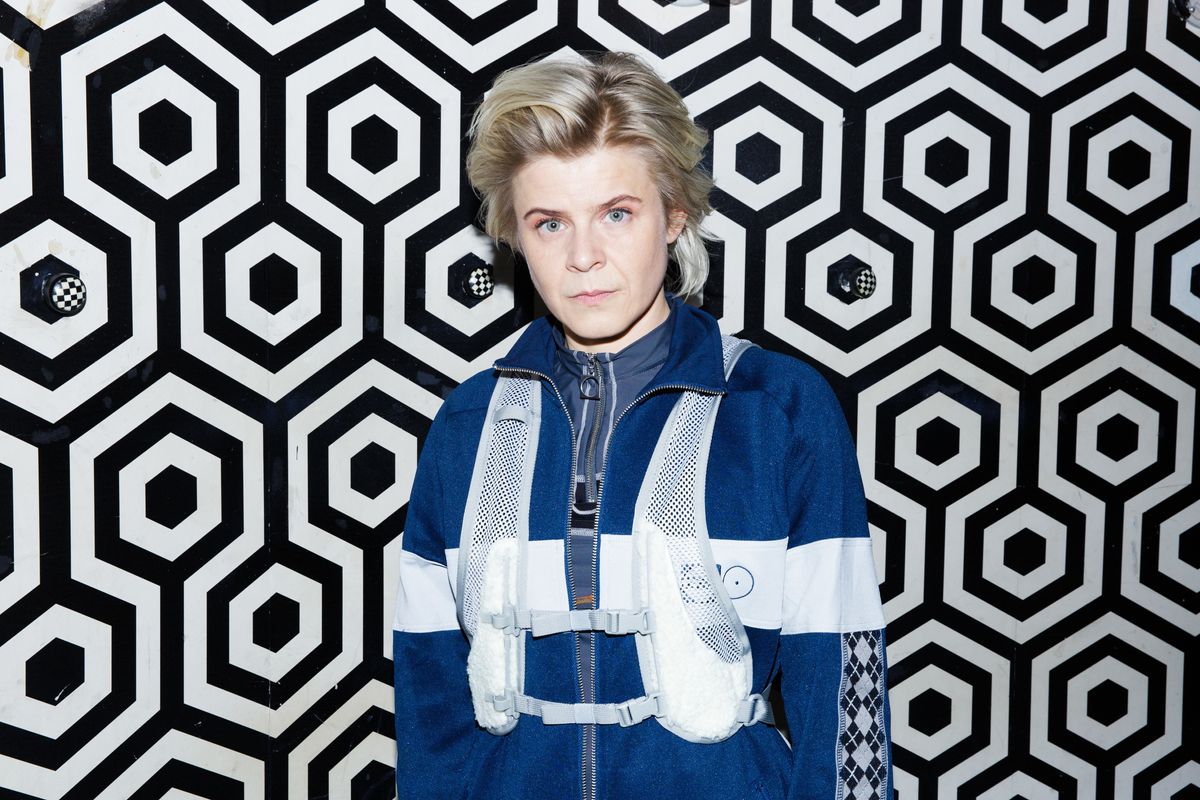 When Robyn called up Opening Ceremony's Humberto Leon and asked if his store would stock her new capsule collection with Björn Borg — namesake label of the legendary Swedish tennis player — he said yes before even knowing what the clothes looked like. "We share a very similar feeling about the importance of community," Leon explained to PAPER at the collection's New York City launch party, held Thursday night. "You can just call someone up and say, 'Hey, I'm doing this thing, will you represent it?'"

There are no regrets, obviously. RBN x Björn Borg — designed by Robyn and longtime friend Naomi Itkes, a stylist — sits at the highly wearable intersection of clubwear, sportswear, and streetwear. The big fluffy hoodies (emblazoned with a unique record sleeve logo by Anders Haal), heavy 70s-style tracksuit sets, and skintight jacquard knits look more than at home on the Opening Ceremony shop floor. Leon and OC co-founder Carol Lim also worked with Robyn to produce exclusive merch for her United States tour, only available online and in their New York City stores.

Itkes and Robyn, also celebrating at Opening Ceremony's flagship Howard Street store, said their collaboration is inspired both by their own wardrobes and the idiosyncratic fashion of Borg. Itkes had been working with Björn Borg's design team on a separate project, and happened upon a treasure trove of the label's archival pieces. "As I was digging through I had to call Robyn, like, 'You've got to see this, so good,'" Itkes recalled. "And they were super open to doing a collab, however we wanted."

The result is a set of carefully updated retro styles that pay tribute to an underrated sartorial icon. "The way Borg dressed in the 70s, well, at that time Sweden was a small little place," Robyn explained. "We hadn't had any big pop stars or sports stars, and he came from this very working class area in Sweden and was just put out into the world and became a big sports star. He was wearing little shorts, he had this long hair, he went between wearing sportswear and, like, big furs. He was at Studio 54, then he was back in Sweden with his dad, this working class tennis coach. It was this combination — of little Sweden, and the world."

Robyn has been rocking tracksuits since her early Max Martin pop years in the late 1990s, when the style became synonymous with club music. She has always loved to dress this way, and noted that sportswear and streetwear are inherently democratic: easy to wear, and relatively cheap to purchase compared with other designer clothing. "And that's a beautiful thing," she said. "The way you mix sportswear with other clothes is a very particular statement, it's not really about fashion, it's more about sending signals about where you belong musically, or politically."

Making the collection unisex was a literal no-brainer. "It came naturally, I don't think we thought about it until we had to think about sizes — we just assumed that of course we were making this for everyone," Robyn said. "And that's what we've done, with this collection," added Itkes. "It's about belonging and inclusivity."