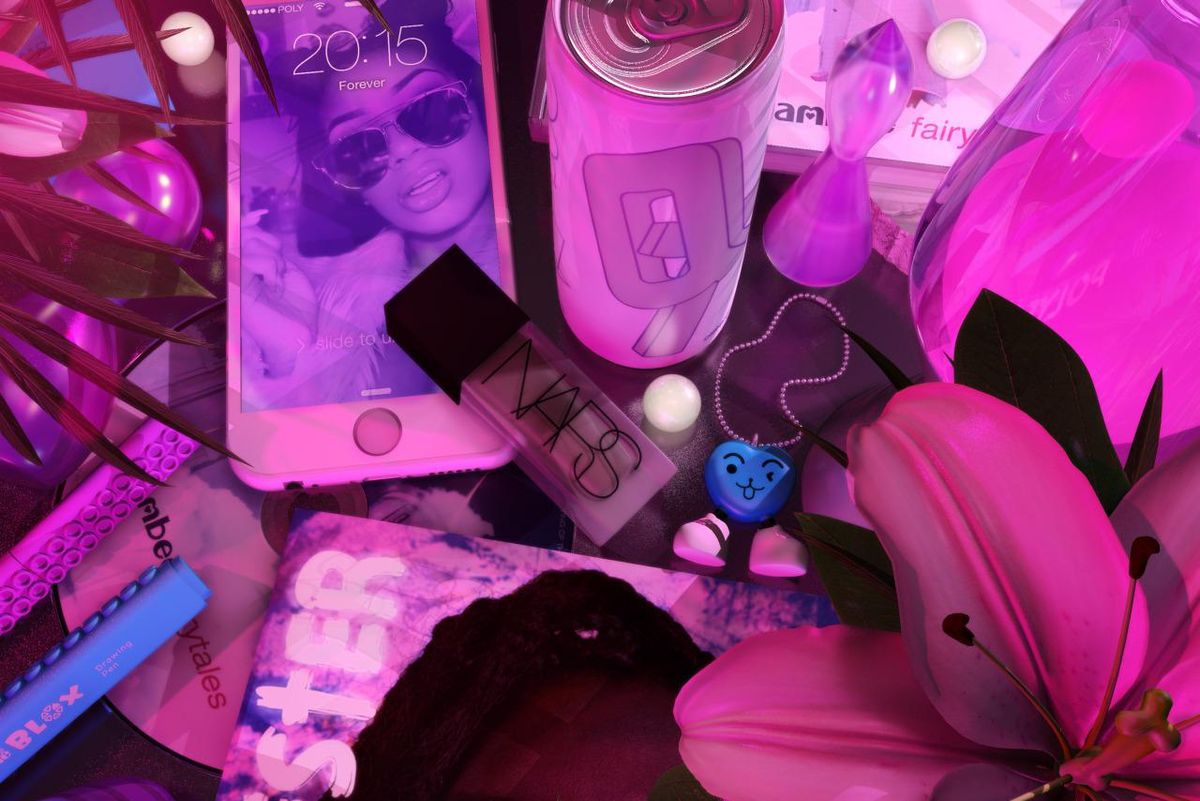 When Terrell Davis was young he was often asked, "What sport do you play?" To which he would reply that he didn't play any sports. "And then he'd put his hand up," remembers his mother, Linda Davis. "He had a pen in his hand and said, 'This is my sport.'"

A champion of the digital art movement, a pioneer of neo-Y2K aesthetics and an active member of the LGBTQ+ community, Terrell created work throughout his life that left a lasting impact. On December 30, 2020, the world lost the 22-year-old artist, following an unexpected absence during a brief period of illness. Terrell had just graduated from the School of the Art Institute of Chicago in the spring of 2020, where he had received a partial merit-based scholarship, with a bright career and a full life ahead.

Terrell began working in print when he was young, but as a teen moved entirely to digital, scouring sites like DeviantArt, Myspace and Tumblr for inspiration. "Once he switched to digital, he never went back," Linda says, detailing how her son's passion flourished in high school, when he was gifted his first iMac from known art curator Diego Cortez by way of Nick Dangerfield. Terrell immediately developed his own signature style — a mix of bubbly, euphoric pop culture references nodding to the early noughties and today's consumer-driven culture. "He was always very fond of pink," Linda says, "and he couldn't understand why pink was just for girls."

Speaking to PAPER in 2016, Terrell said his work relied heavily on "bling, sparkles, jewels and simply opulence in some form or fashion." He continued, "I grew up with this fantasy of wanting to be rich and famous, and own a lot of jewelry and diamonds, not knowing how unrealistic that was as a young, jaded gay kid. In a lot of ways, I couldn't properly represent myself the way I wanted due to social norms, as well as personal insecurities I'm still learning to confront. Now, I take that bit of courage that I grew over the years and channel it into my art."

To celebrate Terrell's legacy, Zoom's OG queer rave Club Quarantine hosted "TERRELL FOREVER," a live memorial featuring sets by LSDXOXO, Ariel Zetina, SCRAAATCH and one of his closest friends and colleagues from college, Jesus Hilario-Reyes. The virtual service honored Terrell's wishes by including a performance from Shea Couleé, Season 5 winner of RuPaul's Drag Race All Stars, which was among the late artist's favorite shows, according to his mother. He enjoyed that its competitors were able to "express themselves," Linda says. "That's where he wanted to be: where he could fully be his authentic self."

Terrell worked closely with the creative team behind Club Q, designing their rainbow sphere icon, merch and virtual sets for different performances throughout lockdown. He was an active participant of the dance party, though he always kept his camera turned off to maintain privacy. Club Q Co-Founder Brad Allen notes how Terrell's lack of public persona plays into the "beauty of discovering someone through their art," adding that "[Terrell] cherished art in the most purest form. I think that showed through his generosity of creating what he created for us — that art itself is an act of sharing."

Soon thereafter, Terrell became pivotal to Club Q's rebrand at the height of their success. "Terrell did better at Club Q than us, that's the headline," Brad says, describing Terrell as a "generous soul doing what he was put on earth to do in its most simplest form." He even came up with Club Q's tagline, "Which is 'Anywhere, Everywhere,' and again was not a design element," Brad continues. "That was Terrell just coming up with that for the shirt. So that's why we connected so much to the work, because it was coming from someone that you knew understood the space."

Outside of queer nightlife — and Terrell's work creating flyers for pre-COVID parties in Chicago – the artist's collaborations infiltrated music where his Y2K aesthetic aligned perfectly with different releases. "Terrell had a love of music, and it was all music," Linda says, referring to projects with everyone from Abbi Press to Astral Plane Recordings. Most recently in June 2020, he created the cover art for Andrea Valle's LOVERGIRL EP, which placed her within a red-and-pink, Valentine's Day-inspired world. He later built virtual sets for DJ Doss at Lady Gaga's Chromatica fundraiser, hosted by PAPER and Club Q, as well as at Secret Sky Fest, further establishing Terrell as a key player in the industry.

In 2015, underground pop star LIZ collaborated with Terrell on the cover art for her SOPHIE-produced single, "When I Rule the World." The image recalls a childhood bedroom at the climax of Britney Spears' career, featuring nostalgic objects like a Tamagotchi and pink BAPE snapback. The cover's focal point is a digitized rendering of an old cellphone, which displays LIZ as the wallpaper. "Terrell's style was so specific and that's what made the art for 'When I Rule the World' so iconic at the time," LIZ says. "It lives in such a cool time capsule now, yet it could be released today and still feel fresh."

Later in his career, Toronto's self-proclaimed "Queen of Floss-Pop" Sabby Sousa tapped Terrell for the cover of her single, "Sundae Thot," off 2019's The Dream Palace EP. True to his work, the image displays Y2K memorabilia — a Louis Murakami charm, vintage Dior necklace, Motorola Razr — as well as a spoon, referring to both the sweet innocence of ice cream and the drug use of 2000s party culture. "You would have really had to appreciate the era, and know the fashion and style of the era to remember all these things," Sousa says, describing Terrell as a "museum of Y2K."

And then there's fashion: Last summer, Terrell worked with Opening Ceremony Co-Founder Humberto Leon on a design for their collection of limited edition Pride tees. Leon had been following Terrell's work for a while, and when brainstorming collaborators for the project decided he wanted an entire rollout led by queer creatives. The pink shirt features a design typical of Terrell's surrounded by the statement, "Gay people in solidarity with all oppressed people." Leon says "there's such strength in those words," adding that Terrell "really brought those words to life. These are words of protests, posters and things. So to give it this equal energy of creativity, I felt really showcased how well he interpreted the project."

Terrell's references may have looked to the past, but his work flourishes today — especially during the pandemic. In a period of confinement inside our apartments while many are forced to move back into parents' homes, we cannot help but reminisce about a simpler time when "the Motorola Razr was the future and going to take us to the moon," as Allen says. LIZ adds that Terrell's "futuristic Y2K aesthetic really set the tone for most art you see now in what's coined the 'Hyperpop' community," while Jesus says Terrell went on to become "one of the leaders in the revival of Y2K aesthetics."

Terrell Davis was certainly a name you were going to hear more of in the future as a force transforming digital art, but "it's now our job," as Brad notes, "to help the art evolve and move" — especially since Terrell can't be here to do so, anymore.