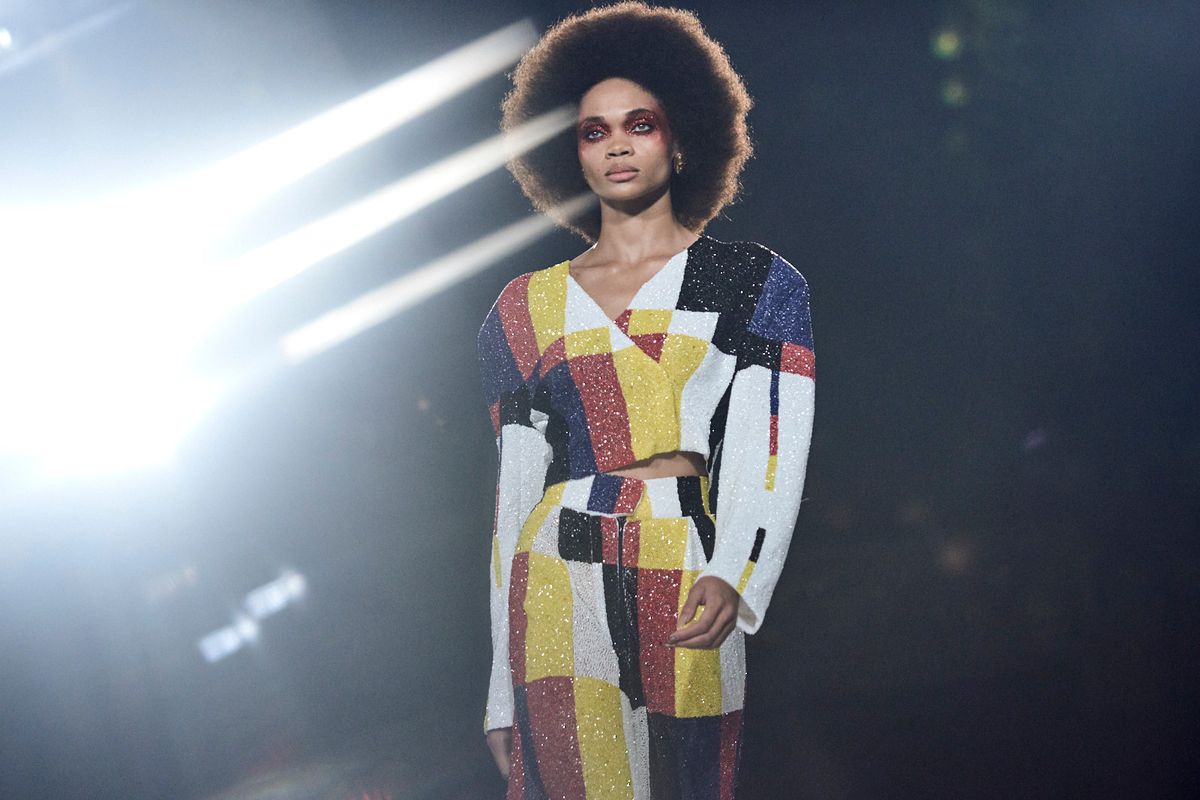 Pyer Moss Delivered the Biggest, Most Powerful Show at NYFW

"A queer Black woman invented rock 'n' roll," writer Casey Gerald declared in a rousing speech delivered at the beginning of the Spring 2020 Pyer Moss show, held in Brooklyn's historic Kings Theatre. She did. In the 1930s and '40s, Sister Rosetta Tharpe (who recorded her first single at 23, in 1938) was a rarity — a Black woman who played the guitar and sang both gospel and secular music. She toured, forced to sleep on the bus when playing in segregated cities. She became popular among Black servicemen during WWII, and collaborated with the likes of Duke Ellington. She even toured with her musical and romantic partner, the musician Marie Knight.

As Gerald correctly asserted, Elvis didn't invent rock 'n' roll — there was Tharpe and Little Richard and Chuck Berry and Jimi Hendrix. And so the night was largely dedicated to Black music; Pyer Moss shows usually incorporate a choir, and this season's was enormous. The "Pyer Moss Tabernacle Drip Choir Drenched in The Blood" incorporated 65 singers and took up the entire stage, performing everything from gospel classics to Lil' Kim, Missy Elliott, and Cardi B. The audience was absorbed in their performance, and then you'd notice the beauty in the cut of an evening gown or a men's pant (the men's trousers were really, really good). It was overwhelming, like getting smacked in the face with aesthetic stimulation.

The collection, titled "Sister," was the third in a series of collections celebrating how Black people have shaped the building blocks of American culture. It was in part dedicated to Tharpe's oft-unacknowledged contributions to musical history. Designer Kerby Jean-Raymond used a painting of Tharpe from artist Richard Phillips, who spent 46 years wrongfully imprisoned in Michigan for a murder he did not commit, as a print on a number of garments. As Jean-Raymond told GQ's Rachel Tashjian, he only reached out to Phillips once he knew that he was in a position to make sure he got paid, and paid properly.

Jean-Raymond — who also holds a major position at Reebok, was recently named to the board of the CFDA, and is starting a new company with Kering CEO Francois-Henri Pinault — makes work that centers on a reclamation of American history, and fashion history in particular. The last three collections have included collaborations with Cross Colours, then Fubu, and now Sean John. The clothes on the whole were largely crisp and clean with a wide-shouldered silhouette, the silk liquid, like mercury in a thermometer.

It was Jean-Raymond's first show in a year, and he gave away free tickets to dedicated fans, who lined up all around the block (there wasn't favoritism in the line — the show started 90 minutes late and important people were kept waiting like everybody else, which is always kind of a nice sight at fashion week). "That took me to church," a man in the lobby said as the venue transitioned from show to afterparty. "No... to heaven!"