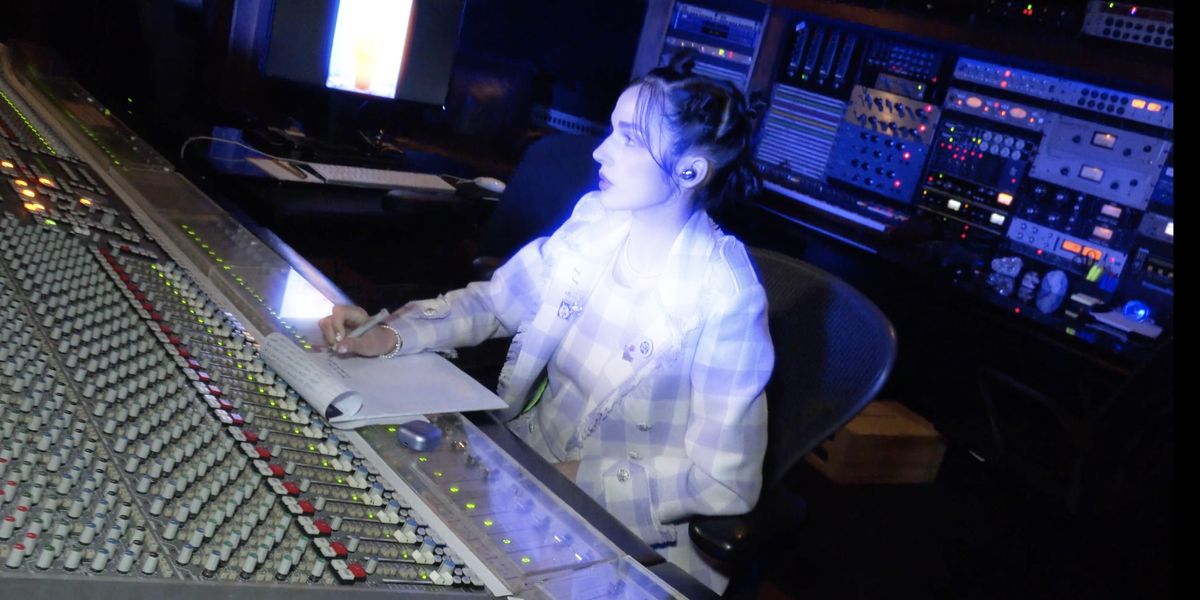 Well-known for presenting herself in robotic semblances across viral YouTube videos, this explains a lot: As a kid, Poppy's mom would play her sine waves on a keyboard. At its purest, a sine wave is how we represent sound visually, but it gets more complex from there, with square waves, sawtooth waves and even triangle waves.

That bedrock info is enough to understand how exposure to technical expressions of sound influenced young Moriah Rose Pereira, now Poppy. A great capacity for experimentation can come from understanding the very foundations of anything — and today, Poppy is a veritable vanguard of experimental pop music.

Consider the synthetic bubblegum pop of her 2017 full-length debut, Poppy.Computer; it was groundbreaking then and remains distinctive today. Playing with the digitalization of our lives, Poppy held up a mirror so we could see our online selves: The countless selfies, so many memes memorized and even the video clips recorded, but never shared publicly. She did this not only through lyrics, but by juxtaposing organic sounds — like acoustic guitar or the ticking of a clock — against chiptune synths and other electronic sounds intentionally manipulated to extremes.

The mood: It's real, but it's not, but it is. Continuing the lore of Poppy being an actual robot through her YouTube, of course, complemented this.

From there, her art sprawled to include electro-pop and new wave influences, though always with that singular Poppy bend that manages to touch on multiple realities in a universal way. The super-hit title track off her sophomore album, Am I A Girl?, is an exemplary actualization of that. Despite its robot perspective, the lyrics resonate with actual humans because everyone has questioned the idea of gender, at least to some degree. The tone of the song, from its wandering synths to its hard-pounding percussion, rings like an inquiry that ranges from curious to frustrated to furious.

Most recently, though, rock has come to the forefront for Poppy, but really, it's an influence that's always been audible, albeit at varying levels. Last year's I Disagree has been described as driven primarily by nu metal. To label Poppy's music so narrowly, though, is to also flatten it. She is not a single sine wave: never has been, never will be.

The best way to hear this truth? "I would prefer listeners of my music to listen on headphones at the highest possible volume," Poppy tells PAPER, explaining how this helps her become the most immersed. "I like to feel like I'm within the music."

Among her catalog of favorite artists and primary influences is David Bowie, whose music also benefits from the absorption that listening with headphones can provide. The icon created other worlds through his music, after all. Closing off the outside world while listening is the closest you'll get to feeling like you're truly in his imagined realms.

"He has music for any mood," Poppy says of Bowie. "And every era that he's moved into, there's a progression and an experimentation that I really identify with. And I feel like it resonates with me deeply."

Is Poppy's own mood, of late, an angry one? Music to Scream To implies as much. The six-song EP, which dropped not long after I Disagree, is entirely without vocals. Rather than a singalong, its digital screeches, near-silent stretches and altered ambient noise offer the listener an opportunity for an improvisational shoutalong instead.

Beginning with I Disagree, it's been repeatedly said that Poppy's made a major shift in sound. While one style may take a larger share of the spotlight now than others, to say that she's released something wholly unprecedented isn't accurate. Listen to her earlier albums closely — with intention and via headphones — and you'll find the nu metal and hard rock is in there, like backup singers to the starring synthetic sweetness. Only now, she's really leaning in.

"I would prefer listeners of my music to listen on headphones at the highest possible volume. I like to feel like I'm within the music."

"I would prefer listeners of my music to listen on headphones at the highest possible volume. I like to feel like I'm within the music."

Portishead is another one of Poppy's influential faves, introduced to her by a songwriting partner, she notes. The band is renowned for its extremely intricate and layered sounds, yet has been historically categorized as trip-hop. That genre, at least, is agreed-upon as a blurry one, being a melding of hip-hop and electronic. But when you listen intimately to even the band's 1994 debut, Dummy, more sounds become evident, from orchestral moments to gospel touches to incorporations of harsh industrial made subtle. From there, Portishead's output of albums — consider especially the most recent LP, 2008's Third — has further defied cut-and-dry classification.

Poppy's music is similarly uncategorizable — limitless, really. It's only through dedicated listening, though, that the breadth of styles within can be fully appreciated. In every song there is a virtually infinite number of sine waves, all working together to represent so many different styles.

Look further back to 3:36 (Music to Sleep To), Moriah Rose Pereira's inaugural EP as Poppy, with its collection of cinematic instrumentals. The complex moods inside it — tonalities like a dark abyss to hopeful chimes and gentle, comforting loops — belie the title. Or maybe it's all a commentary on the diversity of sounds that people like to snooze to. Whatever the intention, there's no denying that 3:36 contains multitudes.

On "Fear of Dying," released late in May, Poppy turns ever-so-slightly softer than the recent heaviness by joining nu metal with pop-punk and a vibe akin to Celebrity Skin-era Hole. Her very latest is an EP dubbed EAT that doubles as the soundtrack to an upcoming NXT pro wrestling special. "Dark Dark World," specifically, is the event's theme song and it's a searing metal cut.

But if you're listening closely, in that EP and the rest of Poppy's recent, guitar-heavy work, you'll find the lightest shades of her digitized, more synthetic trademarks. They're still there — just like rock was all along a part of Poppy's endless arsenal of beloved styles, influential artists, fundamental sine waves and so much more.