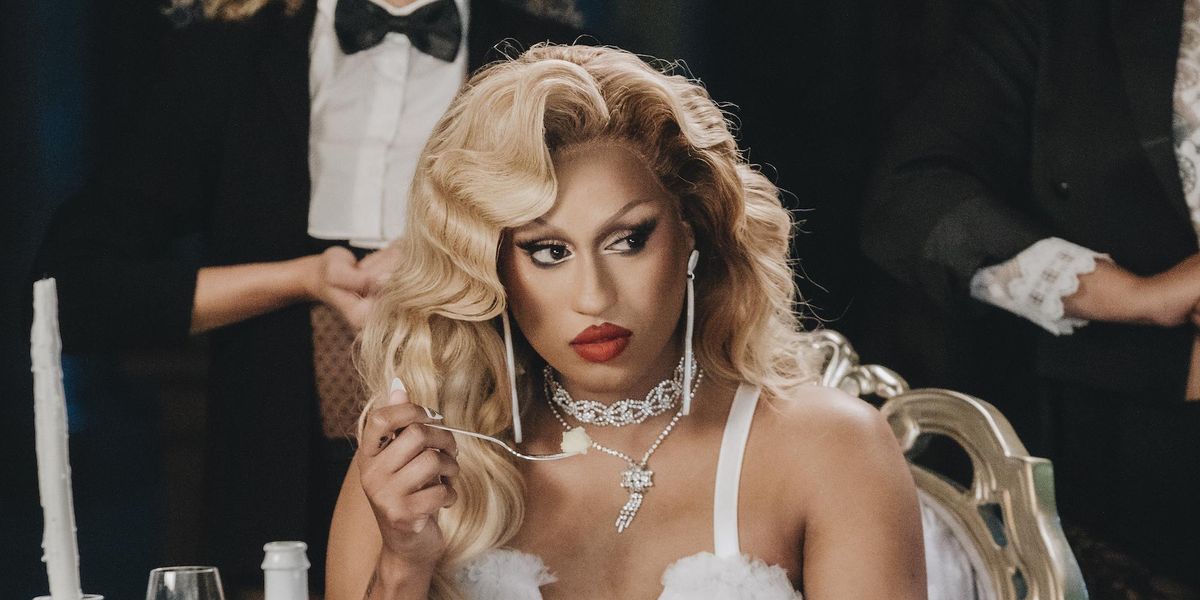 Come Get a Piece of Priyanka's Cake

Nearly one year ago, 12 drag queens were vying to become Canada's first Drag Superstar. Season One of Canada's Drag Race premiered in the middle of the pandemic last July, and by the end of that summer, one queen had snatched the title and begun her reign.

The alter-ego of 30-year-old Mark Suknanan had already started becoming a well-known name in Toronto before appearing on the show, even earning the city's Number One Drag Entertainer title. Add on winning Canada's Drag Race — becoming the first West Indian winner in the entire franchise — and she was set to propel into international stardom. But the pandemic stunted that growth.

"I won over all of Toronto by performing at the bars and competing in competitions at those bars. And just being a dumb, drunk idiot performing a Beyoncé megamix and having a good time and really connecting with people," she tells PAPER, adding that she's a people person and misses performing live. "It's wild to me that the audience of Drag Race hasn't got to meet that version of me yet."

To help change that, Priyanka is set to release her debut EP, Taste Test, on July 16. It's a five-song collection, accompanied by music videos, that peeks into her life. She describes the EP as a "pop masterpiece" riddled with real-life experiences. "There's no other way of saying it," she says. "I listen to the music and I surprise myself. I'm like, 'Damn girl, you're doing this damn thing.'"

While creating Taste Test, Priyanka envisioned her own world where she's, obviously, the main character. She explains the character as a hero who can be summed up as The Hunger Games, meets Beyoncé, meets The Purge, meets dance-pop icon. In this alternate reality, she's running away from a social injustice nation that's attempting to manipulate and control its people — something Priyanka likens to mainstream media and toxic people in her life.

In May, Priyanka released "Cake" as the first song and music video off of the EP. It's a song that screams confidence and begs to be blasted at the club. "Whenever you date somebody, they make you feel like you're on top of the world and you're so beautiful, you're so sexy and so sought-after," Priyanka says of the track. "And then for some reason, that same person also makes you feel like a pile of garbage ... but then you have those waves of confidence where you're like, 'You know what? No, I am good.'"

That confidence rings throughout each of Taste Test's five tracks, and the EP features other drag queens who build on that message. On one song, Priyanka teams up with Canada's Drag Race sister Lemon to diss a guy they've both encountered. At one point in her life, Priyanka was dating a guy who, right before getting serious with her, tried to date Lemon. "I didn't know until I was in the thick of it," Priyanka says, adding that the song is also about general fuckboys, bad texters and playboys.

Another song on Taste Test features RuPaul's Drag Race UK Season One queen Cheryl Hole. That track is reminiscent of girl groups — something both of the queens love — and was recorded over a video call. At one point in recording the song, Cheryl Hole was rapping her verse over Zoom while Priyanka was traveling in a car to a show within her home province.

That just hints at Priyanka's work ethic. When she started performing in drag in 2017, there were often days where she'd finish working her day job hosting Canadian children's TV and prepare to perform in drag at a bar that same night. "I was really putting in the work and people saw that," she says. "And people love that, and people were a part of that. My perspective right now is that it's just like the true testament: the harder you work, you could literally do anything — like anything in the world."

Even while creating Taste Test, Priyanka had to work harder to complete the project. She sat through numerous meetings trying to secure funding and pitch her ideas, only to often end up with rejections and apprehension. For instance, booking the Casa Loma — a historic mansion and museum in Toronto — for the "Cake" music video proved to be difficult. But she was inspired and driven to get her foot in the door as a person of colour.

"I fought for it because I wanted people to see that a POC drag queen — for her first single off of her debut album — can look as good as a Britney Spears video or Christina Aguilera video or whoever's video," she says. "It's all about putting ourselves in those slots where we usually see white people and showing people like us that they can do it, too."

On top of hard work, Priyanka's passion for iconic performers and pop music helps drive her drag career. "I truly am a pop music lover," she says after recalling how she'd go into her parents' basement and listen to her father's massive vinyl collection. She lists Celine Dion's "My Heart Will Go On," Destiny's Child's "No, No, No" and the Spice Girls' "Wannabe" as some of her favorites.

Priyanka's audiences are also contributors to her motivation. "Honestly, there's nothing like being on stage performing and watching an audience just walk away from their miseries and forget their stress," she says.

But despite Priyanka having performed in drag for a few years, having fans is still an unfamiliar phenomenon. "Like, what about me getting drunk off of tequila eating chicken fingers at a show made you say, 'international icon?'"

For that international icon, it's just the beginning. On top of diving deeper into her music career, she's an actor, dancer and model who's a "jack-of-all-trades" but a "master of all of them." In the future, she hopes to write books, star in major films, perform at stadiums and headline tours.

"Being named Canada's first-ever drag superstar, and I'll always be that — that's just in the history books now," she says. "That title changed a lot of people's views on me and really set the stance in the solidification of, 'She is an icon... she really fought for the crown.' It just excites me because the things that I did in my reign are the things that are going to create longevity in my career but also inspire the Season Two winner."

While she's sad to see her Canada's Drag Race reign come to an end, she's excited for a new set of queens and to welcome a new Canadian drag superstar.

"That's what it's all about. It's about family and it's about togetherness and being positive together and collaboration," she says. "As weird as it is to step down... I've always been that kind of girl to really be excited about new people. I'm excited because the bigger the cast gets, the more people there are to take over the world."