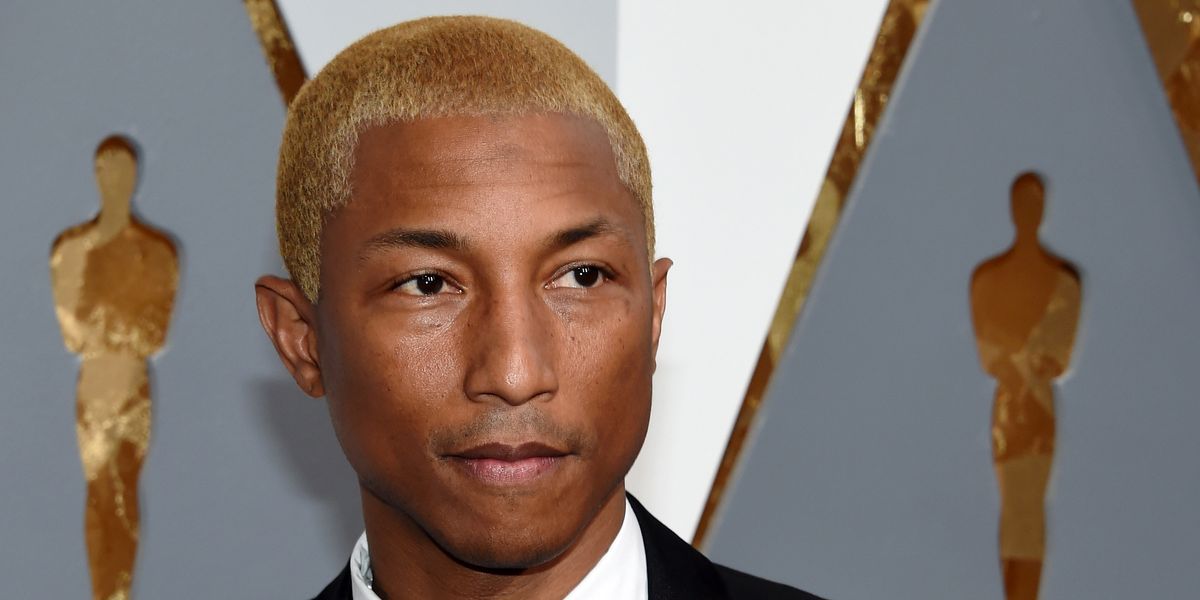 Ageless, shorts-loving production nymph Pharrell took the time in his new GQ profile to reflect on one of the more unfortunate parts of his legacy: "Blurred Lines."

If you recall, the 2013 collaboration with Robin Thicke and T.I. became an early lightening rod in the last half decade's conversation about the normalization of sexual violence and predatory male behavior that's led us all the way to Me Too.

Related | Pharrell Walked as a Pharoah For Chanel

Perhaps if the song weren't literally titled "Blurred Lines," the act of Thicke whispering "you know you want it" over and over again wouldn't have felt so gross.

Another lyric shows Thicke jumping to conclusions about her desires: "The way you grab it/ Must wanna get nasty."

Or, maybe the song of summer '13 would have been spared cancellation if, in the music video, Thicke, Pharrell and T.I. hadn't stood there smug and fully clothed while three naked models (never forget the career-making moment for Emily Ratajkowski) pranced and flirted around them.

Revisiting the video isn't so fun for Pharrell.

"Some of my old songs, I would never write or sing today. I get embarrassed by some of that stuff. It just took a lot of time and growth to get to that place... I think 'Blurred Lines' opened me up," he told GQ.

Pharrell says he didn't "get it" at first, because some women liked the song.

GQ on Instagram: “@Pharrell covers GQ's New Masculinity issue, an exploration of identity, culture, and style in 2019. Read the cover story and see all the…”

"...There were older white women who, when that song came on, they would behave in some of the most surprising ways ever... So when there started to be an issue with it, lyrically, I was like, What are you talking about? There are women who really like the song and connect to the energy that just gets you up. And I know you want it — women sing those kinds of lyrics all the time. So it's like, What's rapey about that?"

The discussion controversy made him aware of the subtly of misogyny, and his own blind spots as an artist.

"And then I realized that there are men who use that same language when taking advantage of a woman, and it doesn't matter that that's not my behavior. Or the way I think about things. It just matters how it affects women. And I was like, Got it. I get it. Cool. My mind opened up to what was actually being said in the song and how it could make someone feel. Even though it wasn't the majority, it didn't matter. I cared what they were feeling, too. I realized that we live in a chauvinist culture in our country. Hadn't realized that. Didn't realize that some of my songs catered to that. So that blew my mind."

I'd say our culture has grown fairly pessimistic about the efficacy of cancelling a dumb, gross pop song song, when there are men accused of assault in the White House and on the Supreme Court. But the conversation around "Blurred Lines" moved us forward, and it's affirming to hear Pharrell can acknowledge the flaws of the song, however comparatively banal (which is more than Thick has done).

Pharrell's cover story is for GQ's "New Masculinity" issue. His accountability is an crucial aspect of the changing notion of masculinity, given no one is born a feminist or an ally.