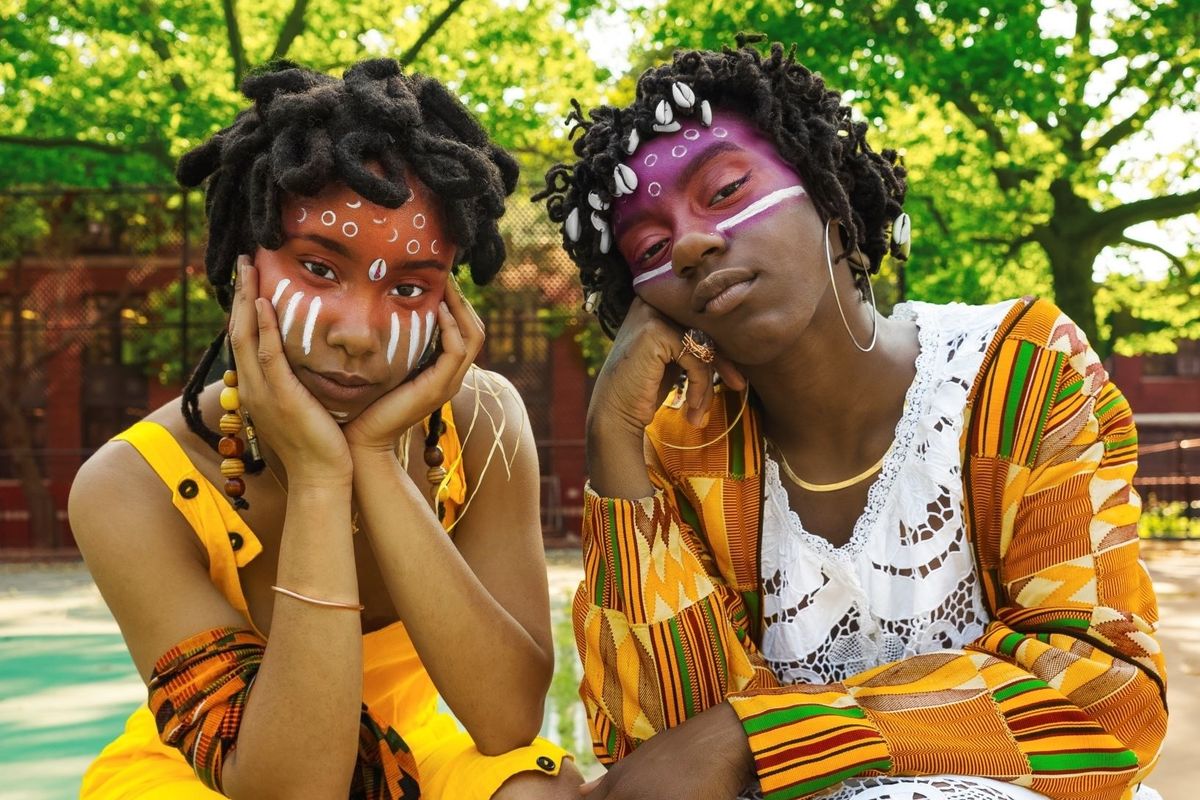 The first thing you need to know about neo-soul and hip-hop duo, OSHUN, is that their namesake is derived from the name of a West African mythological deity of fresh water, pleasure, sexuality, fertility, beauty and love derived from the Yoruba religion. After a chance meeting while both members of the duo were attending NYU, Thandiwe, a journalism and Africana Studies major, and Niambi Sala, a student at the Clive Davis Institute of Recorded Music, felt moved to by ancient goddess' energy and decided to dedicate their collective musical project to her and the ancestral magic from which they draw inspiration.

OSHUN approaches their music with a distinctly Afrofuturist perspective, combining elements of African culture with sci-fi tropes to create a completely unique dimension for their music to inhabit. Their debut album, bittersweet vol. 1, unfolds like it could be the soundtrack to some Black Panther spin-off set in space with the duo as kickass superheroes using their mystical powers to fight evil across the universe. The record bounces from bass-boosted battle cries to tender hymn-like ballads with Thandiwe and Niambi's siren-like vocals encircle one another.

Related | The Mythology of Rammellzee

OSHUN extend this world into their visuals as well under the umbrella of the "Oshuniverse." In the video for "We're Yung," the duo are transported from an MTA train into a field of sunflowers where a handsome, bare-chested love interest awaits. Glowing butterflies flit by as the duo croons over a guitar-driven dancehall beat. It's laid back summer soul, perfect for afternoons whiled away in a grassy field or nights connecting the stars.

PAPER caught up with OSHUN ahead of their appearance at Meow Wolf's Taos Vortex, taking place August 15-17, to try and get to know the mystical duo a little bit better.

What was it that initially inspired you about Yoruba culture?

We were both raised in Pan-African homes and grew up exposed to a lot of traditional African Spiritualities. When we were old enough to digest and grasp an understanding of Yoruba culture and the Orishas, we were inspired by the unapologetically African power, beauty, and healing capabilities that our ancestors and their spirits could provide.

For those not as familiar with Yoruba culture, could you maybe explain what its all about?

Yoruba culture is about destiny — manifesting your destiny through good character and balance. When you walk with good character as you navigate the world and balance the energies around you, you will attract health, wealth, positivity, and longevity.

How does that then translate over into your music?

What was the last mystical experience you had?

We woke up this morning, that was mystical AF. We crossed from the spirit realm to the physical. We were outside of our bodies lowkey, then we just hopped back in our bodies like, "Iight, so boom. It's a new day, let's get it." That is some real interdimensional, transcendent, mystical shit.

Our mothers, our fathers, our big sisters and brothers. Our teachers and our OG's. Osun, the Great Mother. Our ancestors. As artists, we look to pioneers like Missy Elliot, Busta Rhymes, Erykah Badu, Lauryn Hill, Outkast, Parliament Funk, Fela Kuti, Bob Marley.

What was the idea behind the video for "We're Yung?"

"We're Yung" is a continuum in the bittersweet OSHUN story, following us and a familiar love interest. We see Hallow Dreamz, who makes his first appearance in our "Parts" video, on the train. Once we've made eye contact, we take a journey through love, beginning on a NYC Subway and ending all the way in the Oshuniverse.

What was the most fun part about shooting the video?

The location (Donaldson Farms in NJ) was everything. Shooting the sunflower field shots (twice) on a farm with a poppin' farmers market was super clutch. That food was rocking.They had mad fresh fruit, cakes, even their water hit different. Plus the people working on the farm were so nice, they brought us fresh apples and refreshments on set. We took a hay ride to the sunflower field section of the farm, so the entire experience was basically a movie before we even shot anything.

What are your festival essentials?

Our festival essentials include water — coconut water, lemon water, rose water, hot water, running water (fingers crossed). Festivals are always hot and crowded, so staying hydrated is a must. Also, towels are needed for the same reason. We can't be out here hella sweaty. And if we're really prepared, we'll have kettle cooked chips, comfy shoes (that can get dirty), a sweater because it's always cold at some point, cash, and pre-rolled spliffs by Thandiwe.

What does the future hold for OSHUN?

Join OSHUN in Brooklyn on August 28th for The Pop Out, the "littest party in the galaxy." Co-hosted by Jasmine Nicole, featuring DJ's Khalil, Odalys, Proda, and JADALAREIGN.