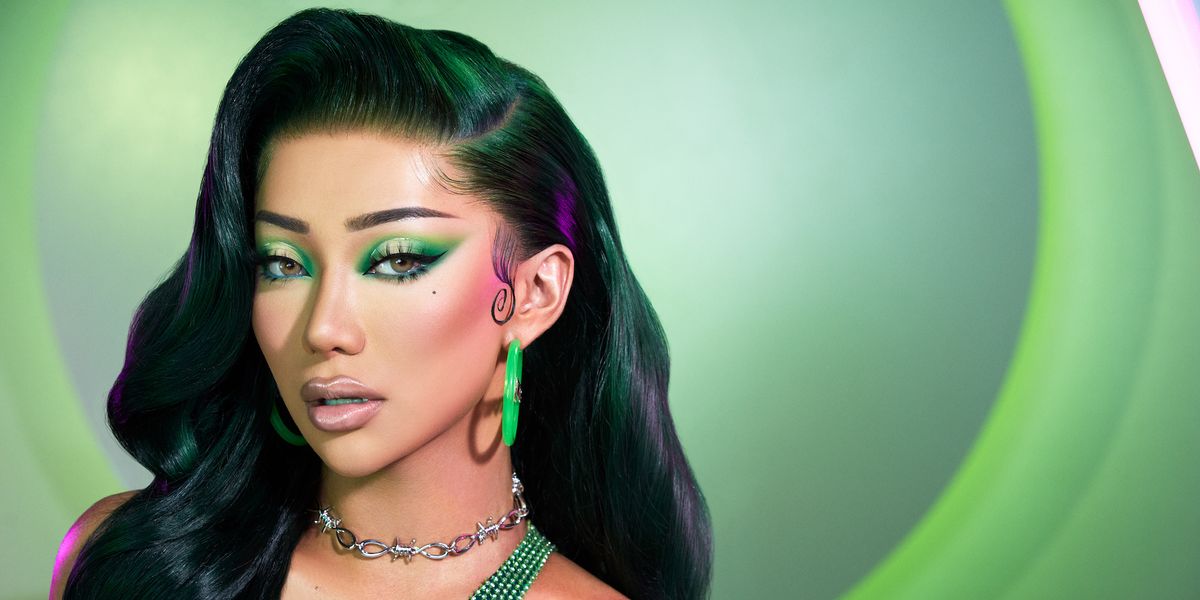 That's right, Morphe x Nikita is finally here. Just a year and a half after unveiling Dragun Beauty, her own vegan and cruelty-free makeup line, 24-year-old Nikita Dragun (known to her millions of supporters under the solo standing moniker of Nikita) has collaborated with a fellow beauty industry titan. The collab launches on Thursday, November 5, and Morphe will also start carrying select Dragun Beauty products.

No stranger to the world of influencing, Nikita first embarked on her beauty guru journey by uploading her first YouTube video back in 2013. Since then, the Belgium-born, Mexican and Vietnamese influencer has come out and lived proudly as a transgender woman, coined the term "P*ssy Stunt" (AKA one minute-long videos in which Nikita puts on her bad bitch face, a skin tight outfit that makes you question whether she's getting enough oxygen and heels taller than the Eiffel Tower as she makes any walkway her catwalk) and amassed millions of subscribers and followers across various platforms due to her flawless makeup artistry.

Nikita shares over Zoom call that while she was "fully prepared to be ass-chapped at Coachella, have Halloween, and then go into the Morphe launch," her life, like everyone else's, took a much needed pause due to the unfortunate evolution of the pandemic. But it soon picked right back as she stated that this year is the busiest she's ever been. Thankful that (so far), the internet is immune to COVID-19, she has been one of the lucky ones who can continue on working "normally."

Having adapted to the mask-wearing society, Dragun proudly admits that though she now puts more focus into making sure her eyebrows are snatched and not a single drop of eyeshadow goes rogue, she still continues to wear a full face of makeup. Because even though we can't see what's underneath the mask, she knows and loves a good lip look. With that being the case, a full face of makeup and a face mask do not necessarily live together in holy matrimony. While experimenting with ways to combat her makeup rubbing off onto her mask, she has gone through many a round of setting spray and powder — and even tried placing tissues behind her mask as a barrier. The least tedious solution has been opting for a skin-toned mask, so that when the foundation inevitably rubs off, you won't even be able to tell.

Deep in the process of putting together the Morphe x Nikita launch, mask face has been the least of her worries. During our chat, Dragun reveals that despite fielding many collab opportunities, she's particular about who she teams up with. Nikita's journey with Morphe began back when she modeled for one of the brand's lipstick collections. Being able to team up with Morphe felt like a "full-circle moment."

Their long standing relationship also provided the perfect space for Nikita to come in with a great deal of creative freedom. The culminating 35-shade palette can be honestly described as a true collaboration, with some key input from Lipsticknick, encompassing shared vision and strength without compromise on either end.

Related | Snitchery: The Girl Who Can Change Her Face

With the year paused, Dragun has been able to settle down and reflect on all that has happened since her career took off. When those who purchase a palette open it for the first time, they'll be met with shade names like Nicholas, Estrogen, 703, MTF (male-to-female) and others paying homage to "the different phases" of Nikita's life. Having grown up in the 703, or Northern Virginia, using the name Nicholas, Dragun wanted the palette to serve as a connection between herself and those who choose to dive into the fantasy as their brushes dip into the various shadows and become a gateway to whoever they wish to become that day.

Strong female characters have always served as a source of "inspiration to garner confidence" in Nikita's life, which is why names like Shego, Katana and Azula will also pop up in the palette. Amongst the 35 shades, Nikita's favorites are the first two "wedding row" shades and the center shade, "metamorphosis," that she describes as looking "like a portal" due to its marbled texture.

Her passion for makeup and wanting those who have a Morphe x Nikita palette in their possession to be able to "create any fantasy they want" comes from her own use of makeup as a tool for expression in a world where she did not have control over the body she was born in to and the way people perceived her. As a young child witnessing her mother and sisters "going into the bathroom one way and then coming out the most confident versions of themselves," Dragun noticed the power that makeup could have. In an even more personal sense, makeup supported Nikita along her trans journey as it allowed her "to become the woman she envisioned inside of [her] head."

Coupling her love for art with the shapeshifting power that comes from wielding a makeup brush, Dragun wanted to help pass that same "freedom" she has had along her journey as well.

With the palette also comes the release of a seven-brush collection. Denser brushes will help to place shadow, while "fluffy brushes will help to blend it out." With the two kits in hand, Dragun would go under oath to say that "if you go dropped off in the middle of nowhere on an island, you will be okay."