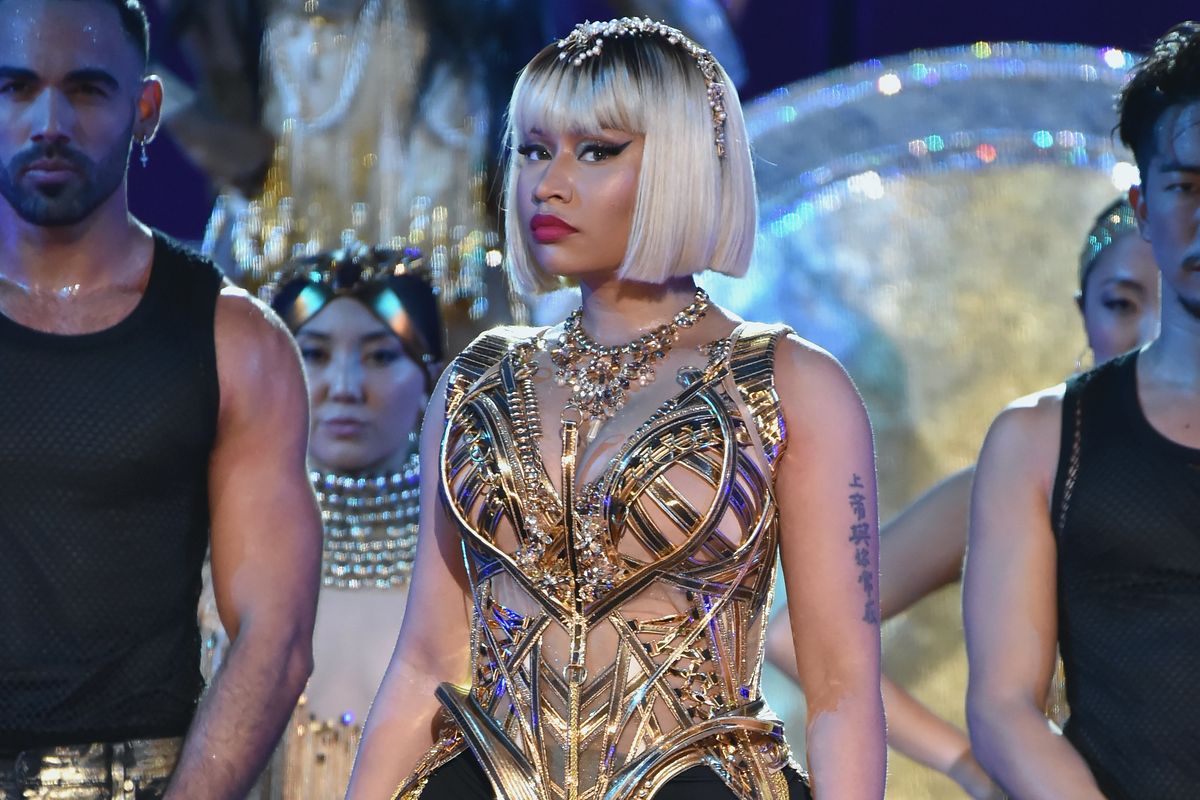 Nicki Minaj Is Self-Serving, But So Are Most People

The rollout of Nicki Minaj's fourth studio album, Queen, has been riddled with the kind of high drama usually reserved for telenovelas and outtakes from the Real Housewives franchise. Between ongoing feuds with writers and media, a minor Twitter dust-up with ex-boyfriend Safaree Samuels, and alleged conflicts with the streaming services tapped to support her release, it's difficult to tell whether Minaj was soothsaying an inconvenient reality or laying the ironic groundwork for the imposition of a villain narrative when she rapped, "They paintin' me out to be the bad guy," in "Chun-Li."

On the one hand, one could certainly argue that Minaj made some key missteps around the promotion and rollout of Queen — the biggest it would seem was making the assumption that merely being Nicki Minaj would be enough to topple the Kardashian-backed juggernaut that was Travis Scott's Astroworld. Minaj ultimately debuted at number two on Billboard's charts, just below Scott's third studio album. Where the rollout around Queen felt much more traditional, Scott's followed all of the standard procedures and then some, engaging the ephemeral interests of Gen Z audiences on their terms: '90s nostalgia, dedicated merchandise, exciting social stunts, polarizing controversy, and at one point Scott even gave away $100k on Cash App.

Fresh from Monday night's VMAs where she won the Best Hip-Hop award, Minaj hosted a fourth edition of Queen Radio. There she further clarified her thoughts on Scott, stating, "What we're not going to do is have that autotune man selling fucking sweaters telling you he sold half a million albums, because he fucking didn't. You stupid fuck. You got your fucking homeboy talking for you and you got your girlfriend selling tour passes. Stop it. Knock it the fuck off. When [Travis] comes along and sells a tour pass that has nothing to do with his fucking music and says he's sold more than Kanye West and Nas — no you fucking didn't, keep it the fuck real. I know I'm that bitch, I know I'm number one... Having said that, none of this is some serious anger shit. No — we are in a time right now where black music is prospering. And I am one of the people who, I'm so excited to see where rap has come from and where we are. But right is right and wrong is wrong."

Minaj also claimed her frustration had less to do with the numbers and more to do with unfair treatment from her label and streaming partners; in a series of tweets the rapper laid out why felt particularly strongly about Apple and Spotify.

Minaj's unwillingness to quietly accept second place may indeed have a whiff of hubris, but the idea that her outspokenness is invalid because it is self-serving in nature, or simply the result of being a sore loser completely ignores how her peers have used self-interest as a marketing tool without accruing nearly as much criticism.

In 2007, 50 Cent and Kanye West famously feuded over whether West's Graduation or 50's eponymous album Curtis would be more popular. 50 even promised to retire from rap if he did not outsell West — he lost by a landslide and did not stop rapping. In fact, 50 did just about everything but bow out gracefully when the final numbers emerged. In spite of that, and in spite of the fact the album could easily be considered a professional failure when considered against his far more popular efforts — The Massacre, Get Rich or Die Tryin' — critics tend to remember the moment as a highlight in rap beefs.

Minaj's choice of collaborators has also come under fire, specifically her single "FEFE" with Brooklyn rapper 69. Forbes even published a highly critical essay dismissing Queen before its arrival because of Minaj's perceived hypocrisy. Most will remember that 69 previously pled guilty to the use of a child in a sexual performance. The writer felt this in conjunction with Minaj's Elle feature, which walked back some of her views on female sexual autonomy (and subconsciously judged sex workers), was grounds for completely cancelling her. To be sure, Minaj should absolutely be challenged on these decisions, and how they are at odds with the brand she has attempted to create for herself. It should also be noted that Minaj was, and very rightfully should have been, challenged for her unprovoked attack on culture writer Wanna Thompson.

The men of rap are given the room to drape themselves in ego and aggression as if it's a birthright, and in many ways their maleness makes it so.

However, what's interesting about these scenarios is how Minaj's gender is central to what others define as acceptable and tolerable. Long before Minaj collaborated with 69, artists like J. Cole, Kendrick Lamar and Drake publicly supported the late XXXTentacion, whose violent abuse of women was chronic, well-documented and deeply troubling. Still, some of the very same platforms that have dissected Minaj's collaboration with 69 as reprehensible said nothing about the well-known artists that supported X behind the scenes and in very public-facing ways.

So why is it that when two men argue over album sales or who is fundamentally the better rapper, it's just hip-hop, yet when Minaj engages in the same battles she's simply a sore loser or has a bad attitude? She may in fact be a sore loser, but so are many of her male counterparts who have also ranted on social media or taken to the radio to air out their grievances. Who could forget Gucci Mane's 2013 Twitter rant in which he took aim at everyone from Minaj to his own girlfriend (and now wife)? Yet the men of rap are given the room to drape themselves in ego and aggression as if it's a birthright, and in many ways their maleness makes it so. The truth is, Nicki Minaj is just like them. She comes from the same school of thought — one that values hip-hop as a game of adversaries and a game of battles fought and won. Ultimately, she deserves the same room for hypocrisy and self-aggrandizement granted to her peers.