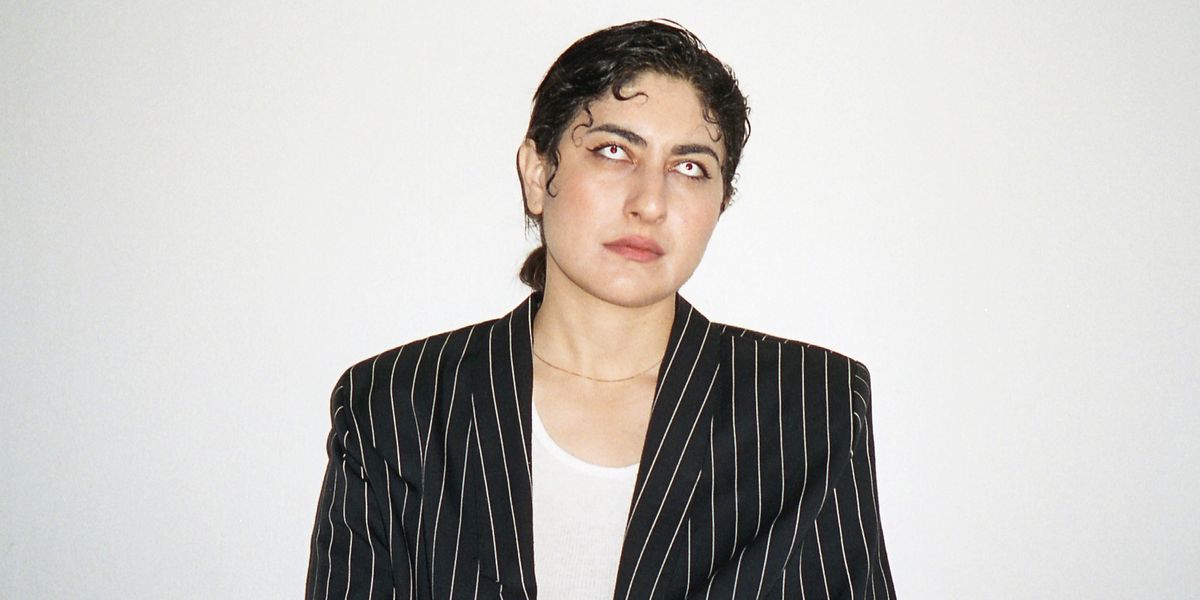 Having spent a decade as the front women for metal outfit King Woman, multi-talented NYC-based artist Kris Esfandiari is once again changing shapes with the launch of her latest solo endeavor, NGHTCRWLR.

A mixture of drone, harsh noise and industrial sounds, it's an entirely different beast from anything Esfandiari has ever released and a project that's been incubating for the better part of two years. The music has only been available to experience live when Esfandiari opened for Boy Harsher on their 2019 tour, but the time has finally come for NGHTCRWLR to see the light of day.

Related | Blanck Mass Isn't for the Faint of Heart

Esfandiari's debut album as NGHTCRWLR, Let the Children Scream, is a carnival of chaos. Riding on a wave of all-consuming noise that steadily falls into lock-step, its opening track "Bolt (RIP Miss Maryam 999)" sets the tone like a sinister omen before launching full throttle into the terrifying 808-stuffed title track. With a name like "Let the Children Scream" it's not like anyone expected puppies and cuddles, but Esfandiari's combination of screamo vocals with eerie found audio clips manages to bring the air of dread to surprising bone-chilling extremes.

Esfandiari finds new ways to unsettle with every turn, whether is be through screw-tightening sirens on the chorus of "Daymare" or the swirling reverb effects of "Shine!" that skitter like a nest of centipedes scattering. Feelings of paranoia and terror are pervasive throughout, but stop short of overwhelming its more danceable moments. Like a Santigold cover of Marilyn Manson, the fire and brimstone of Let the Children Scream momentarily clears for one of the album's more lucid moments on "Nation Under Creep" — counterbalance for the controlled cacophony that dominates the rest of the album.

Out January 29th via Amniote Editions, PAPER caught up with Esfandiari ahead of the premiere of Let the Children Scream to talk NGHTCRWLR, influences and Christian brainwashing videos.

How did this whole solo project come together?

I wanted to do something by myself for a while. I had this idea brewing for a couple of years, and then I saw Yves Tumor play live at a festival we were doing together in North Carolina. It was when they were still doing their solo thing, which was more noisy and it blew me away. I started getting a lot of ideas for the record and it was time to just go for it... start writing and recording. I have been working on it for almost two years now, and it's taken a long time putting everything together and working on it with people.

I don't want to talk about what the album is about, because I want to leave that up to the listener. It's deeply personal and I was a little nervous to do interviews about it because there are some things I don't really want to say about it. The topic is a little bit heavy, but if you listen to the songs you can pick up on what's going on. It's something you have to experience yourself.

What was the process of making the album like then?

I basically left my home in LA and relocated back to NY, which is where I was originally living. During that time a lot of crazy shit was going on while I was working on the record, including my grandparents' house burning down, which was where I was going to live before this. That, on top of the dynamic of working with a group of people, getting everything together and feeling like it was trying to capture a certain feeling to articulate something. It took a long time and a lot of patience to get the emotional feeling right.

What ultimately helped you get over that creative hurdle?

I originally started working with my friend, Seth Ponzo, who is a new producer, as well as Messyah and Isiah Trujillo. I showed him the songs and I was like, "I need help finishing this record, I am hitting a wall." The process was frustrating and took almost two years to finish. I felt like the sounds and feelings I was looking for were hidden, and it took me a lot of time to make it feel the way I wanted it to. I had to be really patient, which was hard for me. I did a whole US tour with Boy Harsher and had absolutely no music online. It will be nice to start performing, doing release shows and have music out so people can listen back to.

You cover "Firestarter" on this album. What's your relationship to The Prodigy?

That was another big influence on the sound of the record. The Fat of the Land is one of my favorites. I had finished the cover and was going to put it on the record and then Keith Flint died on my birthday. I didn't want to put it out after that because I didn't want people to think I was [capitalizing on his death]. I had the cover before that, I just hadn't put out the record. I was really sad because he was a big inspiration for me and their music is definitely the biggest influence on this project. I put it into a Dropbox link to announce the record a couple days ago with a password and let people download it because I didn't want to put it on the actual record.

Who were some other artists that influenced the record?

I like Yves Tumor's live performances back when they were doing their solo thing. I got to do festivals with them and it was one of the most incredible performances I've ever seen. Another would be Dean Blunt. It's funny because my very good friend Matt [Baquet] runs a festival in Tuscon Arizona called HOCO Fest. It's the sickest fest ever. He had him play and I was like, "I want to play that festival." I had just started working on the NGHTCRWLR stuff and whipped up a live set last minute because I really wanted to play. I actually got to connect with Dean and chill with him. He was so fucking amazing and his performance was legendary. I would say The Prodigy and Dean Blunt were big influences... just weird shit from my childhood. When I perform live I have these projections behind me of creepy Christian brainwashing videos that I had to watch as a kid.

It's strange. One day I remembered some of the names of things I had to watch and started YouTubing them. One of the things I had to watch was this creepy ventriloquist guy and then I read this article about how he'd been conspiring with some police officer to kill and eat children. It was so fucking dark and I went down this rabbit hole of watching these old videos. One was called Psalty the Singing Song Book, and it was this dude painted bright blue with blue spandex with a giant bible and he would sing these songs. He looked like a scary clown. I put some of clips from those in the record.

It was interesting. My parents are both immigrants: my dad's from Iran and my mom's from Serbia. I guess you could say they were both into the Occult at one point and then they both had their "Come to Jesus" moment. My mom and dad had some crazy supernatural experience, and they became Charismatic Christians. They were very die hard about it, and had a home church. I used to be very resentful [of how I grew up] when I was going through my healing process. The way that things were growing up, how freaky it was and just bizarre experiences and things I was exposed to. But now it's just comical to me. I think [my parents] just wanted to raise us with certain moral standards and protect us. They did their best, but some of those things are definitely scarring.

In light of recent US violence against Iran, it feels fair to ask if things have changed for you as an artist of Iranian descent?

It's pretty scary. I just got back from Berlin, where they were detaining US-Iranian citizens. They were ordered to detain them, illegally. Some of them were being detained, from what I read, for like 11 hours. I've never been to Iran, but I was honestly scared coming back over. One of my projects is called King Woman, and I have this jacket that my friend Suzie made which says King Woman in Farsi. I usually wear it when I travel, but I didn't wear it because I was scared I was going to get profiled. I feel like I ended up dressing a certain way to avoid that. I was tired after my flight... it's exhausting coming through JFK and dealing with all of that. I usually get hassled and have to talk to somebody when I come back over. My dad has experienced some aggression for the way he looks. I was checking in on my other friends to see if they were okay and if anyone was messing with them at the airport. I'm about to do a lot of traveling and the level of anxiety I was experiencing was through the roof.