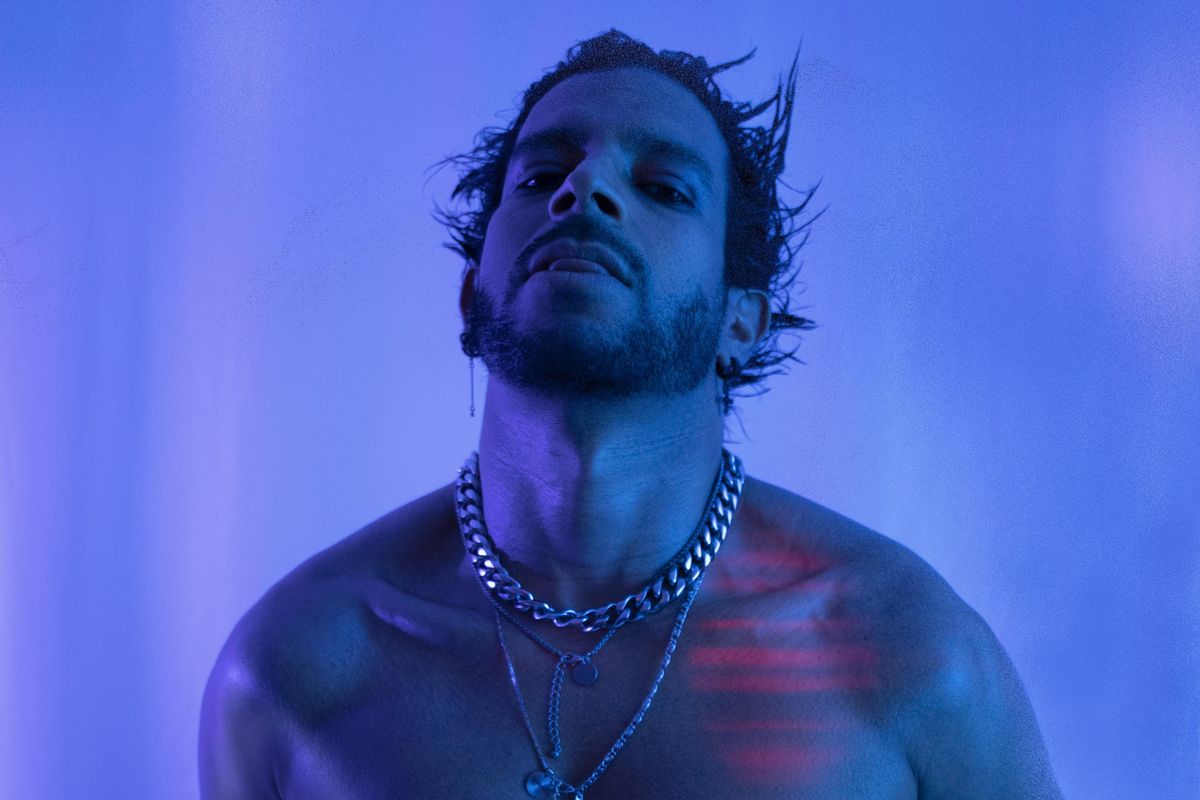 At a time when our collective consideration for the future has never been more important, independent artist NEO 10Y (real name Nik Thakkar) is offering up their own "Shortcut to World Peace." Their new album of the same name, available on all streaming platforms and in physical format, features 11 tracks that "help us manifest freedom, peace and the future that we deserve," according to NEO 10Y, whose genre-bending music fuses an ancient understanding with forward-facing updates.

Related | NEO 10Y Is Not Afraid to Check the Patriarchy

At its core, Shortcut to World Peace promotes love (or "love energy") — a seemingly simple effort, but complex in NEO 10Y's consideration toward understanding our individual pursuits to find it or feel it. "It can take a lot of time, research and invested shadow work to go through the various processes of understanding what 'love' really means," they say. "So I made these songs over the last three years to help amplify and speed up that process."

NEO 10Y's medium for messaging is, of course, pop music, "So it's something to enjoy, channel universal energy with and cerebrally advance us as a species." The tracks off Shortcut to World Peace are both ethereal and emotional, produced "with the intention to heal." Their past helped inform this body of work, namely "ancestral Indian/ Vedic philosophies of peace," as well as their upbringing in London. This balance has provided NEO 10Y with "a unique perspective on decoding violence and the binaries of reality," which they've used to write songs about self-love, manifestation and more.

On Shortcut to World Peace, "You will start to notice the frequency of synchronicities within the NEO 10Y universe, my name being one of them, which really shows that the intention of this project from the universe is way bigger than me," NEO 10Y says. "And being an independent artist has allowed me to execute this record and visual hyperreality in the most authentic way possible."

Below, NEO 10Y outlines their Shortcut to World Peace, track by track.

Opening with an "aum" (AKA the vibration of the universe), I wrote and performed "Shortcut to World Peace" on the piano with a very clear intention to frame this body of work. The lyrics and delivery begin pretty intimately with "my best friend is a porn star," and then the track evolves into an electric stadium-filling anthem with a powerful middle-8 decoding the literal solution to world peace through love and oneness. The song was produced with S.B.O, who is my talented Buddhist friend and long time collaborator, and we switch it up once again for the outro, which is sexy, loud and arpeggiated, opening up the record to the rest of the songs which traverse the binaries of reality.

Once we start synching up more with the universe, we start to realize that everything is being recorded and documented celestially. "The Camera (Clone Me)" came about from the realization that when someone pulls out a camera, we tend to be on our best behavior, playing the good citizen. The idea is to amplify that concept into every moment of our lives. The universe is documenting everything and "the camera's always on you." The track is electronic, sexy but fast-paced and tongue-in-cheek, and has a pretty epic rap verse and trippy middle-8.

As my most streamed song on digital streaming platforms, "Dopamine" is a fan favorite. It has a subversive and luscious guitar-driven production with Sebastian Bartz, and is about connecting with ourselves and cerebral happiness. From the perspective of world peace, the bridge of the song explains, "I am full of hope and all I'm longing for is peace/ So please give me that my friend." It's the idea of finding peace within oneself, so that we can find peace together. References to technology within the track are for "body technology," (i.e yoga/ kundalini/ kung fu) which are all ways to raise your frequency and love energy within our vessels. The track is 3:33 in length, so that's why it is the third track on the record.

Honing directly into the frequency of love, "ILY" is my most ancestral song sonically, with beautiful sitar from Tommy Khosla and tabla production from Teddy Jackson. I originally wrote "ILY" on the piano with the intention of us better understanding the cosmic shift that is taking place into a higher dimension, and acknowledging post-materialism as a key factor as we move forward. "Don't take it back to midnight" is to encourage us not to regress, and the outro references honesty with oneself and the collective, how God AKA The Universe flows through all of us and how we are one.

As a Cancer Moon, I am really connected to lunar cycles and always felt that the word "Lunatic" had a bad reputation and negative connotations, so wanted to reclaim it with the chorus, "Oh, I think about the moon all the time/ And I can see the light in your eyes/ Yeah, I'm a lunatic, Imma, I'm a lunatic/ You'll find, I'm trippin through space and time/ And you know that world peace is a vibe." The super immersive production on this very ethereal and atmospheric track is thanks to Teddy Jackson. I am particularly fond of the spoken middle-8 and the overall juxtaposition of the sensual production with the concept of rebranding the word "Lunatic." A real love song for stans of the moon.

Taking us into a more grunge-rock curiosity zone, "Reality Check" is a conversation between us and the universe/ our higher selves and also the patriarchy. It is also a "pay me" anthem. I wanted to write a money manifestation song for us all, so that we can all live in peace on this planet. It would be great if in the future we can collectively provide for every humxn that needs base level support. PAPER also premiered the video for "Reality Check." It's track 6 on the record because in numerology 6 and 666 are heavily associated with money.

Building on the concept of curiosity as a solution based way to navigate reality, "Y" was released last year to a lot of industry and playlist acclaim, including being COLORS song of the day. It's an ethereal curiosity banger to help us ask the right questions to navigate reality, manifest freedom, open our third eyes and decode the system. For the video, it was shot last year in that part of lockdown when we couldn't work at all. It is the 10th episode in my hyperreality music video series and features all original footage, but revisits characters and references from each of the nine previous videos to this, including my semi-viral Trump film.

Produced by the insanely talented 327 (fka hiide), "Feedback Loop" is a super connected plea to the universe to save us with love, truth and good vibrations. It was released on 11/11 and taps into my personal humxn design where key themes are frustration (unsurprising considering my purpose) and being a manifesting generator. It also documents my spiritual awakening and DNA shift from shifting to non-violent consumption. The electronic, future-bass driven production flows super well with the message of breaking away from bad habits in order to be more at one with the universe. From a numerology perspective, a feedback loop is infinity, so it had to be track 8 on the record.

The spoken world opening of "Unrelatable Autosexual" actually uses lawyers' statements from early 2019 when someone literally tried to sue me for being too sexy, so obviously I had to find a way to incorporate this into a song. "Unrelatable" is a heavy yet ethereal grunge-trap number which is 3:33 in length, hence being track number 9. On the surface, it's moody and tongue in cheek, but on a deeper listen, it's an uber-amplified self-love song with the intention of raising the collective vibration. It also references plant medicine "420" in the middle-8, which I am very passionate about for healing our community. At the core, the message is oneness amped up — for world peace. I am obsessed with the guitar on this track by Sebastian Bartz and the visual is a sexy, astral trip.

One of my best-known and critically revered tracks is "Stan Yourself" (produced with S.B.O), which had to be in at number 10 on the CD. The intention of the song is to take us from dystopia to utopia. It's a conceptual reference in a post-internet era reclaiming "stan" with a positive meaning. We spend so much time idolizing other people; if only we focused that energy on ourselves, we'd be in a better state collectively. I wrote it because I am always thinking about how we can optimize ourselves as a species, and I think it's part of my process and purpose as an artist to be questioning reality and reconstructing that which doesn't serve us anymore. I appreciate the idea of loving yourself to death, and embracing the entire path that the universe has to offer us. Once we stop fearing death, I think the journey is more enjoyable. The video is partly shot between London and LA and features the stan wall that I built that summer, which is also in the single art.

The angel numbered finale to the record that we deserve is one of my most lyrically cerebral tracks. I wrote "Crackhead Angel" on the guitar during our first lockdown, and it references a time as kid when I blacked out from cracking my head open and then another series of blackouts in 2016/ 2017. The song is about traversing the polarities and binaries of reality; decoding and embracing the ones and zeros and understanding of self. The process of self-realization has been heavily documented in this whole record and I wanted "Crackhead Angel" to be the finale as it leaves the record open to a new era with the final lyrics being, "Looks like we're gonna..." The video was also premiered by the legends at PAPER and the two characters in the film are versions of me, my "poles" per se, "Crackhead" and "Angel," breaking out of the prison of their mind to reconnect with the Universe.