Mykki Blanco is shopping through Ikea with his boyfriend when he receives a text. "Hi Mykki, this is M. I would like to talk to you. Is today a good time?" It's Madonna. He quickly responds, asking for 15 minutes — long enough to mentally prep for a conversation with the Queen, but short enough to keep the Queen from waiting. "So I'm literally hiding in a kitchenette display with the curtain closed and people walking by," Mykki remembers of his call. "She's exactly how you think she would be: extremely articulate, she uses big words, but not in a pseudo-intellectual way, she just talks like that." Madonna had received Mykki's contact from G.O.O.D. Music producer Mike Dean, a mutual friend, and checked out his work. "Being who you are and doing what you do in hip-hop, it must not be easy," Madonna says, ever the advocate for underdogs — and especially those in the LGBTQ+ community.

After navigating hip-hop in the early 2010's — including the limiting "gay rap" genre and relentless femmephobia — Mykki's underground profile became prominent enough to catch the attention of Kanye West, who invited him into the G.O.O.D. recording sessions that spawned Teyana Taylor's ballroom-infused "Work This Pussy (WTP)" in 2018. "In the beginning, it was really awkward because no one really knew where to place me," Mykki says, considering Madonna's statement. "But my career took off because social media enabled me to have a fanbase that was authentically mine. I didn't have to get a cosign from anyone because there were people on the internet listening to my music and watching my videos." Unlike Madonna, whose career rose in '80s New York, Mykki has thrived in the "digital diaspora," despite his identity. "Because of [the internet], I've been able to get my message out and stay true to what I believe in." Easily? No. Independently? Yes. 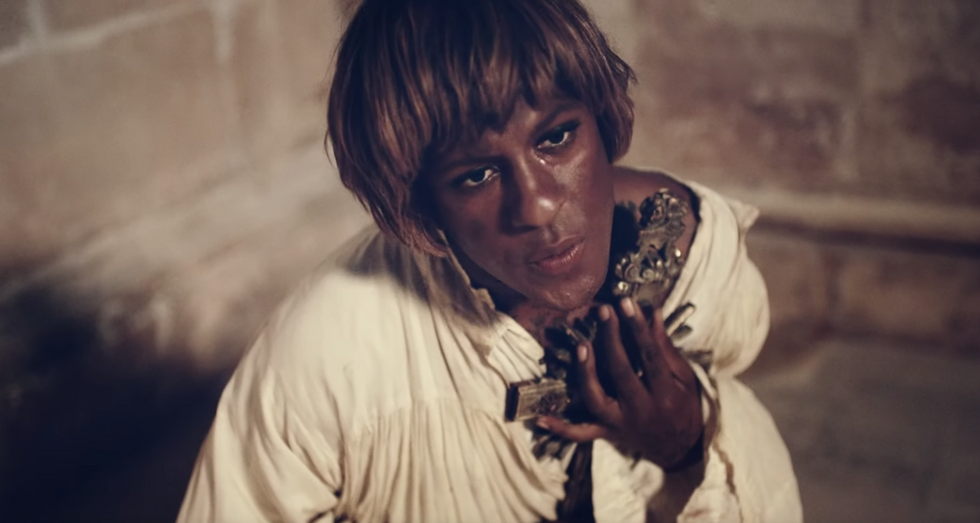 As surreal as it might be for Blanco to receive a call from Madonna, a global pop gatekeeper who eclipses generations, the match makes perfect sense. Madonna's career-long celebration of female sexuality continues to be subject to society's ageism and blatant distaste for women in control of their bodies. She's frequently, if not always somehow, defined by her age and gender — especially in mainstream media — yet actively creates work that transcends those limitations. Mykki, who's Black, queer, and HIV+, has been forced to embark on a career where those identifiers constantly supersede his art. "For the first few years, it was always 'Gay Rapper Mykki Blanco,' and then it shifted to, 'HIV+ Rapper Mykki Blanco,'" he says. "It's like, so you're not even going to talk about my work?" Mykki and Madonna have both been criticized, categorized, and censored — and being neighbors in Lisbon, Portugal, where they both relocated from the U.S., the duo's web of connections digs even deeper. "There are layers," Mykki says, laughing.

"About a week later, I fly to London and I'm invited to her home for our first meeting," Mykki says. Madonna played him songs off Madame X, her 14th studio album, out June 14, and the two "started vibing, not brainstorming — just vibing." After four and a half hours, Madonna had to end their meeting to study Kabbalah, but told Mykki she wanted to collaborate for the visuals on a track called "Dark Ballet" off the new LP. "She said she could see an allegory between some of the things I've experienced in my life and in this industry, and Joan of Arc." The peasant, who believed God had selected them to lead France to victory against England, has long been of interest to Madonna (2015's Rebel Heart even has a song titled "Joan of Arc," where Madonna draws parallels between her life as a celebrity to the French heroine). 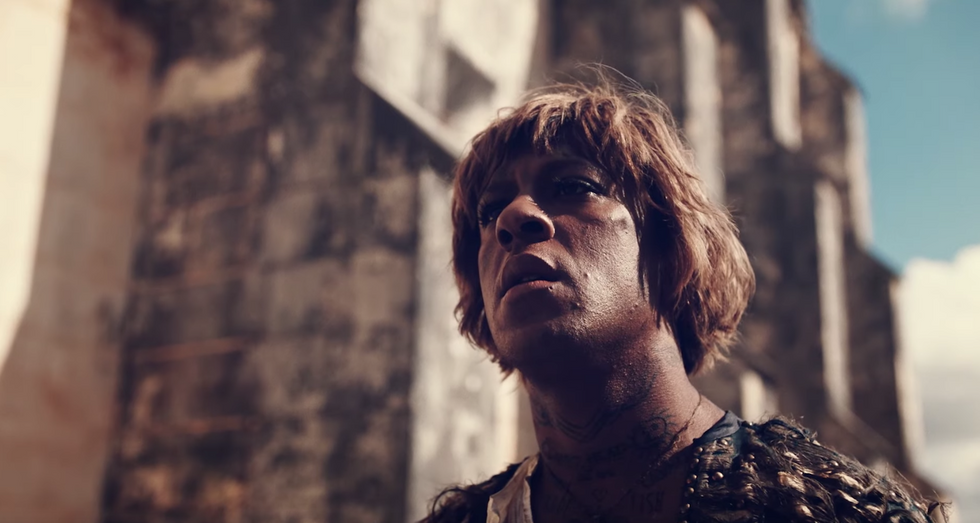 "I understood where Madonna was coming from," Mykki says of the comparison, recalling his 2015 announcement that he'd be quitting music to pursue journalism. "I made that declaration because I was in a pit of depression for not coming out openly as HIV+." Eventually, the rapper revealed his diagnosis on Facebook the same year he decided to stop making music. "I've been HIV Positive since 2011, my entire career," he wrote. "Fuck stigma and hiding in the dark, this is my real life. I'm healthy I've toured the world 3 times but ive been living in the dark, its time to actually be as punk as i say I am." The artist explored this in his Mykki single, "Hideaway," which examined the effect of HIV+ stigma on sexual and romantic relationships. 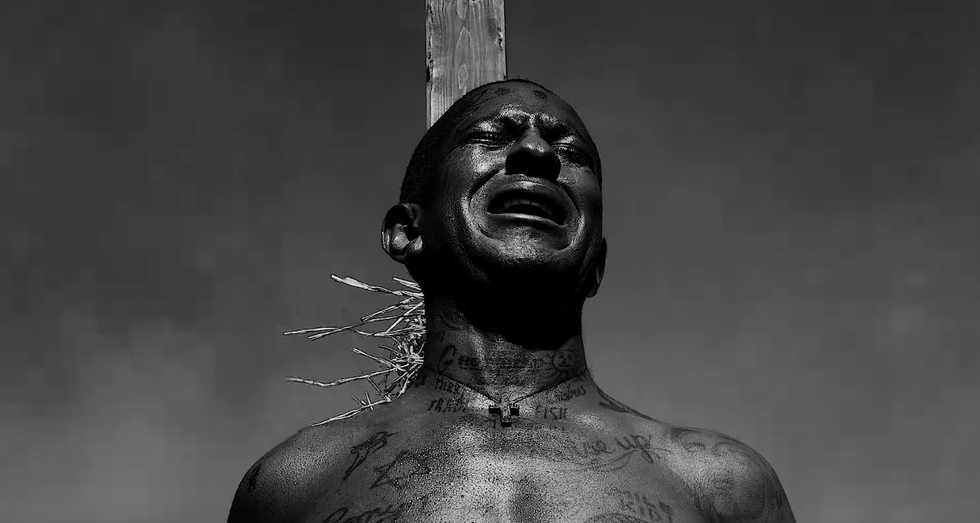 The number of celebrities who are openly HIV+ today is limited, and Mykki recalls feeling the isolation and fear of being a lone, public voice — someone who'd "burn at the stake" through rapid media consumption, mindless tokenization, and even further categorization than he'd already experienced in his career. "I remember the only other person that I knew that had come out as HIV+ was Magic Johnson, people that were so disconnected from my generation," Mykki says. "And then you had, what, Eazy-E? Who died, and I think people didn't even know until he was already in the hospital dead. So, I very much so could have also been ostracized had this been 20 years ago and I had come out about [being HIV+]."

"The only other person that I knew that had come out as HIV+ was Magic Johnson, people that were so disconnected from my generation."

In the "Dark Ballet" music video, directed by Emmanuel Adjei — the first Black director Mykki had ever worked with — Madonna opens the visual with a Joan of Arc quote: "...to sacrifice who you are and to live without belief, that is a fate more terrible than dying." Immediately, Mykki is shown in Joan's final moments on earth: enveloped in flames — weeping and sweating — before we're brought through the story of her demise. Playing Joan, Mykki sits alone in a jail cell and walks with hands tied alongside stone-faced, male religious leaders. "I can dress like a boy, I can dress like a girl," Madonna sings, as Mykki mouths. "Cause your world is such a shame." 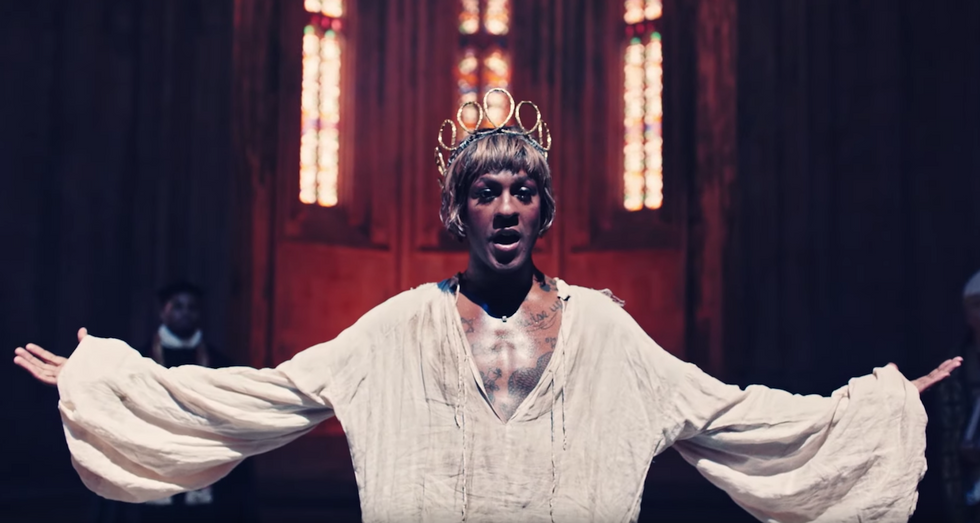 The triangle between Madonna, Mykki and Joan is overt, underlined when Mykki is dressed in a golden cone bra bodysuit that subtly pays homage to her iconic Blond Ambition tour costumes. Set to the tune of "Dance of the Reed Pipes" from Tchaikovksy's The Nutcracker, Mykki twirls wildly with a crown atop his head. "I will not denounce the things that I have said," Madonna sings, as Mykki taunts the surrounding priests — electric and smiling. "I am not afraid 'cause I have faith in me."

Embodying a gender nonconforming subject like Joan is something Mykki carefully considered, as someone who now identifies with he/him pronouns. But the rapper doesn't completely identify as cis, either: "I'm not a drag queen," Mykki says, addressing how men in women's clothing are often quickly labeled as such — especially considering the mainstream phenomenon of Drag Race. "While my narrative is true that when Mykki Blanco began, I was going to transition and didn't, I feel this idea that I'm a cis gay male really does make me uncomfortable and it makes me feel incorrect. At the same time, I feel like I shouldn't have to perform my gender to make myself seem more gender nonconforming just to appease someone's belief about me." Swinging between femininity and masculinity throughout "Dark Ballet," Mykki's take on Joan of Arc mirrors how his own everyday relishes the in-between. 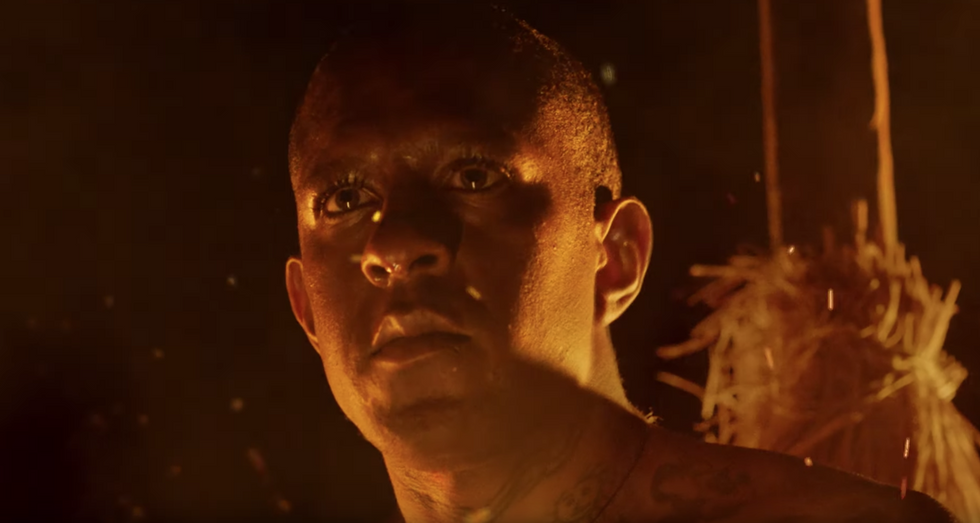 For an artist like Madonna whose work has heavily explored the images and voices of marginalized communities across decades, her absence from the "Dark Ballet" video is noteworthy. It even ends with a quote from Mykki: "I have walked this earth, Black, Queer and HIV positive, but no transgression against me has been as powerful as the hope I hold within." This support was not lost on Mykki, who says he's grown accustomed to industry peers only collaborating with equally mainstream artists. "People can say whatever the hell they want about Madonna, but she's done what I would think other artists who have a certain position who believe in me haven't in the past," Mykki says. "She's actually extended her hand and brought me to her level. And I genuinely don't believe there's some tinge of appropriation going on. She sees the need for women to have technical jobs on production sets; the director was a person of color. She's really one of the only pop icons we have."