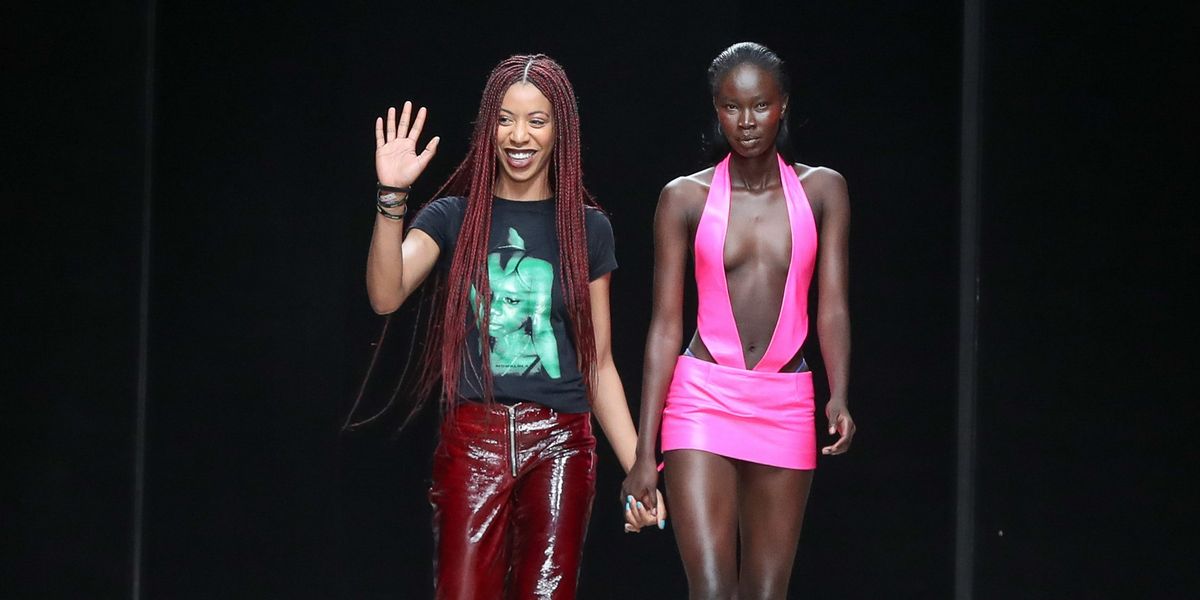 Everything You Need to Know About Mowalola

The news of the YZY Gap partnership announced earlier this summer was all anyone in fashion could talk about. The excitement escalated, however, when it was learned 25-year-old Lagos-born designer Mowalola Ogunlesi would be the design director of Kanye West's latest project. Given her new high-profile position, Ogunlesi's work is rapidly gaining traction on social media. But who is this young talent that has been entrusted with helping to oversee the design direction of the new Gap venture?

Born to two Nigerian fashion designers, Ogunlesi moved to the UK and attended a boarding school in Surrey when she was 12. The London-residing designer went on to complete a BA in Fashion Textiles at Central Saint Martins, which has birthed fashion legends such as Alexander McQueen, Stella McCartney and Riccardo Tisci.

During her studies she debuted a '70s Nigerian rock scene-inspired menswear collection entitled "Psychedelic," which showcased her now signature structured skin-exposing tops, straight-leg pants and bright leathers. While she stayed on at the institution with the intent to complete an MA, she swiftly dropped out of the program in pursuit of freedom and creative license to design in London. ("I do what I fucking want," she told The Peninsulist.)

Ogunlesi held her first show at London Fashion Week in 2019 with the support of design incubator Fashion East. After impressing front-row attendees Skepta and Kim Jones with the debut of her sex-charged and gender-fluid designs, she began to gain traction throughout the British fashion scene. Her accolades piled up after this as she threw herself into multiple projects such as a collab with Nike to design the Nigerian football team's uniform, working alongside Skepta on his "Pure Water" music video and being one of six designers picked by British Vogue to dress the 60th anniversary Barbie.

Her avant-garde looks and provocative posts have amassed an Instagram following of over 117k users, including Frank Ocean and Law Roach. Under her fitting social media alias, "DriP Gawd," Ogunlesi provides a raw and witty insight into the thought process behind her creations. Her tweets such as "How do you feel?" or "Outdated minds are a danger to the world" are a candid reflection on the thoughts and emotions that fuel her creative process.

"I also think just for your mental health, having to put so much of yourself into your work every six months is a lot," Ogunlesi told Kaleidoscope. "You need time to stop and think, 'Okay, what do I want to do next?' Otherwise, everything becomes work — even creating becomes work — and then it shows in the clothes." This confession of an embedded sense of self in her work gives a profound meaning to the eccentric colors and barely-there silhouettes displayed in her collections.

The conversations around the intentions behind her clothes have even found themselves in controversy. Naomi Campbell was once spotted sporting a halter neck dress from Mowalola's "Coming For Blood" collection — a striking white garment that features a contrasting deep red bullethole wound. Due to the nature of the event that Campbell was attending, a Fashion For Relief gala, the dress was viewed in bad taste as many interpreted it as a social comment of the political climate surrounding gun violence. Ogunlesi, however, took to her Instagram to set the record straight regarding the meaning of her dress by revealing that it actually signified "the horrific feeling of falling in love."

The supermodel is not the only well-known face to wear Mowalola's designs, however. Drake was also spotted donning a custom Mowalola leather jacket which depicted Halle Berry on its back, and influencers such as the Clermont Twins were dressed in skin-tight Mowalola for their Mont Boudoir collaboration. There's even an Instagram page @peoplewearingmowalola which acts as a shrine to all of the Mowalola outfits that have been worn by celebrities and fashionistas alike.

The upcoming collaboration with West, while a new revelation to most at the time of announcement, was foreshadowed by Kim Kardashian West a few weeks prior when she posted a picture alongside her husband dressed in an exquisite brown vinyl cutout two-piece designed by Mowalola. The designer has been outspoken about the roots of her inspiration, stating that it mostly stems from "music, film and people."

These multiple sources of creative inspiration are also evident in the ventures she has made outside of the fashion world. From releasing a short film "Silent Madness" in March to hosting events at the coveted music platform-turned-club Boiler Room, her creativity is seeping across a variety of fields and in turn forging her a multi-faceted career.

Ogunlesi, when talking to SSENSE, addressed the gender-fluid nature of her designs acknowledging that "gender constructs don't need to have certain wardrobe restrictions." It's a message made loud and clear from the rising star, who is part of the new wave of young British ethnic minorities changing and challenging societal boundaries in fashion including Grace Wales Bonner, Priya Ahluwalia and Bianca Saunders.