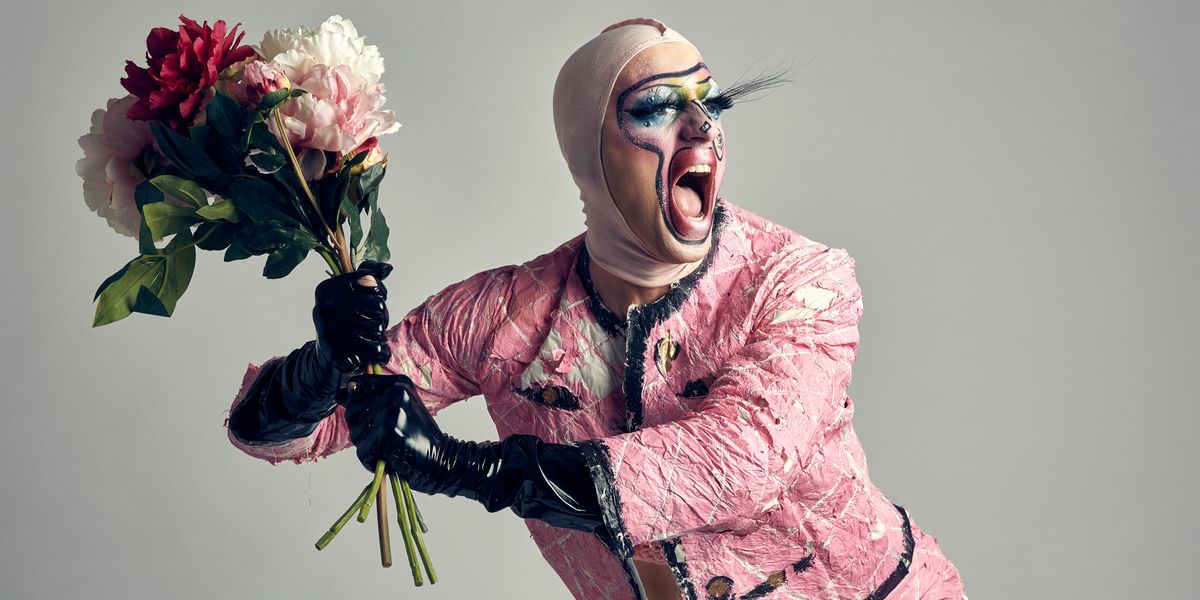 Milk Wants to Disrupt Your Thinking

Milk has always been something of a controversial figure among the queens of RuPaul's Drag Race, both because of her looks — which vacillate between drag queen, club kid and fashion twunk — and more recently because of her time on All Stars 3. But Milk has always relished pissing people off and making them think, trying to keep drag disruptive in the face of its growing popularity and adoption by mainstream culture. We talked to the self-described dairy queen sensation about All Stars, her club kid roots an the political power of drag's.

I promise this story won't be called "Milk Does a Body Good" or something similar.

Thank you for that promise. It's so funny the amount of people who come up to me like 'have you heard this one?" Only about 200 times. I love a pun but come on.

We're at peak saturation of drag, which means there now exists a standard of drag. Are you consciously trying to work outside of that?

That's always been what I've loved to do. I love to piss people off, make people question what they're seeing and how what I'm visually doing relates to being a drag queen. In a douche baggy sort of way, I really do like to make people think — either they think positively about it or they think negatively, and it lasts in their brain and causes a bit of disruption from their normal way of thinking, which is what drag was always about, or how it started: disrupting the idea of what gender could be.

"I love to piss people off, make people question what they're seeing and how what I'm visually doing relates to being a drag queen."

Do you think the young fanbase of Drag Race is missing out on the context of drag, which is based in queer nightlife, and getting a sanitized version of it?

It's fascinating, these kids that will sit outside and wait for us to get to a club that they are still seven years away from getting into. In a way, drag has lost a bit of its rebellious nature. Just getting in drag is still a political act, but it's much more accepted now. With acceptance comes this lack of grit and grime. Drag is a little bit cleaner than I enjoy it to be because of the young fandom.

In the face of the homogenization of drag, how do you keep your drag political?

When I first developed my fame from Drag Race, I didn't think it was right for a drag queen to take on any political issues because our role at that time was to be seen out in nightlife — and nightlife is the fantasy, we're supposed to be able to escape from reality. But the young fandom can't see us at a club, so it's important for them to see queens who really talk about aggressive issues, because our fans are the ones that are listening, that want to be educated. They're the ones that are going to vote. If we as queens can be any help in educating and making issues heard, that's so important.

"If we as queens can be any help in educating and making issues heard, that's so important."

What is the impact that club culture has had on your drag?

I started with Susanne Bartsch, at her parties, in Manhattan. I'd come from Boston and I was doing drag randomly in Boston every couple months, not perform, just to have fun with makeup and costumes. In Boston the aesthetic was very glam, very pageant, sequins and hair. I didn't see any grunge. When I moved to New York and started going to Susanne's parties, I was able to see such a diverse cast of characters, from beautiful queens and beautiful trans individuals to gross little club kids and everything in between. I realized I had the freedom to do whatever I want to do because in New York it was embraced and accepted.

How did you feel after All Stars 3 aired?

My portrayal on All Stars was really tough. It was a tough year for me because I knew leading up to it the way that they were leaning to portray me, so when season 10 came immediately after I was like, phew, the pressure's off. Some of these fans can be so in the moment, they hate someone one day and the next day they'll completely forget. I'd heard about people receiving negativity online and I was always an advocate against it, and when it happened to me it was like, Wow, this really does suck. Something truly needs to be done about educating this fandom. Just because you have an opinion doesn't mean you should share it.

"It's time for drag queens to come together and make ourselves heard."

You were very vocal on social media throughout All Stars about the online negativity in the Drag Race fandom. What can the fans do and queens alike do to start solving this problem?

A lot of fans of the show obviously realize the show is edited, but they will still fall back into this mindset that even though they know it's all cut together, they'll still believe it. [Fans need to realize] that this is a competition reality TV show meant to entertain, that the things happening on this reality TV show would not actually happen in reality. The things that queens say on the show, they say to their sister, because we've all worked together, we've helped each other out, we've cried on each other's shoulders, we've brushed each other's hair. Fans need to realize that it's just for entertainment and if it continues to be such a toxic social media environment, to send death threats, to call queens racial slurs, it's going to destroy this amazing phenomenon. It's time for drag queens to come together and make ourselves heard.