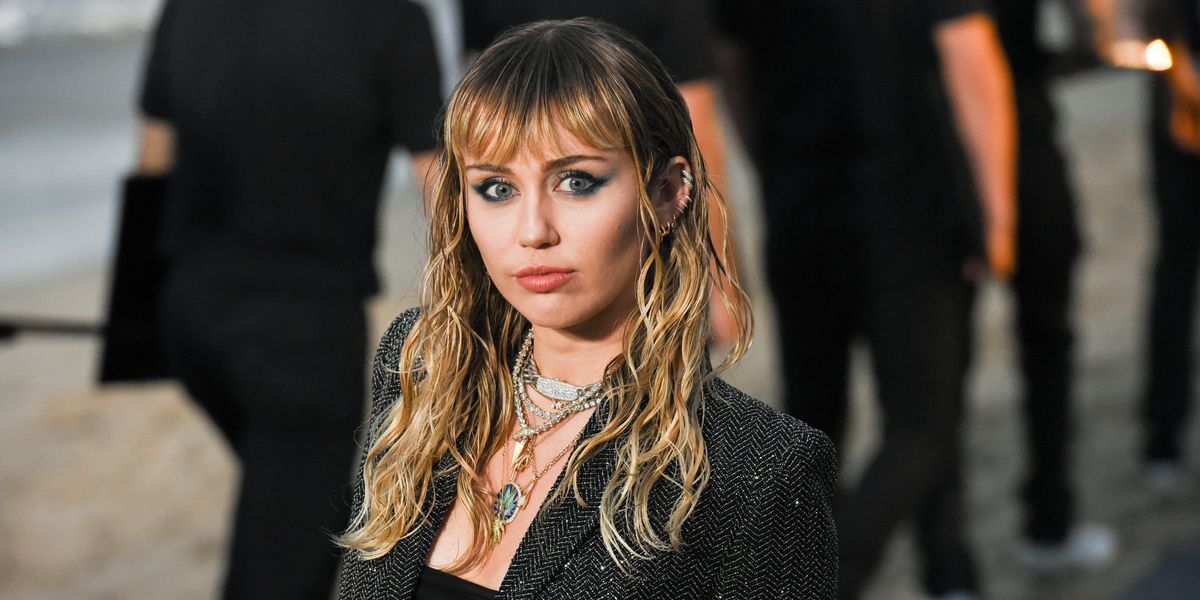 Miley Cyrus has once again addressed the infamous 2017 Billboard interview — in which she claimed that materialism and misogyny were what "pushed [her] out of the hip-hop scene." This time around, she's acknowledged why her words, and using Black culture as an album cycle, were so upsetting to fans and unforgivable to haters.

The pop star commented on a video titled "Miley Cyrus Is My Problematic Fav... Sorry" by YouTuber Kenya Wilson, who runs the account "As Told By Kenya." In the post, Wilson argues that Miley "liberated all the little Disney pop stars" to experiment with sexuality and bring hip-hop sounds and aesthetics into pop. "Ariana Grande does not make the albums she's making now, the 'Thank U, Next's' where she's sexually explicit, provocative, without Miley Cyrus making Bangerz. Taylor Swift doesn't... make the Reputation album" she says.

The vlogger acknowledges Miley "did some very racially insensitive things as far as cultural appropriation" and says the Billboard interview "wasn't okay," but passionately maintains that Miley "took all that heat, so you guys can do it freely and no one says anything. No one says anything when Ariana Grande does a '7 Rings.'"

Wilson's case for Bangerz moved Miley to leave this comment on the video, thanking the YouTuber.

For the first time, Miley acknowledged that "it is a privilege to have the ability to dip in and out of 'the scene'" and says simply "i fucked up and I sincerely apologize."

As a refresher, the Billboard story (which shot her in a pink prairie dress, frolicking in a meadow) heralded her return to sweetheartdom on Malibu. Explaining the transition, she told Billboard: "I love that new Kendrick [Lamar] song ["Humble"]: 'Show me somethin' natural like ass with some stretch marks.' I love that because it's not "Come sit on my dick, suck on my cock." I can't listen to that anymore. That's what pushed me out of the hip-hop scene a little. It was too much 'Lamborghini, got my Rolex, got a girl on my cock' — I am so not that."

In the immediate aftermath of the controversy, facing claims that she was insulting the culture she'd profited off and playing into insidious stereotypes, Miley wrote in a now-deleted Instagram post, via Rolling Stone:

"When articles are read it isn't always considered that for hours I've spoken with a journalist about my life, where my heart is, my perspective at that time, and the next step in my career. Unfortunately only a portion of that interview makes it to print, & a lot of the time publications like to focus on the most sensationalized part of the conversation. So, to be clear I respect ALL artists who speak their truth and appreciate ALL genres of music. I have always and will continue to love and celebrate hip-hop as I've collaborated with some of the very best. At this point in my life I am expanding personally/musically and gravitating more towards uplifting, conscious rap! As I get older I understand the effect music has on the world & seeing where we are today I feel the younger generation needs to hear positive powerful lyrics!"

For those who found Miley's initial response lacking in self-reflection, her new statement will at very least, be reassuring that the pop star's spent time thinking about her relationship to hip-hop.