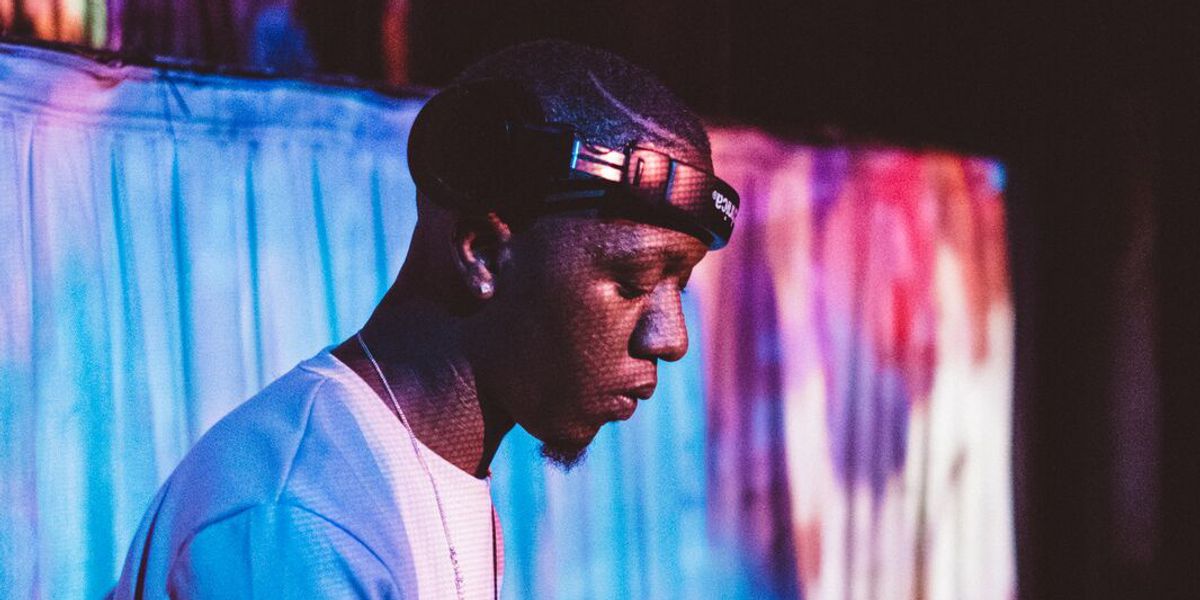 According to MikeQ, a New Jersey-based DJ, producer, and the labelhead behind Qween Beat Records, ballroom culture in New York has been slowly dying out. What once was a flourishing scene emerging from the city's underprivileged Black and Latino queer underbelly is now dwindling down to virtually nothing. In fact, other than Vogue Knights, the long-running Monday night extravaganza that has gone through more venue changes than Lady Gaga has gone through wigs, there are no standing club nights reserved for ballroom and vogue.

Luckily, House of Yes is here to change that. For the past three months, the popular Bushwick, Brooklyn venue has played host to "House of Vogue," a monthly series dedicated to spotlighting ballroom culture and all its beautiful intricacies. Organized collectively by Meanred Productions and MikeQ himself, House of Vogue has managed to bring a traditional Ball to a nontraditional venue filled with people that otherwise may have never had the experience. Each House of Vogue night features vogueing (naturally), music courtesy of the members of MikeQ's own Qween Beat Records, trained MCs, special guest performances, and even competitions with cash prizes.

As Meanred Productions and House of Yes prepare for their fourth installment of the series happening tomorrow night (tickets available here), PAPER hopped on the phone with organizer MikeQ to talk about how the event came to be, why ballroom culture seems to be quickly disappearing, and what it means to bring an inherently underground scene to the mainstream masses.

How did you first get involved with House of Vogue?

Initially, I was approached by Meanred [Productions] to do a monthly event at House of Yes. I never really wanted to do events or parties, just because I know how they can sometimes feel. Being a DJ for the past thirteen years, I've been to multiple parties and have had different experiences with them—so I've never wanted to do one. But I was approached by Meanred to do this event and, immediately, I thought to do a ballroom night and to include the members of my record label Qween Beat. There are 19 of us, so I kind of wanted to use [this] new space just for us to display our talents, and also include ballroom as well.

We're about to do our fourth [House of Vogue event] now, so it's been going better than expected. It's a really exciting thing. I've heard a lot of people say that it's refreshing to come to [this particular] ballroom [event] because a lot of the [other] balls have a lot of politics and shade. Of course, shade is the basis for a lot of things in ballroom, but sometimes there can be a lot of negativity. Coming there [to House of Yes for House of Vogue], it's nonexistent for that kind of stuff and it's just fun for everybody.

Why do you think the shade and politics are nonexistent at House of Vogue?

I think it's definitely the people. It's a very mixed crowd. We get the ballroom crowd, plus a lot of walk-ins of all races and all genders. I also think that me being in control of it also helps; I just don't dip and dabble in that kind of stuff. I don't know. It's just something new, something different. The panel of judges that I choose aren't people that are super shady—they're fair in their judging. That does help with it a lot.

What makes House of Vogue special?

Well, it's definitely the only ballroom event going on in Brooklyn and one of the few [currently happening] in New York anyway. Other than that, there's Vogue Knights that I do on Mondays where I'm just a DJ. (That's like the main weekly function that everyone goes to when it is happening.) But the issue with that right now, is that it's really hard to get a venue or nice space for that. It started off at [gay nightclub] Escuelita, which got sold and closed down. Then it moved to XL and the same thing happened there. Then it moved to another club, but then the guy that was funding these parties passed away. So from there, we just lost a lot of links to bigger clubs in Manhattan where it usually is. Right now, [Vogue Knights] is in a small restaurant in Manhattan—whereas House of Vogue is in an actual club with good sound. It has a nice aesthetic and vibe to it. I'm really happy to be able to provide that.

Do you think these venue closures are the result of deliberate efforts to kill ballroom culture?

I don't think it's a deliberate effort towards vogue culture to stop it from happening in New York. It's just, from what I've seen, underground, DIY-type parties in New York City, those places have gone away. But also, with ballroom, it does have a reputation at a lot of venues, so there are venues that just don't want that [kind of party happening] there. Sometimes the kids will go in and mess shit up—leaving glitter all over the bathrooms. At times, there are fights that break out, and those are big things. So a lot of venues don't want that type of event there anymore. And that windows into just disappearing in general.

What do you do to transform House of Yes in preparation for each House of Vogue night?

It's not much transforming that we do to the space besides setting up a judges' table. Like I, myself, will go out and buy a nice colored tablecloth for the judges' bags and stuff so it pops. That's kind of the only preparation I will do. The venue itself is so amazing and it already fits the look of things.

Does your judges' panel stay the same or does it change each week?

That changes. It will be people from Qween Beat on the panel or whoever may be in the building. Or sometimes, I'll ask certain individuals from ballroom [culture]. Like this week, I want to ask Leiomy [Maldonado] to come in. I like different people and try to switch it up to just give people a different vibe. Not too many people from ballroom have seen or experienced [this event] yet—just a few that I know who our friends of mine, and they'll bring their friends. So every month, there are more and more people coming out. The word is getting spread around a lot.

Do you think it's important to bring an underground culture like ballroom out to the mainstream?

I think it's super important. Back in the day, you could have heard me say something like, "I don't know too much if I want ballroom to get super into the mainstream or known about" because that's when it starts to disappear a little bit. But that's happening inevitably, just with reaching more people in different countries and in different cities. It's just getting exposed either through the music or the dance or through YouTube. It's definitely important—well, I feel—to bring my own touch to that.

Like I said, there are a lot of people that are just walk-ins, or people that don't know about ballroom culture. You know, they might have seen Paris Is Burning and see that as a ball night. So I get a lot of tweets of people saying they're coming to their first ballroom event and they're super excited about it. But you know, it's for those people to be respectful because sometimes I've had people that will just jump out on the dancefloor and start doing these crazy moves, but it's just because they don't know yet. So the MCs that I have there, I try to have them explain what the category is, what the rules are, what the judges are looking for, and kind of what you have to do. Maybe they'll call someone out just to display what the category is, and stuff like that.

Do you get a lot of competition participation from the walk-ins or is that usually reserved for the regular ballroom crowd?

The people that will walk are definitely the people that you will also see at Vogue Knights or at different balls around. But then, I do notice that there are some house scene kids—or, you know, just dancers in general—that go to House of Yes already for other events, so there are definitely some new faces that are there and putting on a show for everybody.

At the last [House of Vogue], I guess they had some kind of party right before ours (I can't remember what kind), and some of the dancers stayed there and were doing all these different types of crazy moves. They had a big circle around them and just people watching them and stuff. They weren't vogueing but they were trying to do what they could with it and it was still fun.