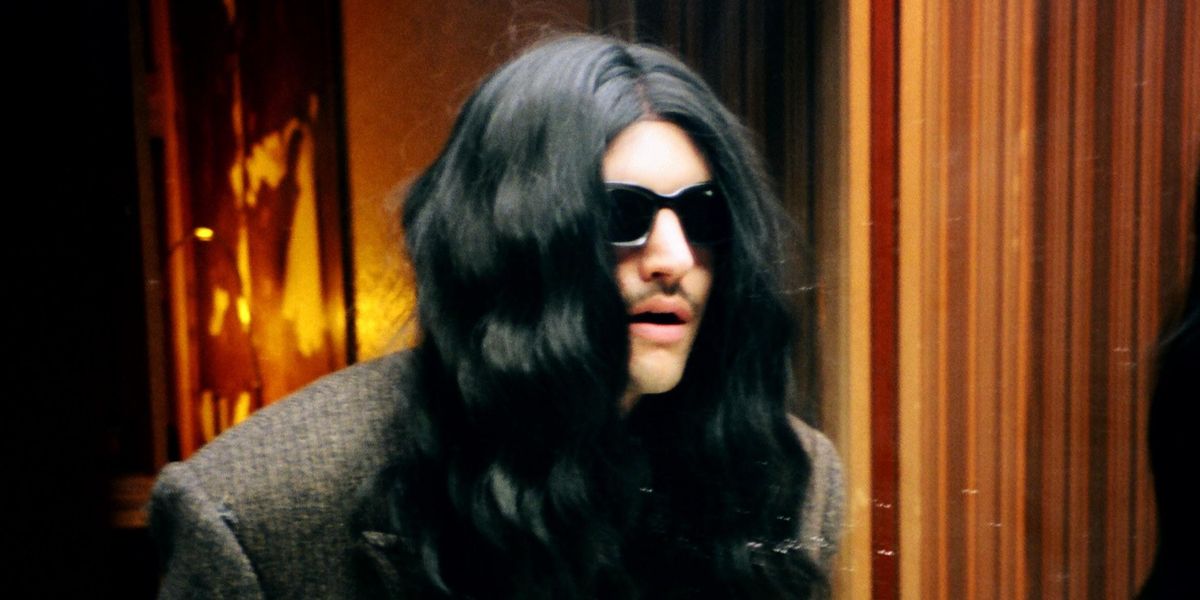 For an artist like Mitch Grassi, who's amassed millions of his own fans from singing in acapella supergroup Pentatonix, it'd be easy to embark on a solo venture using his full name. But the queer musician has chosen to build from the ground up, launching a dark-pop project under the moniker Messer, complete with a revamped image that looks almost like a disguise. So far, he's only worn long black wigs, like a character in Roald Dahl's The Witches with an extreme Balenciaga shopping addiction.

Lucky for Grassi, his audience is ravenous and has quickly latched onto the experimental endeavor. When Messer first debuted a DJ set mid-pandemic during one of PAPER's Club Quarantine parties, a few lucky stans somehow acquired the Zoom code early and snuck their way into the private sound check. Mouths and eyes wide, they all looked near death and in awe of experiencing Grassi in an intimate moment, before being quickly kicked removed by an admin.

Since quietly emerging as Messer during lockdown, the project has built up to the release of his debut Roses EP, available everywhere now. Prior to that though, he contributed vocals to Jimmy Edgar's CHEETAH BEND album on its moody highlight, "READY2DIE" — an early example of the way Messer would come to offer beautiful, soaring melodies against heavier electronic production. "And this time, I finally feel alive," Messer sings. "Cause I can tastе the end."

Related | Jimmy Edgar: On the Prowl With 'CHEETAH BEND'

Roses pulls inspiration from Grassi's upbringing in Dallas' conservative suburbs and, because of that, sounds like an outsider EP that embraces queer identity. Largely with the help of producer Max Hershenow, Messer's songs romanticize reality, from love to pain and possibility. Its title track, co-produced by MUNA's Naomi McPherson, captures its embodiment of "sexual liberation, gratitude and the appreciation for beauty in the simplicity of human life," as Grassi explains.

Below for PAPER, Mitch Grassi (AKA Messer) breaks down all five tracks off his theatrical, gothic breakout, Roses.

My collaborator Max had sent me a demo version of this instrumental track, and I just thought it was totally evocative and lush. I loved the use of the dark-timbre choral sounds in the intro; every intricacy of the production is so vast. This song was written while feeling the psychological effects of the early pandemic. There were moments when I felt I wanted to escape my body and spirit myself away to a completely different place. There's a beautiful sense of idealistic liberty when the chorus drops that I just love.

I began working on this one alone in my living room, on a makeshift studio setup. Originally, this song was going to sound a lot more robotic and dance-forward, but as I started to flesh out the lyrics, I realized how tender and human they felt, and I wanted to reflect that warmth in the music. I created a pretty simple demo version of the song and brought it to Max. He really added some energy and muscle to the final product. We felt that the song needed a touch of guitar drive and our friend, Alaska Reid, was kind enough to lay down some really lovely guitar melodies.

"Boy in the Pictures"

Writing this song was a dream for me. I wanted to paint a picture of the perfect seedy night out with a handsome man that was just as interested in debauchery as I am. I created another simplistic demo for this one, with emphasis on a driving EBM bassline. I wanted the song to be lyrically dark, but also light-hearted, tongue-in-cheek. Collaborating with Max on this one meant beefing it up with lots of queer energy. We are both inspired by the electro clash scene of the mid-2000s and this one sort of felt like an homage to that.

Max presented me with the instrumental, which I thought was really tragic and beautiful. It has this sort of french pop energy, which later inspired the incorporation of french lyrics. The nature of the track really felt as though it were existing in the aftermath of something, as though the end of the relationship I was singing about was like that of a house fire, a total destruction of all that we had built.

This filmic track was provided by Naomi [McPherson] of MUNA. It immediately inspired an array of cinematic images. It's really a feel-good track and a very hopeful one, too. The track is quite vast, so I wanted to pair it with simple lyrics. To me, "Roses" embodies sexual liberation, gratitude and the appreciation for beauty in the simplicity of human life.