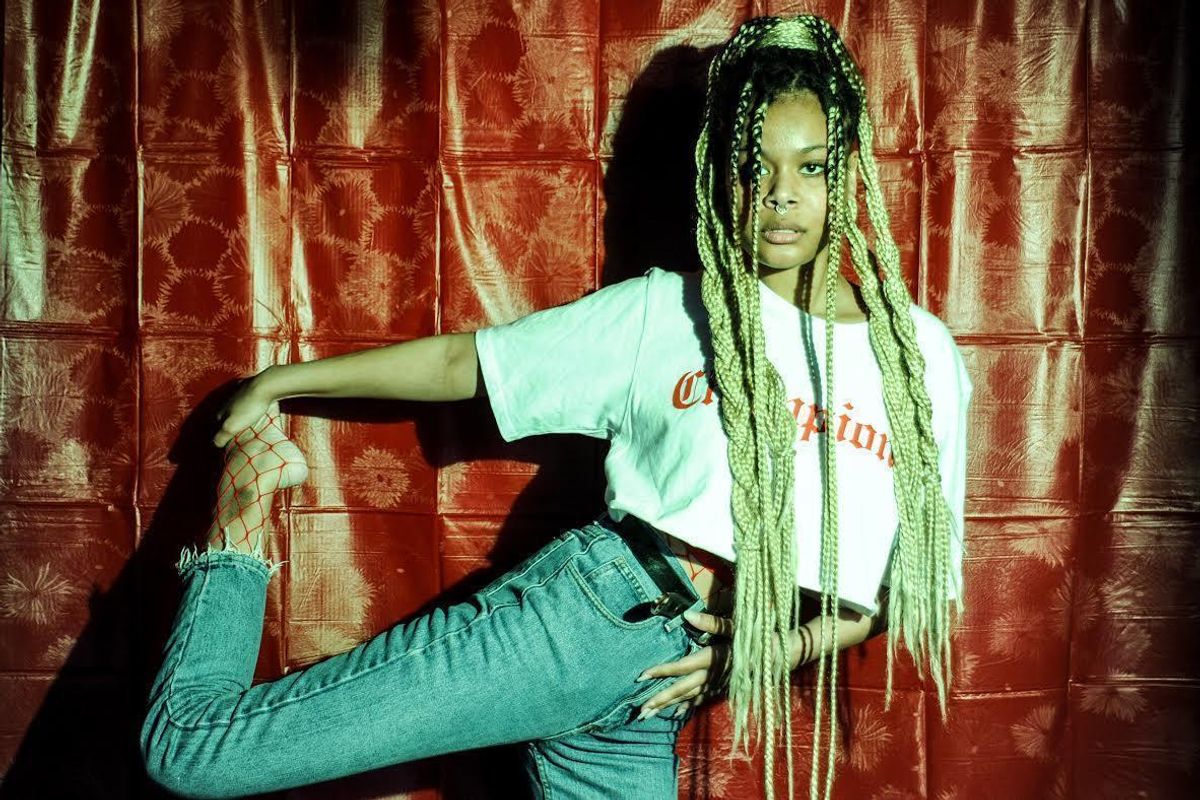 Not many 17-year-olds can say they're about to launch a solo show in New York City. But most aren't Panteha Abareshi, a Tuscon, AZ-based illustrator whose influences range from Jodorowsky's Holy Mountain and Erykah Badu to her own Iranian/Jamaican upbringing. Born with Beta Zero Thalassemia Sickle Cell, a rare condition that causes near-constant pain, Abareshi turned frequent hospital stays into de-facto artist residencies -- rendering on paper a world filled with goddess warriors, female empowerment, gore, and roses, her metaphor for the dual beauty + pain of life. Her vivid work challenges norms surrounding romance, mental health, gender, mysticism, and representations of women of color in the art world.

This Thursday, Larrie NYC, a new female-run-and-operated art space in Chinatown, is teaming up with all-female media and production company The FRONT to present The Girl Who Loves Roses, a behind-the-scenes short on Abareshi's art and process. Commissioned by The FRONT, and shot by curator/filmmaking duo Rémy and Kelsey Bennett, it will screen on continuous loop inside the gallery to coincide with a 2-week pop-up art show of the creator's works on paper. The exhibit will also feature Kelsey's striking on-set portraits of Abareshi. In the past, Kelsey has captured everything from haunted teenagers for VICE to Amy Winehouse and Lady Gaga, snapped on the road with her grandfather, Tony Bennett.

On the eve of her first solo exhibit, Abareshi talks with Paper about art, inspiration, and her metaphysical, desert-inspired "origin story."

Click through to see Panteha's work (many of which will be featured in The Girl Who Loves Roses) as well as behind-the-scenes images from the accompanying video by Rémy and Kelsey Bennett.

Congrats on your collaboration with the Bennetts! How did that begin?

I was working with Polyester Zine for a year-and-a-half as a monthly contributor, also doing special-edition illustrations and comics. The Bennetts came across my work and asked if I'd like to take part in a group show called LIFEFORCE, featuring a range of women exploring the future of "cyborg feminism." I was so baffled they'd want me, thinking, who would show my work in a gallery? But I did it, and now they're close friends of mine.

Later, they wanted me to collaborate on a collective platform for female artists, so I flew out to NYC. Two days later, we made the connection with The FRONT and started filming our doc. It all just fell into place so quickly. We were immensely lucky.

I can't say this without trivializing it, but the moment I'm feeling something -- pain, sadness, inspiration -- I'll jot it down in my notebook. For example, my piece labeled Every Day I Ache was originally a line that resonated because it was genuinely how I felt. Other pieces include blood or gore, but those are just physical embodiments of what I'm already experiencing. Many don't get that immediately and assume I just like horror. But there's intention behind everything I draw, even if it's just a nosebleed.

How do you think your personal experiences have impacted your art?

I started drawing because I was in the hospital and it was the only thing I could do. The experiences I have every day with depression and anxiety also directly impact my art. Growing up with severe chronic pain, constantly in and out of the hospital, made me the person I am. It shaped my perception of strength, empowerment, and my own ambition.

Tell us more about the role mystic imagery and deities play in your work.

I'm not at all spiritual or religious but I do think that the absence of traditional spirituality is how you find self-enlightenment and intellectual power. Specifically, the ways in which feminine power ties directly to nature. The inherent higher power of females working together is so untapped, but can be amplified when we collaborate, respect and love each other. When I'm drawing these powerful women, it's really about understanding myself and reaching a higher level of understanding more than mysticism. Even though I sometimes choose goddesses to represent those ideas.

For someone who doesn't believe in mysticism, you certainly have an excellent goddess origin story.

Ha! To explain, we've been working on a piece inspired by the I'itoi maze near Tucson, Arizona. It's a sacred place for the Tohono O'odham Nation. Part of the I'itoi legend is that here is where the namesake deity was born. Traditionally, the maze is a metaphor for the two paths of self. Not just self-enlightenment, but enlightenment as a whole. When you reach the center, you're supposed to be one with yourself, nature and the gods. My dad is from Iran, where there's a family practice of burying your umbilical cord near a "place of intention." So, if you'd like your child to be a devout Muslim, you'd bury it outside the mosque. An engineer, outside an engineering university. Instead, my dad took the cord and buried it inside I'itoi's maze. Rather than choosing a life path or a career, he wanted me to know and be true to myself. So this maze represents self-empowerment, but also an inspiration. It's become an ongoing concept in my work.

You also frequently explore legends. Could you talk about that?

Since my dad was born in Iran and my mom in Jamaica, I grew up with a very diverse understanding of legends, gods and goddesses. All mythology, not just from Jamaican, African and Middle Eastern origins, but also Greek and Norse. It's always stood out to me, the important role gods and goddesses have played in a culture, and how we look to legends to draw standards for treatment of women and their place in society.

Goddesses definitely seem to be making a comeback.

I think the reason this idea is so popular with my generation is that even with all the steps toward equality we're taking women are still so mistreated. It's the height of empowerment to look to legends, these women who have everything and every kind of power, for insight.

What are some of your other influences?

Other busy artists inspire me to work harder. Films by Jim Jarmusch, David Lynch, '80s Japanese slashers with strong female characters. Definitely Holy Mountain, and its cinematography. I would say my favorite writer is the Japanese novelist Haruki Murakami. Reading his characters and descriptions, they're all such odd weirdos but everyone can relate in some way. The words he uses inspire my illustrations of girls -- their bodies, whatever they're holding. Also, women like Solange, Erykah Badu, Angela Davis. I remember being 8 or 9 and picking up one her books at the library, going down a rabbithole learning about her role in the Black Panthers.

Frida Kahlo credits her bedridden period with inspiring her to work. How has your time in the hospital impacted yours?

Illness forces you to reevaluate how you spend your time. I've lived with Sickle Cell for my whole life, but in 2014 it took a turn for the worse. This is not an exaggeration, but I've been in non-stop pain since fall of 2014. I spend lots of time in bed, unable to walk, recovering, waiting for the pain to go down so I can move. But it also gives you a lot of time to work and think about what you want to be making. The first year after I started drawing I made myself sketch every day. I'm very lucky I was given time and space to do what I want creatively. Because I was so isolated, I wasn't trying to make art for other people. I was just drawing for myself.

You talk about being "anti-romance" -- what does that mean exactly?

My views on romance are so present in my artwork. It's probably related to my depression and physical limitations, but I just don't care about dating. Obviously it's "fuck gender norms" but that's only the bare bones of how I feel. The way dating, love, and romance are portrayed to young girls is toxic. They're taught to devalue themselves, that dating and sex are the height of importance. I thought it was horrific that girls at 5 were given dolls and told to be excited about having babies. I'm opposed to the whole system. A big part of why I use roses in my art is to reclaim my favorite flower from these romantic associations.

I heard you were recently in Japan?

Through the Make a Wish Foundation, I recently asked for a trip to Tokyo to see Mount Fuji. At its base is one of the largest collections of Picasso's obscure works, paintings, ceramics in the world. I also got to Tokyo with my dad, my favorite travel companion.

Most teens wouldn't exactly call their dad their best friend.

My dad is unique. He's a software engineer that programs telescopes to move and capture stars. He wrote a work of code that took him all of 2016 that guides telescopes to actually predict their movement. He created the code from scratch so anyone can use it, and was invited to Scotland to receive an award. I got to tag along, and it was wonderful.

What do you have up next?

I'm off to college in the fall and am in the process of deciding where I want to go. So for next 4 years, I'm going to be studying, and improving as an illustrator. Ideally doing more collaborations like this. But in terms of my own artistic practice, I want to work larger scale and with textile design. Also, eventually I'd like to do outreach work with kids with learning disabilities, and mental and physical illnesses. I think art therapy is immensely undervalued, and I want to contribute to the work.