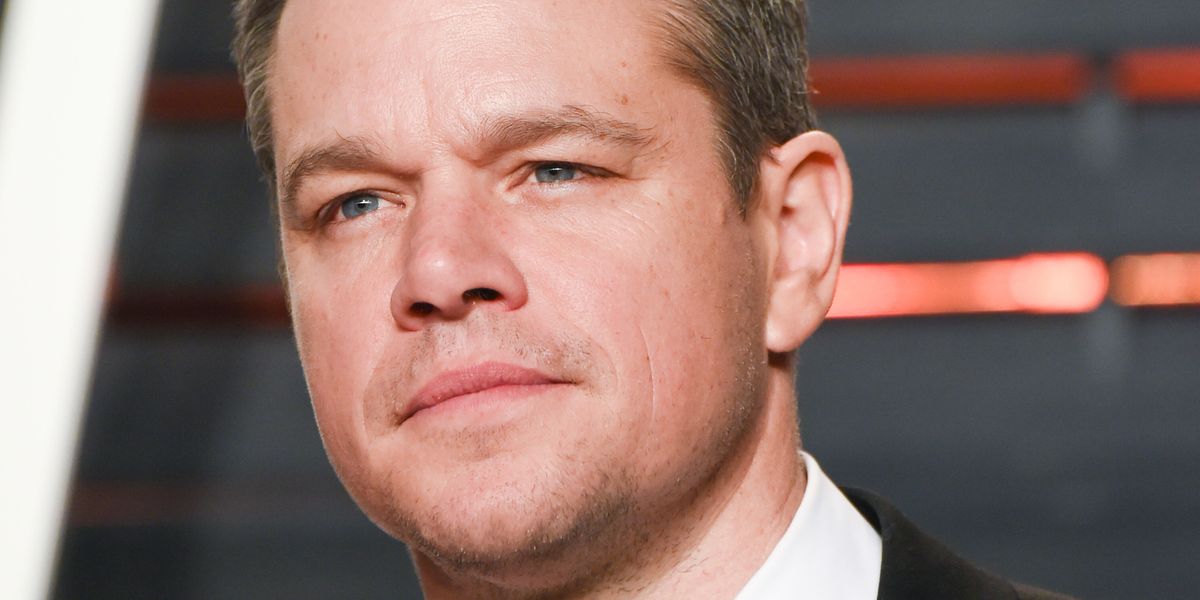 In Wednesday's episode of ABC New's Popcorn With Peter Travers, Matt Damon decided to share his views on the torrent of sexual assault and harassment allegations currently pouring out of all industries, but starting with his own: Hollywood. As he attempted to delve into the nuance of the "spectrum of behavior" that defines sexual assault, the actor made some uncomfortable comments that gave a far wider berth to perpetrators than we are currently seeing in mainstream media right now.

"I think we're in this watershed moment. I think it's great. I think it's wonderful that women are feeling empowered to tell their stories—and it's totally necessary," he began. "You know, there's a difference between, you know, patting someone on the butt and rape or child molestation, right?" he continued. "Both of those behaviors need to be confronted and eradicated without question, but they shouldn't be conflated, right? And then we can talk about rehabilitation and everything else. That's criminal behavior, and it needs to be dealt with that way. The other stuff is just kind of shameful and gross."

Ed note: patting your employee on the butt, or pressing your erection on her, or sending her sexually suggestive emails or DMs or trying to kiss her is sexual harassment, which is illegal.

He then went onto discuss several specific cases, giving his opinion on what he would have liked to see happen in each. In the case of Al Franken, he said he would have "preferred if they had an Ethics Committee investigation," adding, "We are so energized to kind of get retribution." Damon says Louis C.K.'s apology for masturbating without consent in front of several women was "arresting," saying, "I don't imagine he's going to do those things again. You know what I mean?" Which is a lot more confidence than I personally have in the comedian, but, Damon went on to argue, "I imagine the price that he's paid at this point is so beyond anything that he — I just think that we have to kind of start delineating between what these behaviors are."

Damon reiterated his previous claims that he wasn't aware of Harvey Weinstein's pattern of sexual predation, saying, "Nobody who made movies for him knew…Any human being would have put a stop to that, no matter who he was. They would've said absolutely no." However, the women affected by Weinstein did know, as did men who worked for him, at least to some degree.

Damon praised director Scott Ridley's decision to reshoot his film, All the Money in the World, without Kevin Spacey, recasting Christopher Plummer as the lead. "That was a total business decision by Ridley. Nobody right now is in the mood to see a Kevin Spacey movie."

Related | Kevin Spacey Has Been Accused of Assault by HOC Crew, Dropped by Agent and Publicist

As for Casey Affleck, the little brother of his best friend Ben and accused sexual harasser, Damon said, "It depends on what the accusation is. It depends what's going on. If it's a friend of mine, I'm always talking to them. I know the real story if it's my friend." And as for a hypothetical colleague being accused, how would Damon handle that? "If it's a colleague…I don't know…I guess it depends on the situation and the allegation and how believable I think it is."

"We live in this culture of outrage and injury, and, you know, we're going to have to correct enough to kind of go, 'Wait a minute. None of us came here perfect,'" Damon explained.

He was right about one thing, which is that if you make backwards (or even ambivalent) comments about sexual assault, there will be outrage, and you will be dragged:

no one has worked harder or more consistently these past few months to get himself cancelled without actually harassing anyone that we know of than Matt Damon
— ROSE BOWL GOER AMANDA MULL (@amandamull) December 15, 2017

I start to think maybe most men are learning about sexual harassment & assault? Then I read an interview with Matt Damon and realize oh, how terribly naive. Of course not https://t.co/9pgQmmjT9O
— Olivia Goldhill (@OliviaGoldhill) December 15, 2017

The problem with responses like the ones Tom Hanks & Matt Damon gave today is that men are taught their opinion is important even if it's about an issue they don't know much about, while women are taught to apologize for their opinions even when they're well versed in the topic.
— Allison Gilbert (@AllisonWynifred) December 15, 2017

So Matt Damon's take on sexual assault and harassment is “At least it's not rape." Cool. Shoutout to my former boss for only demeaning me with his words and not his dick. https://t.co/OjyezeEZbk
— Brohibition Now 🏳️🌈 (@OhNoSheTwitnt) December 15, 2017

how does Matt Damon even manage to get words out around the foot permanently stuck in his mouth
— Angie J. Han (@ajhan) December 15, 2017

While some took to Twitter to defend Damon's "nuanced" take on the issue of sexual assault, who gets punished and how, it's precisely nuance that he is missing.

Another day, another take we didn't need.