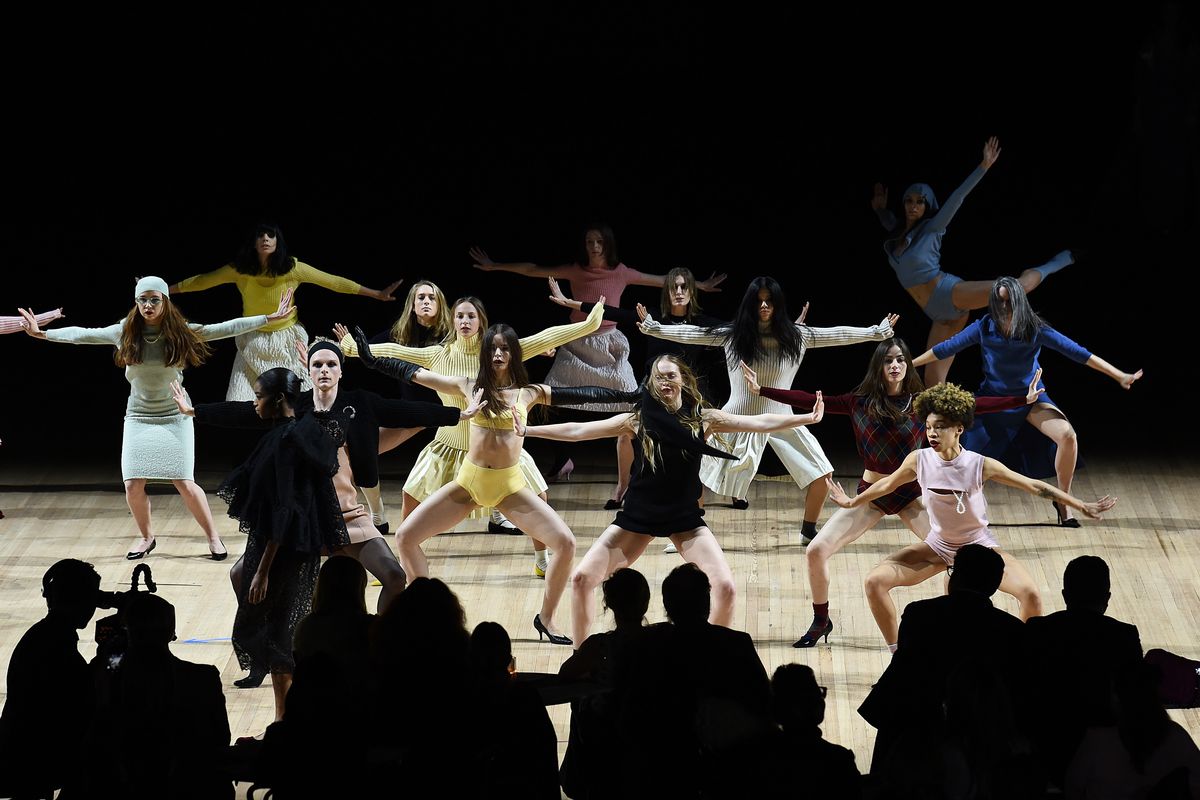 When it comes to New York Fashion Week Fall 2020, the biggest runway trend was happening off the catwalks. Whether it was Marc Jacobs, who enlisted choreographer Karole Armitage to stage 50 dancers milling and even at times running about the expansive Park Avenue Armory, or Susan Alexandra, who staged a full-realized production of Susan Alexandra: The Musical starring a slew of NYC stage vets including Larry Owens, this season felt distinctly in search of new mediums to present work.

Related | The 9 Biggest Trends From NYFW

This isn't an entirely new concept. Maison Martin Margiela famously showed his third collection in 1993 at a children's playground. "They'd asked the kids' parents for permission to use the playground, and they said, 'Yes, but only if our kids can come,'" Raf Simons, then an intern at Walter Van Beirendonck, recalled. "The models appeared in long white clothes, and suddenly the kids started to play with them. It was so moving. Everyone was crying. Me too."

It's that sense of playfulness and wonderment that NYFW seems in search of, as more and more designers eschew the traditional "walk, walk, fashion baby" runway.

"I feel like we pour so much time and energy and money into fashion week that we might as well make something that stays with people far after the show ends," says Susan Korn, the designer behind the Susan Alexandra brand. "Music stays with people and I felt it was such a riveting way to connect to people." She did this effectively last season when she hosted a Bat Mitzvah for her Spring 2020 show complete with a pie from Williamsburg Pizza embellished with a ricotta Star of David.

For Korn, it was less about the stunt, and more the desire to make her audience feel something. This was evidenced immediately after the show when I encountered a friend crying tears of joy. "Why are you crying?" I asked her. "I don't know," she responded, and hugged me. Korn says reactions like this are marvelous. "I think the success of my brand is tied to the feelings it evokes — mostly nostalgia — and I'm so thrilled that we made people feel. Even in the short period of time that the show was conceived, we formed a family and mini community and I love that this cold, exclusive world of fashion could also serve such a beautiful purpose."

For Jacobs, it was about conjuring something a bit more kinetic than season's past. "After last season and the joy of seeing each model playing up their 'character' I thought we had to do something with more movement, more joy — but, in a far less flamboyant way," Jacobs says. "More raw. More cool. But, way more energy. Demonstrative. An outward demonstration of innermost feelings." Jacobs's show notes underscored this idea noting that the performance was intended to celebrate chaos and form "by conjuring the outermost expressions of our innermost feelings," and show the power of storytelling through movement.

Jackson Wiederhöeft, the former Thom Browne designer, also had joy on the brain with his breakout presentation debut at Spring Place's Sunken Living Room in which he transformed the room into a living music box with models on rotating pillars. "I think people react much differently when they're forced to sort of become a part of the show, Wiederhöeft says. "Suddenly they take on the emotion of the room. You almost feel like you're crashing a party, until you let yourself become a guest at the party, and suddenly it's a whole new perspective. I think ultimately, that's what I'm doing with my brand — putting on a show that everyone's invited to, and trying to fill up all the seats."

Others used their show to put focus on issues most important to them, like Chromat's Becca-McCharen-Tran, whose sustainability-themed work-out class was presented in lieu of a runway in the basement studios of Rise by We gym in Fi-Di. McCharen-Tran says it wasn't just about recycled materials — which the brand does and has been utilizing — but also making sure her team, who is designing and building the collection, isn't exhausting themselves to the point of being unproductive. This unspoken reality rears its effects on runways big and small every season.

"A presentation felt like a more low key, less stressful way to celebrate the new collection, and it fit much better with the story we were telling about building our own championship athletic team as a protest against sporting events that reinforce an oppressive gender binary," McCharen-Tran explains.

Her research for the collection began by researching the Olympics, an international sporting event also seen by some as rather out of date due to certain policies. "We read all about how the [International Olympic Committee] and [World Athletics] are currently attempting to ban runners like Caster Semenya and Dutee Chand because their gender does not conform to the organizations binary definitions. In response, we wanted to propose an alternative to segregated sports, a place where all athletes could compete as they are. Trans women are women, gender is more than just two categories and everyone has the ability to self-identify — both on the runway, in everyday life and in athletics." In response, McCharen-Tran and her team created a Chromat Olympic Team with athletes all along the gender spectrum that worked out side-by-side as the audience watched them, taking in the newest collection.

Related | The Chromat Babes Got Physical

And let us not forget Helmut Lang, which presented its Fall 2020 show without the collection even present at all. Like the other designers mentioned, seeking a sense of joy was top of mind for Creative Director Thomas Cawson — as was paying homage to the images that inspired the collection: Sunil Gupta's 1976 images of "cruising" men on Christopher Street. "[Those images] were so influential to the development of our collection that to have had those looks just marching by on a runway would've done a disservice to the project," Cawson says. "We wanted to show those joyful parallels between life before the AIDs crisis and today's broader celebration of New York's inclusive creative community. To clearly draw that comparison, it was essential to show the imagery together in an intimate gallery setting."

It doesn't take much doing to find a throughline here: joy, of course, and the aspiration to use their collection's presentation to make people feel, to make people think, consider, re-consider, to say something bigger. It's as though these presentations were less about the clothes — after all, they'd be photographed ad nauseam — and more in search of a feeling, maybe bygone, maybe just ahead, but unquestioningly there.