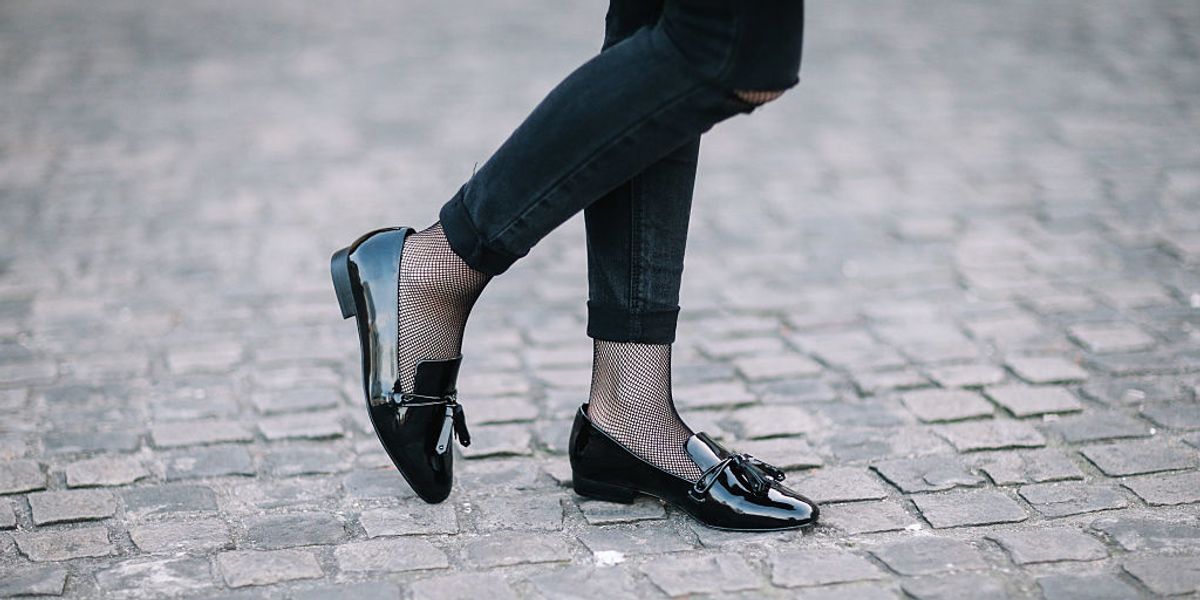 Goth comes in many sundry flavors. There's industrial cybergoths who dance to German aggrotech, fashion goths who worship at the altar of Rick Owens, and your garden-variety Tumblr goth, who wears oversized t-shirts covered in pentacles and has mint green hair. It's a nearly 40 year-old subculture that stubbornly refuses to die; rather, it's proven surprisingly malleable in its determination to remain part of the pop conversation — if not a language within that conversation itself. Goth does so by adapting with the times. In 2018, fashion plays a huge role in how we translate our hopes and fears. Those fears include a pervasive sense of existential resignation that blankets our generation like the Zoloft sad cloud. We've never worked harder for so little money. Trump is president. Cartoonist Bianca Xunise says it best: "after the 2016 election I needed people to know that I am in a constant state of mourning." That rippling dread will work its way into our wardrobes eventually.

This is where Madewell goth comes in. Madewell goth is a subtle, low-pressure style that combines the melancholy of the Great Recession with the well-meaning aesthetic of Madewell's signature skinny jeans and loose button-downs. Think "Just Kids"-era Patti Smith, with her collection of sullen white shirts and dark, ripped denim, but in the era of lax office dress codes. The ease is seductive: " Throw a harness over a white tee and you feel like the forgotten member of Depeche Mode," said Xunise, who coined the term "Madewell goth." It's gothic minimalism, with modern tailoring and silhouettes that belie its lack of forethought in the morning. Staples include black jersey turtlenecks, straight-leg trousers, off-white denim, collared shirts, and fishnet socks.

It caters to tired, stressed-out millennials who don't want to change outfits to go to a DIY show after work. It's for those who gave up obnoxious, vertiginous heels the moment Lady Gaga's career quasi-tapered off. Madewell goths are too overworked to think about their wardrobe, but still have a collection of 4AD band tees — because it's a lifestyle, not a phase, Mom.

Is Madewell goth a concept? I feel like that's where I fall sometimes.

To be clear, nothing about Madewell, or its parent company J.Crew, is goth. The American company is committed to being American, or an idealized version of it; their clothes are nu-preppy, with easygoing staples like Chino slacks and Fair Isle sweaters. Their stores are bright and semi-rustic, featuring hardwood floors and white shiplap; rows of tan Chelsea boots line the walls next to Buffalo check tops in every neutral color. A cheery staff is always eager to help you select your next pair of ankle-length denim. "Can I help you find your size?" they kindly ask. A sincere question, but one that sends any self-respecting goth careening towards the door. At Madewell, you're vastly more likely to find a yellow tee with "live, laugh, love" emblazoned across the chest than a pair of black platform boots.


And yet, plenty of millennial goths shop at Madewell. It's almost a joke on Twitter. The company, who deals in subdued hues, makes lots of clothes in black. Many of their reasonably-priced basics are available in black or other dark colors, along with white tops in goth-friendly styles (plain white shirts are very goth, you see). Their hyped-up skinny jeans are available in a flat black color that they claim is resistant to fading — a goth's denim dream come true. The thing is, Madewell's clothes fit really well. They're also designed to require as little effort as possible, while still looking Instagram-ready, which is the crux of this trend. Throw it on, look sad and fly, leave the house.

Shoes are similarly chill. Madewell goths favor flat shoes, because they're so much easier; remember, ease is key in this trend. Footwear needs are generally met by 3-hole Doc Martens, white Chuck Taylors (because black Converses are too obvious), oxfords, and black penny loafers. Those penny loafers are the perfect shoe to match with subtle fishnet tights and a mini skirt, or wide-leg overalls with heather gray socks. At all price points, from Bass to the coveted Gucci loafers, they're accessible in every market. Best paired with high-waisted jeans and a Blackest Ever Black tee, loafers can also be worn all year; even during a goth's biggest annual foe: summer.

Madewell goth is also open to everyone, regardless of their gender presentation or body shape. Its entire ethos is about not thinking too hard about your goth ensemble, and sticking to monochrome pieces. And despite its namesake, Madewell isn't the only store to cop tailored basics. "I've gotten some great shrouds from the noihsaf.bazaar [Instagram] account," said Nina Berman, a Queens, NY-based communications assistant. Tricia Gillbride, a writer, cites Muji and millennal standby Everlane as her retailers of choice for black basics. For plus-sized goths, Universal Standard offers minimal basicwear. The lack of fussiness about this style also means that gender markers, like embellishments or feminine silhouettes, are less visible. "I actually got more goth as it became more important to me that I read as queer," said media intern Emily Washauer. She looked to Madewell goth hero Carrie Brownstein for style notes, and eventually grew to "love the simplicity."

This style is distinctly American, in that it follows the rules of traditional American prepwear. Similar European blasé-goth styles are born through their own microcultures; Berlin's aesthetics, with its dad sneakers and black sports bras as outerwear, are meant to get you passage into Berghain. In Scandinavia, white long-sleeves with noise band logos, giant bomber jackets, and mom jeans saw increased visibility from the Posh Isolation collective, though it's a goth play on every photo from Hel-Looks.

Ultimately, Madewell goth is the United States' unique response to collective trauma, without the emotional energy for flashy displays of rebellion. It's simple, it's unconcerned, it didn't get enough sleep last night. This style is not meant to make a grand statement, it's meant to show the world that you're still here despite the slew of bullshit being tossed at you. Madewell goth says "look, I can't even right now." These days we all know exactly what that means.

Peep some images below for Madewell goth inspiration.