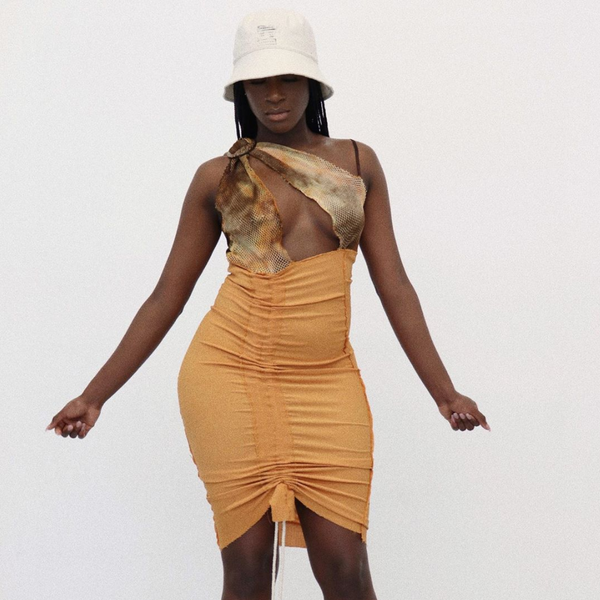 Almost overnight, designer Jedidiah Duyile's 4-year-old label Loudbrand Studios suddenly became the brand to look out for thanks to The Kylie Jenner Effect™.

After the reality star posted photos of herself in their Raw Edge Vashtie dress (and fueling a debate after initially not tagging the designer), everything on Loudbrand Studios' e-comm site immediately sold out, including cling-fit trousers and stretch tie-dye dresses.

For the small, all-Black team of just three, the approval from someone like Jenner is obviously a big boost to their business. (The brand went from a little over 1,000 followers to almost 50k in less than a week.)

"It's extremely exciting because I always believed in the brand, so it's amazing to see someone like Kylie, with her influence and great style, to see what we see," Duyile told Vogue UK.

But Loudbrand Studios has been championing and redefining "sexy" dressing since its inception, utilizing casual, vintage-inspired materials for daytime looks that show off skin and hug the body. The brand regularly casts a mix of friends and models of color to show off the latest drops.

Duyile has long used her brand as a platform for inclusivity and empowering Black women. "Society pushes Black women to the bottom of the barrel, but regardless of this we overcome," she added in the interview. "We want Loudbrand to reflect a confident Black woman, her talent and what she has to offer to the world."

While all of the pieces on Loudbrand Studios are currently sold out, Duyile encourages users to turn on notifications on the brand's Instagram for when items will come back in stock.

As for what's next, the Duyile is looking forward to connecting with her growing community at a challenging time for Black independent designers. "The future of the creative industry remains uncertain, but we have to keep supporting each other," she said.