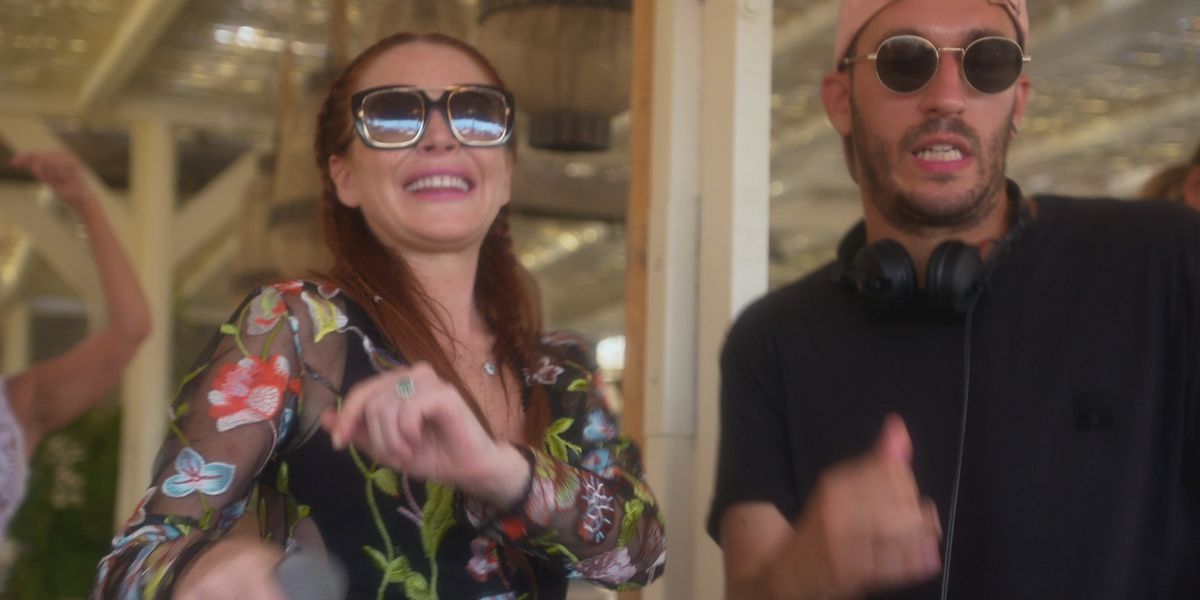 Well, here we are. Episode three of Lohan's Beach Club, a show about making it big in the Greek island tourism business, sometimes starring Lindsay Lohan but mostly starring her conniving business partner Panos and his many jaunty hats. Plus their thirty or so (it feels like) blandly interchangeable young American employees, who I truly hope get to keep their tips.

As usual there is a lot of explanation and recapping leading into this episode, I guess because the concept is so indecipherable and confusing. We open with a montage of Brent Drama from last week. If you will recall, Brent was scripted to be particularly obnoxious in the previous episode, particularly to his crush, Sara. Sadly this montage likely means tonight's episode will focus on similar themes.

Or will it? Two of the most generic American hosts, May and Aristotle, appear on camera talking about how happy they are to work for Lindsay. Then we flick to Panos, upset that too much drama is going on between the hosts. He says he wants to hire a new person to mix things up. We get an odd sepia-toned flashback to him and Linds looking through resumes. Hmm.

Now everybody is sitting around the table for their usual morning pre-work meeting. Oh to have but one gentle and constructive conversation with the MTV person who edits this show! Lindsay breaks the news that someone new will be joining the team. Everyone's confused about whether this means a current member will have to leave. I am too. Once again: is Lohan's Beach Club a competition, or not? What's the prize? What are the stakes? Why are any of us here?

Panos and Lindsay don't give any info about when the new host will arrive. In the meantime we are introduced to yet another uh-mazing client who Panos wants the current hosts to look after. Same watching-paint-dry formula as previous episodes, I guess. His name is Alesso and he's a slightly famous DJ.

Cut to Brent bragging about how he once served the Chainsmokers. Something tells me they got on well.

Also, this is a morning meeting, but several of the girls are drinking cocktails. No shade, just observation.

Jules volunteers to look after Alesso — it would be her honor — but Panos says nuh uh. He wants Brent and Jonitta, two enemies, to do it. Of course.

"It's just frustrating, I haven't got a chance to show I'm serious about this job," Jules says sadly. Girl! Go for a swim. Have another cocktail. Who cares?

Now Panos is talking about how he expects Jonitta, who according to all evidence we've seen so far is a perfectly fine host, to prove herself today. If she doesn't, "she's done." Ugh, this show's editing! Show me one example of Jonitta screwing up, ever!

Jonitta, it turns out, is also confused. "What the hell do Panos and Lindsay want from me?" she says. "I've literally done everything they asked. I guess I'm going to have to work ten times harder to prove myself to Panos." Or you could just go home and work at a normal, non-MTV nightclub and have a nice, reasonable time. The faces of Panos and Lindsay could fade to distant, vodka-scented memories.

Back to the Brent Drama. He's reflecting on the previous episode, where Sara overheard him calling her a six. He's unsure whether he has a chance with her now: "If someone had called me a six, I'd be done with them." Brent, honey. If someone calls you a six, they're being generous.

We see footage of him apologizing to Sara and promising to make it up to her. "We'll see if I can't rope her back in with my magic and my charm," he says, without even bothering to emote.

Sadly it seems that this episode, like the last, will completely focus on Brent. Even though there are literally so many other cast members, and will soon be one more. Natasha, the VIP client from episode one who Brent literally had sex with, is back. We get sepia footage of them hooking up. Now Brent is nervous that Natasha will further jeopardize his chances with Sara.

Completely without segue, Mike is on camera, talking candidly about his bisexuality. He says it's hard because girls are turned off when he tells them he also likes guys. We learn that he and Jules are flirting right now, and he likes where things are going. I guess… they switched the camera off for those scenes accidentally?

Panos appears via voiceover. Lindsay really isn't in the episode at all so far. We're almost halfway through. Panos says he hates to see Jules and Mike flirting. His employees, we are reminded, are strictly not allowed to have fun. Great business strategy, terrible television viewing. That's Lohan's Beach Club!

Natasha, the VIP client, is here. Panos wants Brent to attend to her, uh, needs, right away. Natasha is wearing big sunglasses. Brent says he doesn't want to be with Natasha because it will upset Sara. Panos is so pissed, suddenly. "BRENT USED TO BE MY STAR," he says, with anger.

Lindsay finally makes a brief appearance, wearing a fun Moschino belt. "Everything is getting personal and it's starting to bother me," she says, coldly. She decides to show her stupid dumb employees how it's done.

Cut to Lindsay wrapping Alesso's feet in bandages, without a whole lot of explanation.

Back to Jules. She's still upset that she didn't get to hang with Alesso. She promises to work harder!

I hate this stupid show about work. I get enough work... at work, you know? I don't get how they manage to make a sexy Grecian beach vacation spot so completely boring.

Lindsay appears again. She has a microphone and is cheering on a customer who has started dancing up on the bar. "This is the Lindsay that I love," says Panos, in monotone. "She knows how to have fun." Panos joins in and sprays the dancing man with a champagne gun. It is early afternoon at best, by the way. Watching this show really does feel like being day drunk: queasy, uncomfortable, somehow a bit sweaty.

Now Lindsay is shooting champagne at people. Panos is LIVING FOR IT! This really is the Lindsay he knows and loves.

Not the hosts, though. They're disposable workers and exist only to make money for Lindsay. That's the premise of this show, and don't you forget it. The hosts are all asked to form a line up, as though for a firing squad, so Lindsay can spray them with the champagne gun.

The hosts line up

Jonitta is not having it. She says she feels like a "peasant." Could it be that the workers are rising up? Aristotle, an idiot, expresses concern for the girls getting their pretty hair wet.

Lindsay can't pull the trigger, so Panos does it. He's so excited to do this. He loves shooting peasants. Jules, wincing, says getting hit by the high pressure champagne is physically painful. This show is so dark.

Panos is talking about the new host again. Where is this guy? Will he lead the uprising? I'm tired.

It turns out Mike, the bi bartender, knows the new host, whose name is Alex. They worked together at a gay club in LA. And perhaps... something more. "I've done things with Alex before," Mike tells the camera. "When you're drunk, things happen. But I don't want to get in the way of flirting with Jules."

He brings up the subject of his sexuality again. "I see bisexuality as a gift," he says.

Now the hosts are having a day off. That's nice. We see them all eating calamari (Greece!) at a restaurant. Mike is talking about Alex and how they worked together. Everyone is frustrated that yet another person is being added to the mix. Same. The group goes out dancing, and we see Mike and Jules kiss on the floor. Cute.

Now everyone's going out to another club, to see Alesso perform. Confusing timeline, as usual. And Panos is there, suddenly. He says he is only letting them have this night off in order to promote his club to other patrons. So I guess we're not going to get any fun drunk party scenes after all. Classic this show!

Panos overhears Jonitta telling a random person about LBC. He loves this, obviously. Suddenly she's back in his good books. But his mood turns as he watches Brent and Sara get flirty. Guys, Panos is so scary. He is sitting on the sidelines of a sleazy Mykonos nightclub, watching his employees, on their one night off, making sure they don't enjoy themselves. He makes me miss Lindsay, which, wow.

It's finally the big day. Alex, the new host, is coming. Gabi, the fun pink-haired host from episode one who has sadly received zero screen time since then, says she's nervous to compete with a new person. The others agree.

Mike is picking his old flame up from the airport. He's already distancing himself from Jules. "I don't want to get wifed up," he says. We meet Alex, who somehow looks like an exact composite of all the other male hosts. Beefy, beard-y, drunk-looking.

It is clear that Alex and Mike are immediately going to start sleeping together. All the girls miss the memo and say he's "smoking hot."

"If I could build a man, he'd look just like Alex," Jonitta says. She's devastated when he starts talking about a boyfriend, but then immediately perks up (she's holding a cocktail, as usual) at the thought of having a fun gay man around and starts telling him all the gossip from the house.

Alex tells the camera he is here to WORK and not engage in DRAMA. Lindsay and Panos will love this guy! He also says he doesn't understand Mike's bisexuality, which is gross, actually.

Morning meeting time again. Panos praises Jonitta. He is angry at Brent and Sara for flirting. Remember the rule: no fun!

It is revealed that Alex speaks Italian, which is useful because many of the clients are Italian. Everyone is scared that Alex is a better little worker bee than them. He is definitely not going to lead the uprising, which makes me sad.

The episode ends with Panos promising that the hosts "haven't seen anything yet."