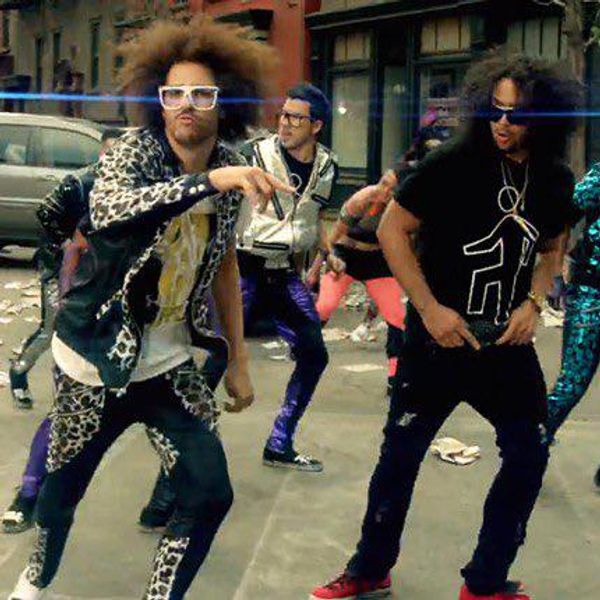 With Biden back in the White House, it feels right to reminisce about some of the Obama-era art that once blasted from Beats Pills across the nation. Or at least that's one possible reason why PopCrave just saw fit to announce that this ordinary-seeming Monday actually marks 10 years since uncle-and-nephew duo LMFAO released their monster hit single "Party Rock Anthem," feat. Lauren Bennett and GoonRock.

Wow. A decade of party rocking! Has enough time really passed that we can affectionately reconsider the cultural impact of Redfoo and SkyBlu, as we might an ancient meme? On the one hand, the song is objectively bad, and poptimism can truly only go so far. On the other, I just watched its music video three times in a row and felt genuine nostalgia for lensless white sunglasses.

Catchy though it still may be, "Party Rock Anthem" is as cringey in retrospect as it was a decade ago. Not a cultural reset so much as a dying gasp, the lab-designed banger already sounded dated upon release, its meme status predestined. Preceded by LMFAO's tonally-identical hits "I'm in Miami Bitch" and "Shots," with crunk legend Lil Jon, it's way more 2008 than 2011, also paying tribute to such bottle service backing tracks as Far East Movement's "Like a G6" and Taio Cruz's "Dynamite."

The song's fate reflects as much. "Party Rock Anthem" blazed bright then burned out. Certified Diamond and apparently the sixth-biggest Billboard single of all time, it was so hideously successful that the two men responsible were forced to issue an apology: their debut album Sorry For Party Rocking, which also spawned the more minor hit "Sexy and I Know It," was released in June 2011. They ended up performing the latter track in a mashup with Madonna's "Music" at the Super Bowl, to mixed results:

This story has a happy ending. A novelty club music act of the kind that no longer plagues today's curiously fratboy-free Billboard charts, LMFAO ended up doing the honorable thing: laugh their freaking asses all the way to the bank, then disband in 2012 to pursue other interests. America had moved on to "I Love It" by Icona Pop. The party was over, and they knew when to dip.

Post-music career Redfoo memorably entered the professional tennis circuit, even facing off against the likes of Serena Williams on the court. He's also big into veganism now. Meanwhile Sky Blu recently scored a TMZ 'Memba Them column, but it doesn't provide much recent info. One can only hope that they're both still making time for a daily shuffle.