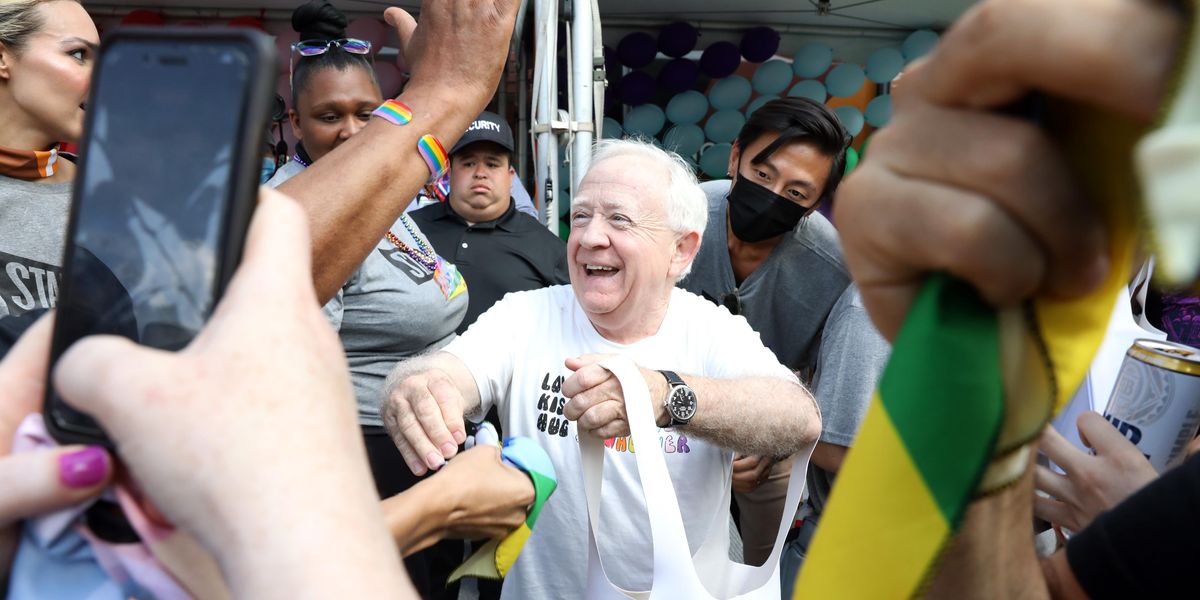 It feels like a pizza oven outside as I beeline past Lady Bunny, spinning a DJ set in a full face of makeup and hair as high as the heavens, to make my way into the central air conditioned Zion that is Nordstrom Local West Village. It's Sunday morning, the beginning of the final act of a Pride weekend that started with a Madonna performance in the wee hours of Friday morning at the Boom Boom Room and will informally conclude with the third annual Queer Liberation March.

I chug a bottle of water and gesticulate wildly with a Pride-themed fan in an attempt to fully liberate the sweat from my body. It works. Around a bend, I spot Leslie Jordan, 4'11" and beaming, trying on shoes. "Oh I just love these," I hear him coo in that familiar Tennessee twang. With his shoes for the day now procured, Jordan is ready.

Of the social media stars who emerged through the pandemic — Sarah Cooper and Jordan Firstman come to mind — few had as much gusto and panache as Leslie Jordan. Best known pre-pandemic as the slithering Beverly Leslie on NBC's Will & Grace (a role which earned him an Emmy), Jordan's career is experiencing a renaissance, thanks no doubt to an Instagram page that now boasts over 5.6M followers. He has a small role in the Oscar-nominated The United States vs. Billie Holiday, and is now starring on the new Fox series Call Me Kat co-starring Mayim Bialik, Kyle Pratt and Cheyenne Jackson. And to top it all off, in April he released his debut record.

While it might seem like it's Leslie Jordan's world and we're just living in it, the actor has long been putting in the work, first catching the attention of many for his role as Earl "Brother Boy" Ingram in the cult classic Sordid Lives in 2000. It's roles like this, along with those on Will & Grace, American Horror Story and, most recently, Netflix's Special, that have given Jordan a career as an out gay man in which homosexuality has been a key ingredient to success, not something he needed to hide.

He hasn't always seen it that way, though. Below, a chat with Jordan about Pride, internalized homophobia and why he's ready to shed the "gay actor" addendum that often comes after his name.

I want to start with a deeply original and thought-out question: How is your Pride month going?

Well, I — my month has been pretty crazy. There's Pride all over the place. Pride's everywhere in June, which is wonderful, but it's a lot of, "Will he come here? Will he come here?" Let's do one big one, I decided, so there's one select hit. It's pretty chaotic having to just say no, but you don't want to spread yourself too thin even though you always want to be available.

I'm not calling you old, but you've seen a Pride or two. How has Pride changed for you, and, specifically, the meaning of Pride over the years?

I think that Pride has to come from within. We can all get together and celebrate, but if we don't, each of us, have our own Pride. That was my struggle early on, internalized homophobia. I didn't even really know, until I heard that word, that I — "Oh! That's me, that's me!" I had that. So I do remember that early on, Pride was a little quieter, and then it got real loud, and now it's where I think it should be. I would love for us to reach a point where we could say about our children, "I think he's going to be gay, I think she's going to be gay," the way we say, "Oh, I think she's going to be left handed." It's not necessarily something we want to shout from the mountains, it just is, it is.

You had a tremendous year on social media, I don't have to tell you, and now we're reemerging out into the world and I imagine you're seeing the impact of that out in the world now. What is that like for you, this new echelon of fame, if you will?

Well, it took me by surprise. I knew Instagram, but I didn't really know Instagram. I was in Tennessee and just kind of bored with my family, we then we had the lockdown and I thought, "Well, I'm gonna stay here," and then, you know, I started posting. And I think the reason people responded early on was that I would say things like, "This is awful! When is this going to be over? This is terrible. I'm feeling so lost."

Right, I think you were both saying the thing we were all thinking which provided a level of catharsis and you were making us laugh while doing so.

And now, it's gotten to the point, no matter where I go… I mean, I've had a little bit of fame all the way back to Will & Grace...

I was going to say, this is not brand new for you.

Yeah, but it was not on this level. Once you get to the Instagram, that kind of level, no matter where you go people know you. I never even thought about going into the Sky Club or wherever people go to wait for their flights. I just said, "I can't do that! I can't." But this love I feel from people, it's constant. They want to tell me stories about things. Anyway, it's all good. I don't ever want to be one of those that complains, "Oh, it's so hard to be famous!"

Back in the day fans might have been coming forward saying, "I loved your performance in XYZ," but the love that you're receiving now, they love you. It's a different kind of fame. What is that like for you to see people responding to you, not just your work as an actor, but falling in love with the person?

See, that's what I love about it. I had never thought of it in those terms. People would know me from Will & Grace or American Horror Story, and I thought, "You know what? They don't really know me, they know that character." I've always played, kind of, whatever I played. I've never really played me! And so nobody knows, really, me. So then when the whole Instagram thing started and it was just me, it was very gratifying to think, "Oh, wow. They love that." People would come up and say to me, "You helped me through it, you helped me through that."

Sordid Lives, Will & Grace, American Horror Story, Special. These are all movies or TV shows you've been a part of with gay creators, and I feel like what a joy it must be to have a career like yours and to be around gays: gay writers, gay creators, gay actors and getting to play gay characters. What has it been like for you, through so much of your career, to see homosexuality, not just your own, so embraced in the work you do?

Well, I remember I got to Hollywood in '82 and it was very wink-wink. I mean you know, come on, you would go to parties and as you said there would be the gay directors, the gay producers, gay this and that, but during the day we were very, not closeted, but it was different. And now it's more the way it should be. It just is.

You finally released your debut album, Company's Comin' in April, an album that features Dolly Parton and Eddie Vedder. What took you so long to venture into music?

Because honestly it never crossed my mind. Never. I started with my friend, Travis Howard, and we both grew up in a Baptist church, and we love those old hymns. He already had a kind of a little show on Instagram Live he would do. I hope I got that right, Instagram Live? And so then I would come on and we would sing those hymns. And all of the sudden we're in the recording studio with Dolly Parton. Everybody we asked, including Eddie Vedder, was a yes. You see the power of those old, old, old hymns. People will say, "I don't know this music," "I'm an atheist" or "I didn't grow up in the baptist church." But they're just wonderful old songs and I'm very proud of them.

What do you think it is about you, maybe your energy, that attracts people so much to you? I mean there's a reason why no one said no to being on this album when you asked them. And I imagine Dolly Parton is asked to be on a lot of projects and has to say no a lot. Have you ever thought about what quality that is that you possess?

I think because, in many ways, I'm very comfortable with myself. It's not always been this way, you know? This is something that I have achieved over the years, which, you know, even when I was uncomfortable with myself people were drawn to me. So, I don't know what that is. I'm very thankful that I have that kind of vibe people want to be around, because I've met people before that I've thought, "You're so off-putting."

I imagine in Hollywood especially!

Like, you were just born that way? Just off-putting? Are you acting?

I want to talk about your fashions. I loved your custom chain-stitch embroidered Fort Lonesome suit at the Country Music Awards and that on the red carpet you did a turn around to make sure it was captured from behind. Talk to me about your fashion sense and what gets your eye excited?

One of the stylists, and I can't remember everybody's names, let's just say a stylist brought it, and I just said, "Oh, my god!" Because that's not really my style, I wouldn't wear that, I don't think. But it was embroidery, it was just so beautiful. And I asked them if I could have that gold one and they said, "No, I'm sorry." It was a sentimental thing, like, I need one. They said, "We'll have one made and we're going to go with blue instead of gold." So I have a blue one now!

Who are the LGBTQ+ stars that you have your eye on? Are there any actors or performers that you've crossed paths with?

I'm such a recluse. I don't watch television, I don't get out a whole lot, and I don't, when I do get out, I'm too self-centered.

Goals! We're at this time right now where Pride is suddenly back, the world is opening up again, we're seeing more representation for LGBTQ in the media, the first trans athlete is going to the Olympics coming up, and the NFL has their first active gay player in the leagues, there's just so much happening right now by way of representation. What do you want to see happen next? Or what are you hopeful for with regards to the movement?