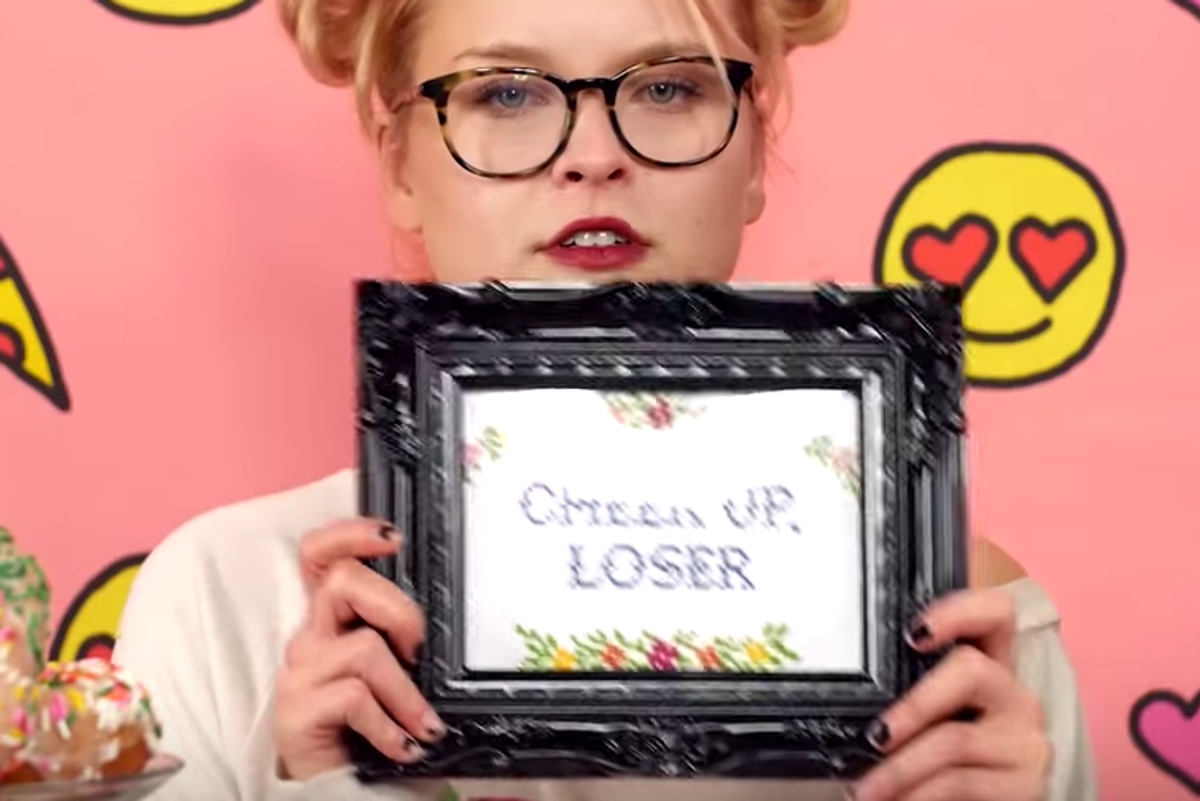 Lauren Rantala: The Trials of a Teenage Grim Reaper (and Her Creator)

Lauren Rantala is a mouthpiece — covered in Lisa Frank stickers and boy band posters — for adults with tween tendencies. The writer, comic, artist, and producer won Best Animated Project at the New York Television Festival this year for her short, Tiffany The Teenage Grim Reaper. We chatted with her about growing up as a nihilistic pop-culture devotee in a Christian community, looking to Beyoncé for guidance, and finding solace online.

Tiffany the Teenage Grim Reaper is the realest portrayal of a teenage girl that I've seen in a long time, cartoon or otherwise. Why did you decide to use death to portray the experience of a high school girl?

I grew up in a very conservative, traditional Christian community in the south. My family, school, friends, and environment as a whole was very religious. I was too scared to ever say out loud that I didn't share their beliefs. So I kept my mouth shut for a very long time. I was still my outgoing, silly self — just hyper aware of death and holding nihilistic views about the traditional Christian community. In one breath I was reminding everyone of their own mortality, but in the next I was asking who had heard the new Bieber. Recounting this years later in a Nashville bar I was working at (RIP Stone Fox), I referred to my old self as a "Teenage Grim Reaper." A light bulb went off in my head and Tiffany was born.

Tiffany's details are impeccable. Her "Lisa Dank" backpack, the Smiths poster, the Sylvia Plath bedsheets. Even in your non-animated Ask Us series you're surrounded by sprinkled donuts, lava lamps, and action figures. Why do you think creating this visual context is important?

I love finding easter eggs in comics/cartoons. It's a fun way to connect with the audience on another, more personal level. It's like having inside jokes with complete strangers. I always appreciate when I spot little details like that in other people's work. If you're someone like me who has to watch a TV show five times before you feel like you've really seen it, I want to make sure it's worth your time. Live Action details are harder to curate, but so fun to collect. It's exciting to act as your own art department and bring in trinkets from home. I always made sure my little Beatrix Kiddo statue was right there by my side on every Ask Us shoot.

Are there any specific comics or artists that you look to for guidance?

So many — a huge inspiration for me has been Brad Neely. He made me realize I didn't have to know the entire Adobe suite to make an animated series. He made the whole process seem doable. Kate Leth was also a big help for me in the beginning when I was only drawing comics. The fact that she made a career out of doing something she loved while being so young was amazing to me. Kelly Sue DeConnick, author of Bitch Planet made me realize that by having this platform, I had a medium to work with for social change. She really lit a fire in my belly to go full force into the male dominated space of animated series.

When I'm working I always have a show running in the background. Lately it has been a lot of Lady Dynamite courtesy of the amazing Maria Bamford and a ton of Boy Meets World marathons. I'll go for hours at a time without leaving my desk and end up in kind of a meditative state. It took a really long time to develop the work ethic I have now, but Beyoncé has been a huge inspiration to me on that front. Apparently she'll go for days at a time not eating, sleeping, or using the restroom all because she is too busy throwing herself into a project. To me, that's a super power. And whenever I hit a wall, I always think of her line in "Freedom" [off Lemonade]: "A winner don't quit on themselves."

Your work deals with growing up and navigating the world in our digital age. How do you think this environment affects tweens and young adults?

Honestly I wish I had the digital community that is available now when I was growing up. In today's era if you don't fit in within your hometown, there is a community online you can relate to. I feel very fortunate to know many of the people creating the content that kids are watching now. They are all badass, creative, forward thinking individuals. Not only that, but the youth is the biggest influence on Internet culture. The next generation isn't only the future, they're the now. They're the ones dictating what's trending on twitter and what the next big platform will be.

How do you think being a tween affected your art?

All my life I never quite fit in with any circle of friends or tight knit community. I used to think there was something wrong with me- that I was bad and didn't deserve to belong like that. But now, as an adult I have realized that I'm no better or worse than anyone else. I'm just very different. And being very different is what's made my art what it is. Had I been invited to parties my whole life, I wouldn't have drawn so much. Had I been able to express myself "normally," I never would have started making comics. Had I not been rejected by my childhood community, I wouldn't be so passionate about creating it for others. Life is hard; but if it was easy, we would all be dicks and art would suck.

Have you ever felt stifled as a female artist or pigeonholed into a "funny woman" category?

On the contrary, I feel empowered by my female perspective. I'm also really lucky to know a lot of hysterical women who motivate and inspire me daily. The women in the comedy community are some of the most insightful, caring people I've ever met. If you ever need a laugh, I highly recommend you follow @madison_shepard, @kaseykoop, @itsanimatedtext, @mostlypregnant, @nesgritton, @justaboutglad.

"Love Me Tinder" is a feminist anthem, and your "Quarter Life Crisis" videos about birth control options and anxiety should be TV-broadcasted PSAs. How do you think people can utilize art and the Internet as a positive tool like you have? Is there anything you think people should stop doing?

I think modern social revolution is largely spurred by and through the Internet. It encourages me so much when I see people utilizing the Internet as a megaphone for intersectional feminism as many artists do. The only thing I don't like about the Internet is the tolerance of hate groups, but it does seem to be slowly getting better. I was very relieved to see twitter revoke Richard Spencer's verification status on moral principles.

Is there anything you'd like to add about yourself, your work, or the landscape it exists in?

I'm really excited for the future of comedy. There are so many women are coming up and I feel very grateful to be present for it! The only thing more I'd say is if you have a creative passion, pursue it fiercely and focus on the positives.