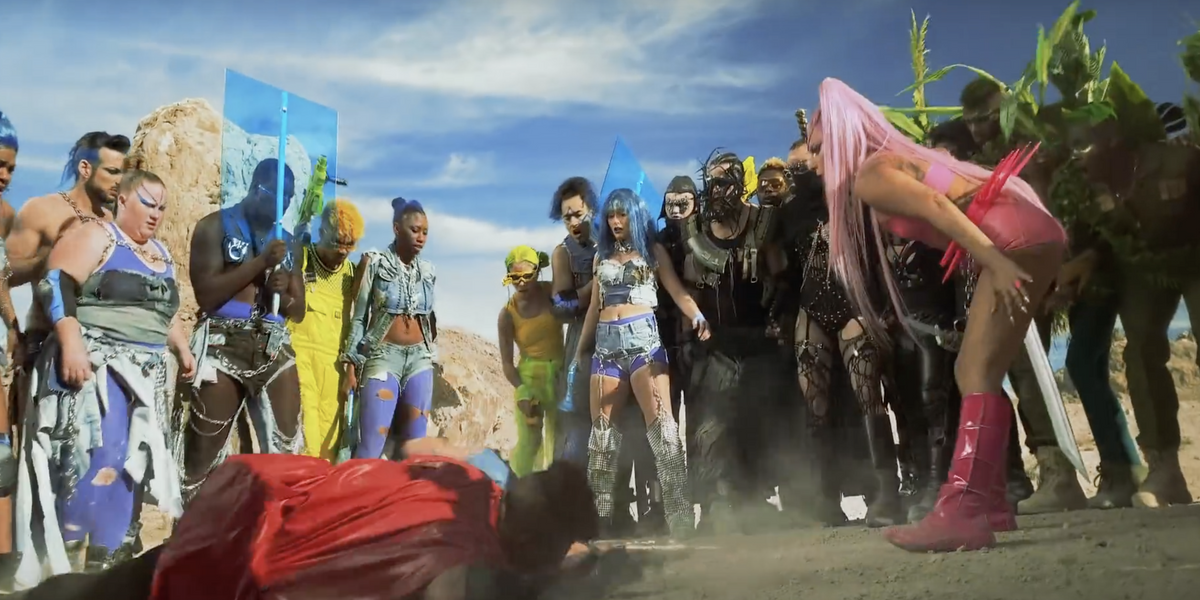 After listening to Lady Gaga's comeback single, "Stupid Love," for the very first time ever this morning, I immediately had to check out the accompanying video in hopes of a return to the artist's "Bad Romance"-era choreography and ARTPOP levels of camp. I wasn't disappointed — the video is a dystopian Pride tea dance, with warring Mad Max-like tribes who are more likely to be fighting over Haus Beauty samples than drinking water.

Watching the video for "Stupid Love" is like being transported right back to the days of rah-rah's and "disco sticks," and the fearless choreography literally compels you to dance along. Surely every drag queen in the world will have the dance break memorized by this evening's shows; each shoulder pop and arm twirl is infectious, meticulously constructed by Gaga's longtime choreographer Richard Jackson.

Aside from killer choreog, a prevailing motif in the visual is CHROMATICA, which fans believe to be the title of Gaga's forthcoming album. It would be a fitting one, considering that "Stupid Love" contains a rainbow of dancers, the kind of color and vibrancy that we haven't seen in years from Gaga. Her poignant starring role in A Star Is Born marked an era of melancholy ballad performances, muted palettes and somber tones — now she's all about being bright again.

While there is unrest, towards the end of a video Gaga stops a fight between the "kindness punks" and "spiritual ones."
Eventually a multi-colored flash mob breaks out, with the entire cast returning to peace against a rocky backdrop. At least we can rest easy until the album drops knowing that all is well at the Gaga-ruled martian circuit party. Now, stream "Stupid Love" like you've never heard it before!