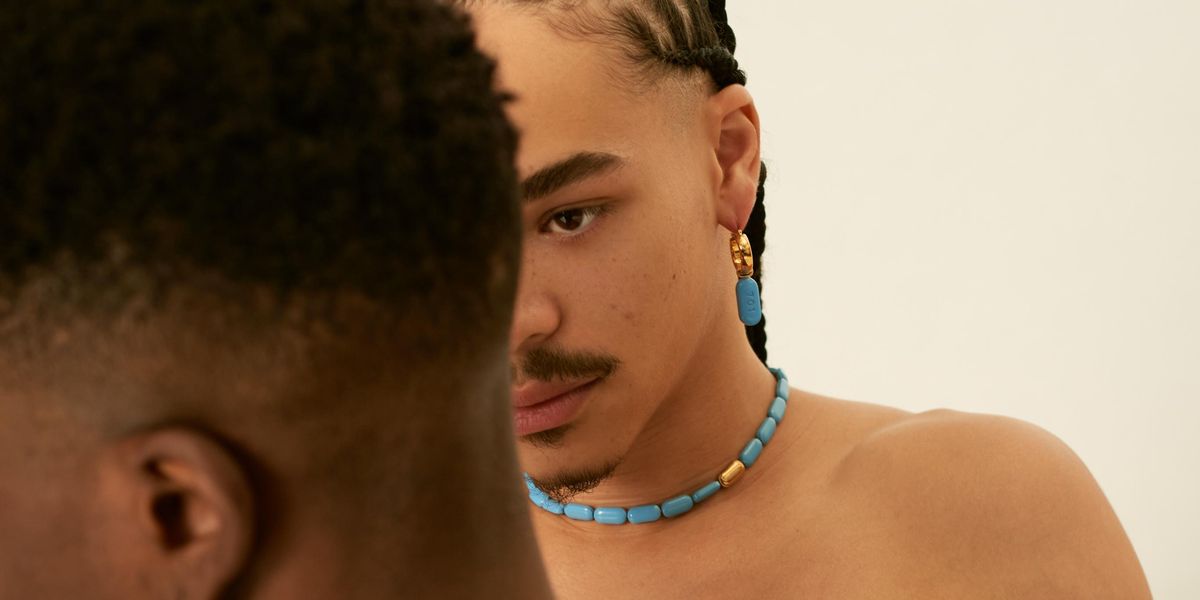 Things are very different now from when PAPER first sat down seven months ago with Kingsley Gbadegesin (of K.NGSLEY). Then, the designer's sexy renditions of tank tops seemed to only be an extended quarantine project with no clue of where it would land on the spectrum of success.

Now, K.NGSLEY is everywhere. "It's become an 'us' thing," the designer says, referring to the way his tanks have quickly become a signal for queer people — like, how Levi's shorts and mustaches signaled queerness during the '60s or '70s.

Now, as icons like Bretman Rock continue to don his sultry creations, Gbadegesin is taking it a step further with a fine jewelry line celebrating safe sex in the LGBTQ+ community.

The connection between the two is immediately clear. Fine Italian-made drop earrings and necklaces are coated in gold or silver. The shape of the pendants? That signature PrEP pill, the prescribed medicine used to prevent HIV (and is now free under almost all insurance plans). Some styles make it even more obvious with the all-too-familiar blue color.

Related | How to Start a Fashion Label During a Pandemic

"I've worn the prototype for a while now," Gbadegesin says, "and, it's the funniest thing because a random gay or queer person sees it and comes up to me and asks, 'Is that...? Yeah.'"

While the line is certainly a cheeky add-on to the already very queer brand, it's more than just a playful aesthetic. "There's a large disparity, and Black and Brown queer people are significantly more affected by HIV than our white counterparts," Gbadegesin says, underscoring CDC research that shows how Black gay and bisexual men have the highest number of HIV diagnoses.

The designer adds how this issue became more real when someone he knows personally revealed that they had contracted HIV. "This person is so young and so full of life," he says, "and he's going to continue to be that way thank god, but it still hits home."

Below, Gbadegesin reconnects with PAPER over his new jewelry line, how far he's come and the desire to bring safe sex into the spotlight. "With this platform that I now have, it's a social responsibility," he says. "I want us here. I want you to get your back blown out or blow someone else's. But have the facts and resources to keep you safe while doing it."

You spoke to PAPER in December. Six months later, what growth have you experienced both personally and with your brand?

So much has happened since we last spoke — so many things I dreamed of have become reality. It's been non-stop and I'm at it almost every day of the week. So much has been accomplished: K.NGSLEY is now on racks in Nordstrom, we've launched our first jewelry line and much more. And while I'm proud of all that has been realized, I am still learning to manage my own expectations and learning that I need to find new ways to manage my energy, such as by setting time aside for myself. I am one person, and I know I'll only grasp what I'm reaching for if I take care of myself and my heart and stay grounded in why I started this journey in the first place.

What made you want to start the jewelry line? And what was the design process like?

Since we launched, there has been a thirst for more K.NGSLEY from stylists, clients and stockists. We played around with what this more could be and landed on Jewelry. I got to collaborate with one of the best jewelry designers, K.L., on this launch. I knew that whatever it would be, it would have to be something that captures the same spirit of the tanks — chic, classic with a twist.

We threw many ideas around and landed on PrEP. The moment we came up with the idea, we just ran with it. There was no denying the energy we felt in the process. We tried our best to mimic the color, because we noticed that the color is distinctively known in our community. As queer people who take the pill, it's an insider and the new way to say, "I'm on PrEP," without saying it.

In the traditional luxury jewelry sphere, your line could be interpreted as provocative. What do you say about that?

Is this line provocative or is the luxury jewelry sphere out of touch with reality? If someone thinks this line is provocative, I'd challenge the hell out of that. If it makes them uncomfortable, I invite them to reflect on that and articulate why. It's not on me to make them comfortable or feel better about any of this.

The jewelry brand is a nod to safe sex/HIV awareness. Why is this important for the community?

Queer people of color are at higher risk for HIV/AIDS and have long been oppressed when it comes to our health care. We don't learn about it in schools and we often lack full access to it in our adult lives. Starting this line is a middle finger to all that. The "701" series is a call to action and an act of resistance — and more than that, it's a celebration of showing up for ourselves.

Why is it important to you?

This brand was born of activism and the club scene — by the girls, for the girls. And we've got to look out for each other. It's important to me because queer people everywhere need to look out for each other. If you are queer, femme, Black, trans, I see you and care so fucking much about you. I care about your health, your safety, your future. This is a statement — another love letter to the community I love.

As someone who is well-versed in the LGBTQ+ community, how have you seen stigma be destructive in your own or other's personal lives?

To be queer, Black and femme in this world is to know this intimately. Being called a "faggot," "sissy" or "punk." Disregarded as "other." It's not only violence done to us, it's a mindset that can get inside and eat at you from the inside. This entire project is something I used to begin to fight that — to exorcise all that from my past. And I hope it brings a measure of confidence to girls everywhere.

Why is the conversation about sex positivity and safe sex important now?

It's as important now as it ever has been — as it has been for decades. But we're emerging from a once-in-a-generation pandemic. We've all heard about how people are ready to get back on the scene and have a wild summer. And as we all find our ways back to each other, in celebration of our bodies, our identities, it's important that we ensure our sexual liberation is unbounded and that we protect ourselves while we embrace the joy in who we are.

Do you think the LGBTQ+ community is doing better in pushing that conversation?

I do. We've got a long way to go, but I am optimistic it's getting better. I believe we need to realize that the goal is not for queer people to fit into and be respected in our heteronormative society. The goal is for us to exist in a society that is made for us, by us. And that requires a subversion of the current social structures and norms. Until queer people, especially our white folks, are willing to reject the comforts and safety of the norms they rest in, sexually and otherwise, we will never be free.