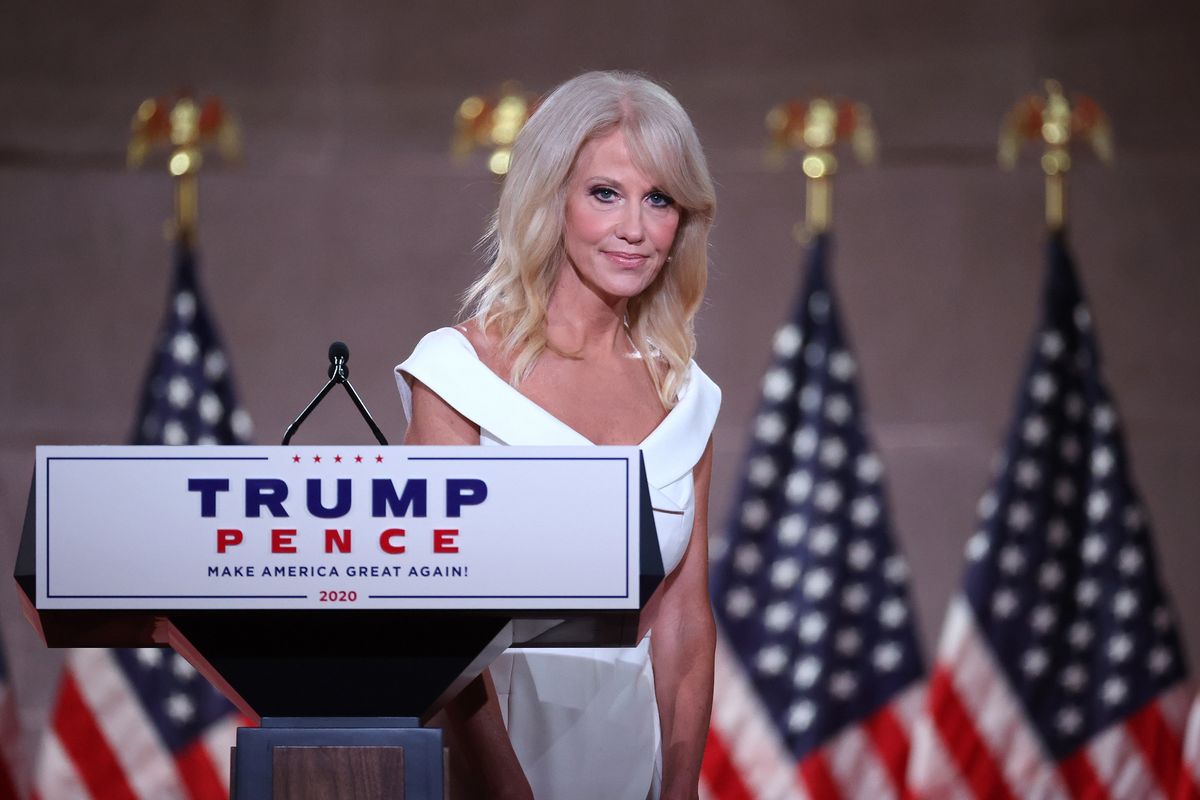 Former counselor to former President Trump, Kellyanne Conway is accused of tweeting out a topless photo of her daughter, Claudia, Monday night. According to screenshots taken and circulated by users, a topless photo of the 16 year-old teen was posted by Kellyanne's account as a Twitter Fleet before it was deleted.

After having been alerted by her fans that the photo had been posted, Claudia Conway posted videos on TikTok, which have since been deleted, confirming that the photo was real and urged her followers to report anyone they saw reposting it. "I'm assuming my mom took a picture of it to use against me one day and then somebody hacked her or something," she said. "I'm literally at a loss for words." Writing in Morse code, Claudia went on to further say in the comments "Please get people to talk about this," and "I'm okay but scared af spread awareness pls."

Kellyanne Conway posted her minor daughters nudes. Let's talk about why tf those were on her phone to begin with, o… https://t.co/wf7UkWLOMn
— Charli (@Charli)1611636983.0

Later on that Monday night, YouTuber Tana Mongeau went live on Instagram broadcasting a FaceTime call between her and Claudia. Amid Mongeau's rolling commentary, Kellyanne, Claudia and a police officer can clearly be heard arguing in the background with Kellyanne calling Claudia "a phone addict" and "mentally ill" as well as claiming that her daughter's posts are somehow putting her safety at risk. Kellyanne goes on to flatly dismiss Claudia's version of events, saying,"You're wrong. It is nowhere. They don't see it. You don't see it. It is nowhere. You're making this up to be a big shot."

The two also make reference to a TikTok Claudia previously shared that allegedly shows Kellyanne verbally and physically assaulting her which seems to have led to Child Protective Services being called. In the comments of that video, Claudia wrote, "they do nothing. She's way too powerful."

After the whole exchange Monday night, Claudia Conway allegedly replaced her bio with just a countdown to the day she turns 18 but that too has since been replaced with just a link to a McSweeney's article detailing the many horrors committed by the Trump administration. Following a great deal of concern that was expressed over social media, Claudia issued a statement via her TikTok announcing that she believes her mother wasn't responsible for the photo getting posted, urging her followers to not send hate to her family or continue to call the cops on them and that she would be taking a break from social media for the time being.

Our daughter Claudia asked me to tweet this statement for her. https://t.co/ilH7IFqERB
— George Conway (@George Conway)1611677199.0

Claudia Conway has been previously outspoken about her mother and her role in the Trump administration. Last August, Claudia announced that she was pursuing emancipation from her parents around the time that Kellyanne announced her own formal departure from the White House. Following last Fall's Supreme Court Nomination announcement/ superspreader event at the White House, Claudia was one of the first to report that Kellyanne had contracted COVID-19 and a few days later would confirm that her mom had given it to her as well. This was followed by a series of deleted TikToks where the two can be seen arguing and Kellyanne demanding that Claudia tell her followers that her mom had "three COVID tests" following the event.

According to the New York Post, an official investigation into the topless photo of Claudia Conway posted to her mother's Twitter account is being conducted by Bergen County Police. Details regarding cases that involve juveniles are not made public, so they have declined to provide any additional information.