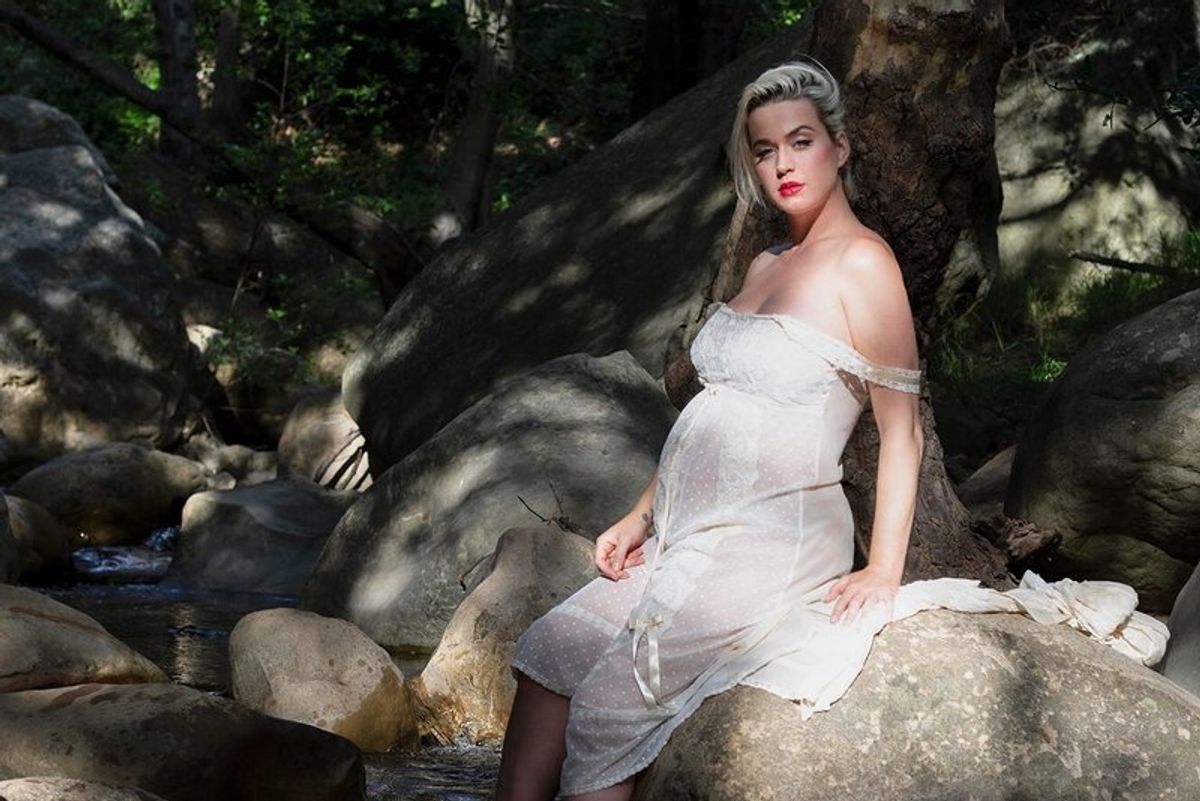 Happy Friday! Katy Perry has a nice new single for us. As a treat. It's a sweet acoustic guitar-driven pop song called "Daisies" about personal resilience and not losing your sense of child-like wonder — which, say what you will about Perry, she never has. The California gurls' dream of riding a motorcycle around Hawaii and getting heartbreak treatment at a pastel hippie cult lives on inside her mind and music videos. This one's the first single off her yet-untitled fifth album, reportedly due August 14.

Perry's gorgeous, utterly out-of-touch romanticism (which is to be protected at all costs) is on fine display in the "Daisies" music video. Still, it's an unusually minimalist visual for Perry, perhaps because it's social-distance friendly. A seven-months-pregnant, white linen-clad Perry frolics alone in a field of the titular flora, veiled in a blurry 16mm film effect like a 500 Days of Summer deleted scene. She strips down baring her impressive baby bump to go skinny dipping in a forest creek. I'm not sure what her request to "cover me in daisies" means, but it hits "Roar" levels when she sings it standing, white gown a-flowing on top of a mountain! I like to think of Orlando Bloom behind the scenes dabbing her forehead.

"I wrote this song a couple months ago as a call to remain true to the course you've set for yourself, regardless of what others may think," Perry wrote on Instagram. "Recently, it has taken a new meaning for me, in light of what the whole world is experiencing."

Perry has been having a nice time in quar, it seems: watching PAPER fave JT Firstman's comedy videos, growing her costume collection and practicing being mom with Bloom's nine-year-old Flynn. The couple is reportedly due sometime in August, around the time her new album drops. Perry has been consistently dropping non-album singles since 2017's Witness, from "365," to "Harleys in Hawaii" to "Never Worn White" to "Small Talk," to the underrated bop "Never Really Over." They've been… inconsistent but nonetheless provide much to be excited for with KP5.