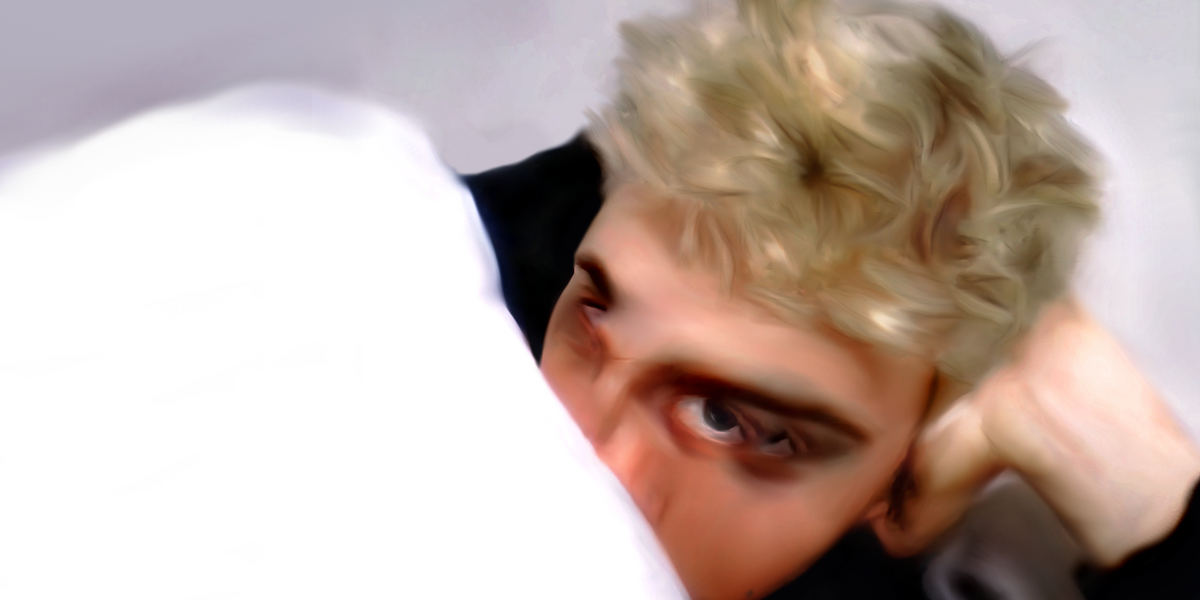 British producer Kai Whiston's unique brand of music is the sort that lends itself well to an array of colorful metaphors; like Aphex Twin and Lex Luger had a bastard child that exclusively listened to grime, like scrambled vision of an apocalyptic future run by robots being downloaded directly into your consciousness, like a bunch of forks and an entire cartoon studio were thrown in a garbage disposal. Whiston makes certifiably insane beats that on paper shouldn't work at all but somehow end up going so unbelievably hard.

Whiston's new album, the semi-self-titled, Kai Whiston Bitch, is the kind of release that might have flown under your radar but will be kicking yourself about not hearing about it sooner. From the very first crashing drop on the album's opening track "All Is Fair In Love And Kai Whiston," (which I like to think is a nod to Skrillex's own album opener "All Is Fair In Love And Brostep," itself a riff on the oft quoted John Lyly proverb) sets the tone for unpredictable roller-coaster ride through warped world of razor sharp experimental club.

Designing intricate trap and grimes with occasional touches of Baile and deconstructed club thrown in, the album relentlessly pummels the listener constantly shifting from one thing to the next. The few moments that Whiston lets the listener come up for air are actually probably some of its most underrated strengths. From the opener's gauzy waves of ambient synth being suddenly torn open or the almost Radiohead-like guitar melody that steadily grows more glitched out and distorted in the latter half of "For Fuck Sake," getting a moment to step back and appreciate the orchestrated chaos. .

Best likened to fellow British producer, and Whiston's longtime close friend, Iglooghost, the two share a "more is more" approach to production that has caught the attention of well respected labels like Brainfeeder and Houndstooth. Now formally teaming up, Kai Whiston Bitch will be the first release of Iglooghost's new creative venture GLOO, a loosely defined creative outlet for both artists.

We caught up with Kai Whiston to talk about his debut album, GLOO, and more:

Why was now the right time to release an album?

​I had been weirdly getting into these circles with big rappers and shit for the past year. I was super good socially and chatting shit via email but they had no fucking clue what was going on when it came to the music. Rick Ross's team were managing me for a little bit just because they thought I was a good kid, but I quickly realized that shit wasn't for me. I'm always learning everyday so I guess it took this long for it all to make coherent sense. Having the luxury of not needing to pay rent every living moment definitely opened up more time for experimentation and studying music to make my M.O. as clear as possible. Also I went to prison for a bit which was fucking annoying.

What was the inspiration/thought process behind the album?

As of right now I base all my work (visual, sound etc.) on my muse, Kai Whiston. I think it's fairly typical of young artists to make a lot of self-referential work and to have a lot of fun causing mischief. I saw some shit from a David Rudnick lecture on YouTube the other day where he played an action scene from that Batman vs Superman film of the camera making all these surreal hyperspeed movements following the characters that was totally abstract from any other human perspective. He said something to the effect of "This is the end of linear time. This is what the new generation of artists are surrounded by" which hit the nail right on the fucking head. I think what was past saw as 'surrealist' & 'maximal' gestures, spanning all materials, is now totally normal to a lot of young people. The threshold level of indulgence has fucking skyrocketed. Do you feel me?

How did you go about organizing the album? Your sound is characteristically all over the place, moving from one thing to the next. Did you have to reign that in or change your typical approach?

I guess listening back to the album I hear something different to everyone else. All I can hear is the excruciating amount of restraint I had to put into everything. It took a lot to turn down my ugliest, grossest desires and create a product suitable for human consumption. The most important part of the whole process was at the end where I had these fucking horrible demos of essentially sound wank and tried to make them into clever songs. The best habit I have is to try and do as much as I can on my own. Everything down to the samples, engineering, art direction, writing etc. etc. I think inherently that always makes something with my footprint. My dickheadery selfishness is definitely my worst trait but I think that's what makes my shit sound amazing.

Kinda. While I definitely don't have a whole movie in my head like Iglooghost or something, there's totally a method to it all. My shit is almost like, a study of music or something. I try and flow things together by the references I paint within the tracks. While I think there's consistent themes through the whole album, I wanted each song to have its own individuality to it. I think there's a general four-moments-per-album formula and I just wanted to fuck all of that up. I wanted every track to be its own moment and have them all as interesting as each other. It should make sense if you stare at the album cover while you listen to the whole thing.

You and Iglooghost seem to go back a ways, how did being the first to release on his new imprint, GLOO, come about?

I think there's some kinda press release fueled Chinese whispers going around about the GLOO shit. The definition is intentionally vague but it's not so much an imprint or label or distribution or anything. I guess you could say it's like an umbrella term that we use for things of product variety. Think like, Donda by Kanye but just fun creative shit. If Iglooghost decides he wants to build and sell furniture, he'll do it under GLOO. If I wanna sponsor a wrestling tournament, I'll do it under GLOO. We dropping some clothes and shit soon. And yeah I'm pretty inseparable from that cunt, we've been boys since I was 15 and we're huge fans of each other. There's so much shit that has to be protected of the Iglooghost brand though. We go out very intoxicated and take off our clothes at shitty nightclubs, so we are banned from most establishments where I live. We fuck up so much shit. He's just as KWB as I am. I seen this cunt last weekend tell a bouncer he was gonna call the police on him because he asked us leave. He was so fucking serious.

For a long time at the start I was eager to send shit to labels and to have someone put it out. My attitude towards that completely changed over the course of making it, and ideas just started to open up from there. I think taking away that focus from your life would be my best advice to young artists. From a growth point of view, we're in a culture of cosigns. I think a lot of people need to throw the "networking" shit out the window and bond with people that are like minded to you and that you can learn from. I get people tryna hang out with me that are clearly asking for shit from me. The reduction in transactional relationships is very much needed when everything's getting fucked in the bum by the biz (kinda hot). Other than that, I'm extremely clever so I knew what I was doing the whole time.

You seem very visually driven with your projects. I know Sam Rolfes and you are frequent collaborators which seems pretty fitting, but I'm curious as to what you see your relationship to your visual output as? How did you approach the visuals for this album?

I scrapped my whole elaborate art shit like two weeks before the first single came out. I had a super elaborate rollout and decided to masochistically rework everything last minute (one of the many pleasures of not having a label to answer to). I originally wanted to do the nu-renaissance shit for my next album and just felt the omnipotent god vibes were better suited for this one. Sam really did wonders for me in kick starting my visual shit. I always had a general interest in art before music, but really felt uninterested in a lot of what I was discovering until Sam's work hit me. The references he pulls from are so close to a lot of things I am passionate about - he has impeccable taste. I really idolized the guy before ever working with him, and our discussions brought forward a lot of self-discovery type shit. I can't wait for the next opportunity to work together - he definitely needs more sleep though. Shout-out to Andy and the rest of the Team Rolfes gang. All those mocap suits are making y'all look really dumb, many people tell me they think all of you are massive losers

Where does "Kai Whiston Bitch" come from?

"Kai Whiston Bitch" initially was just a dumb idea for a producer tag that I would use before drops and spam during my DJ sets. I guess it kinda got stuck in peoples heads and became a nickname with my mates. They would call me KWB when I would be doing my socially irresponsible hedonism type shit. My album was originally self-titled and thought it would be fucking funny to call my album that instead. So much more meaning has evolved from it since then but that's where it originates from. People love screaming that shit to me. For some reason its this invitation for young boys to insult me on the internet its so fucking strange. Also to be extremely clear, using "Bitch" in any other setting that is meant to put someone else down is not cool at all and makes you look like a fucking bellend.

What do you hope people take away from listening to the album?

​I'm kinda unconcerned with what people take away from it. I feel that it's designed to be confrontational, so I'd be confused with the people that sit on the fence with it. I could drivel on endlessly about how I want to be recognized as a compelling artist but really I don't give a fuck anymore. I know some kids will find this shit and something crazy will happen.

What does the future hold for Kai Whiston?

I'm studying this dogshit marketing degree at at the moment until I make my millions. I want to really refine my visual work to contest my music, so my Google Drive is looking crazy. I've just turned up the live show a couple hundred notches so that will be fun. Music will make its way in the timeline occasionally, I have this general expectation that music will be a small factor in the overarching Kai Whiston story. Millennials are so fucked.

Kai Whiston Bitch is out now on all platforms.