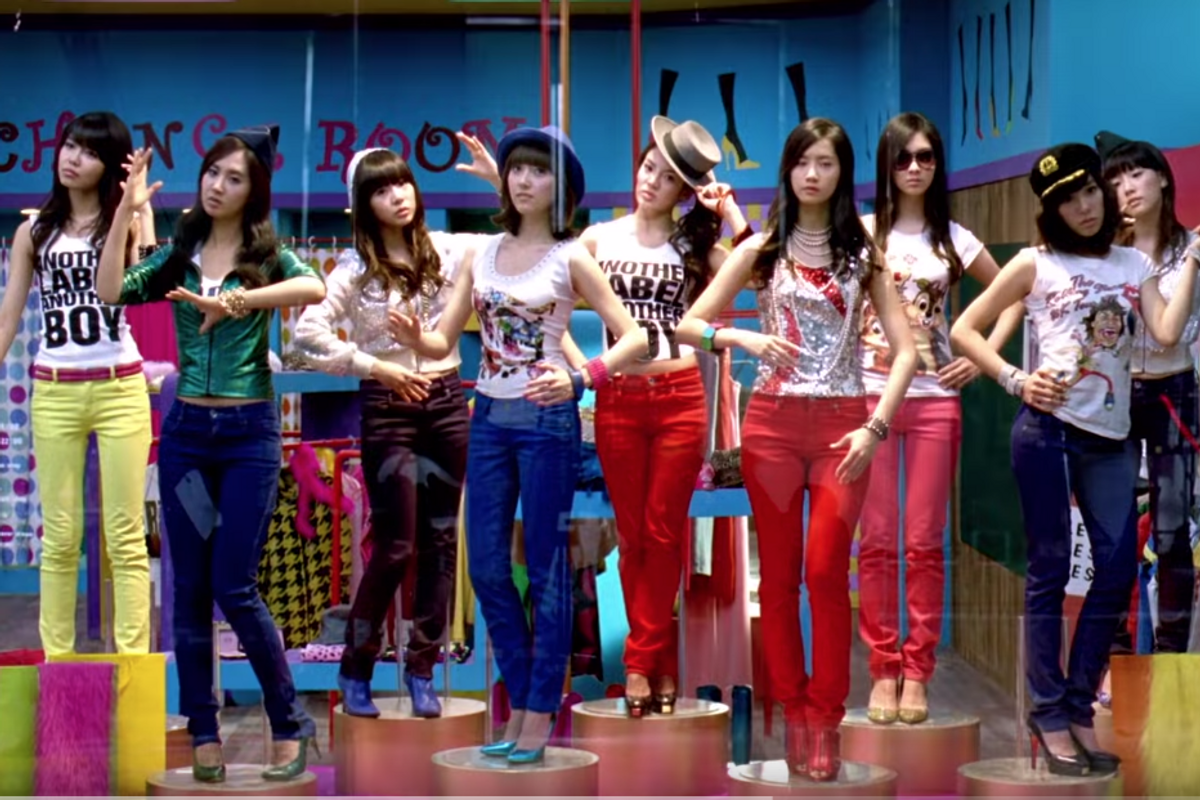 The ABC's of K-Pop

For our new digital cover series Takeover, we chose five of our favorite women who're making a significant impact on the music industry right now. Tiffany Young, the breakout singer of K-pop group Girls Generation, is carving out a major name for herself stateside. Today, she'll be taking over PAPER with guest edited pieces and answering fans' questions on our Instagram.

The Hits That Made K-Pop Go Global

"Nobody" by Wonder Girls: This single shook the music world back in 2009, and was the first song to truly put K-Pop on the world stage. People clapped, snapped, danced, and sang along to the song's English chorus. And not long after its release, the song was already available on karaoke.

"Lollipop" by 2NE1 and Big Bang: Cellphone commercials were, and still are, a big deal in South Korea. K-Pop artists would shoot ads for phones, particularly from tech giant LG, like it was a full-on music video. Songs like "Lollipop" went viral all over Asia, garnering millions of views.

"Gee" by So Nyu Shi Dae/Girls' Generation: One of the best demonstrations of extremely well-synced large K-Pop groups was SNSD or Girls Generation's hit single "Gee." The infectious tune, along with the video's super cute dance moves, made all the girl gangs want to master the art of dancing in heels and bright skinny jeans.

"Sorry Sorry" by Super Junior: Super Junior has a roster of 13 members, which is why it's so amazing — and slightly overwhelming — when you see them dance in videos like "Sorry Sorry." But, of course, who can complain with the guys dancing and looking F-I-N-E (well, by 2009 standards).

"Fantastic Baby" by Big Bang: This certified 2012 banger made its rounds in clubs and bars everywhere. It's an irresistibly danceable party bop from that goes beyond basic EDM. And the video's dystopian vision — also G-Dragon's hair — definitely looks like a peak into the future.

The Labels That Made the Stars

Four major commercial labels dominate the K-Pop scene, training and producing some of the finest groups known in the industry.

K-Pop Bands/Artists You Should Know (Aside From BTS)

Although Tiffany and a couple of other members of the nine-member girl group have gone on to pursue solo endeavors, GG is still well and alive!

Since leaving the Wonder Girls, HyunA's had huge success as a solo artist and collaborator. Her super sexy persona, moves, and sound will definitely seduce you.

F(x) is known for their ultramodern, futuristic, hip-hop-ish style—an alternative to the super sweet music and style other girl groups put out there. Although they haven't been active in recent years, Amber Liu has recently collaborated on a song with duo Super Fruit.

All members of SHINEE have amazing vocals, moves, and fashion senses, which is why they earned the title "Princes of K-Pop." They used to be a five-piece group, but their main vocalist Jonghyun passed away in December 2017. Still, they continue to make great music.

Among the sadly disbanded OG K-Pop girl groups is 2NE1. Before their leader CL/ Chae Rin Lee went to the US and debuted as a solo artist, the band was known for its diversity in musical style, and the four distinct personalities in the group: CL, Dara, Bom, and Minzy.

Big Bang is a band that has survived the test of time and solo breakouts. While all of its members—T.O.P., G-Dragon, Taeyang, Seungri, and Daesung—enjoy successful solo careers, they all still come together to make hits as a group.

This nine-member boy band has Korean and Chinese members, and performs in both Korean and Mandarin. The initially 12 member band divided into two sub-groups: Exo-K (Suho, Baekhyun, Chanyeol, D.O., Kai, and Sehun) and Exo-M (Xiumin, Lay, Chen, and former members Kris, Luhan, and Tao). They're known for their killer rap breaks—so if you like BTS, you'll like their music for sure.

BLACKPINK is one of the latest girl groups to make a splash in the K-Pop scene. YG Entertainment debuted Jisoo, Jennie, Lisa, and Rosé in 2016, and since then they've been the highest-charting female K-pop act on the Billboard Hot 100 with their single "Ddu-Du Ddu-Du."

They may not be part of any of the "Big Three" labels, but Momoland has made a name for itself. The group was formed from a reality TV series called Finding Momoland. The seven winners Hyebin, Yeonwoo, Jane, Nayun, JooE, Ahin, and Nancy debuted in 2016.

One of the biggest, most recent successes in K-Pop is Red Velvet. The group popped up with their electrifying music in 2014 and shocked the Korean music industry. They've even been featured in hit Korean Dramas like Descendants of the Sun.