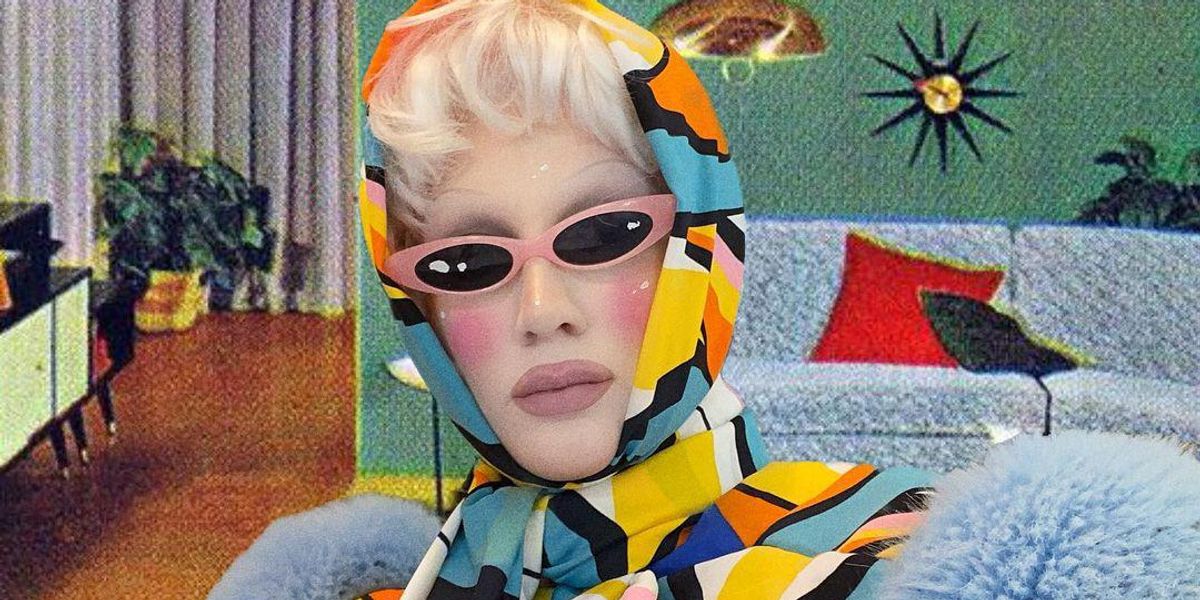 Juno Birch is a self-declared "alien who crash landed to earth in 1962." She lives happy in Manchester, England, where she amuses herself by doing drag, making sculptures and (almost) passing for human. Birch is known for her otherworldly pastel skin tones, which run the gamut from lavender to blue to pink, and her outer space bouffant hairstyles. PAPER spoke to Birch about drag and her insider knowledge of the aliens among us.

Have you always believed in aliens?

Absolutely. Well, before I started doing drag, I just drew a lot of aliens. I was always interested in that scene. I wrote a story ages ago about a little boy going to a salon with his mom, and he's convinced all of the women in the salon are aliens because they all have massive hair and sunglasses. They're all disguised as human. And that concept from when I was in college has just run through my drag really and just evolves. It's also a little bit of personal pride, because obviously being a medically transitioned trans woman is often like, I'm not biologically female, I'm not male. I'm a bit of an alien, in between. That's something that resonates with my drag quite a lot. But at the same time, I don't take anything seriously. So it's all about humor and taking the piss.

I was watching your YouTube videos, and you were saying how sometimes people misgender you in the comments and you said, "If you mistakenly misgender me, I don't really care. It's all good." And I thought that was an interesting and forgiving take because often people can be very sensitive about that.

When I think of my whole life until I started doing drag, I was trying to fit into normal society and pass as a straight woman and biologically female. When I had my surgery and I was happy with my body, I just felt like I didn't do that anymore. I let myself go a lot. I didn't put on a high-pitched voice anymore. I had a kind of "I don't give a fuck" attitude. Obviously because of Drag Race, people assume that you're a man in drag all the time. It doesn't really bother me, like, I just don't really care.

If you look at the stylings of women in the 1960s, they actually look like aliens. And it's like Men in Black where they're disguised as a human. It's all disconnected from modern culture. If you look at these tiny little sunglasses and the big beehives, they literally just look like typical green aliens. And also, I think in the '60s, everything was absolutely gorgeous colors. I just love everything.

Me too. Have you thought about where in the galaxy Juno Birch is from?

No, I don't disclose any information whatsoever. That's all top secret. I have that Mr. Bean element. Do you know Mr. Bean?

I do. My parents love Mr. Bean.

Rowan Atkinson on the TV series drops out from the sky and they insinuate that he's an alien. He doesn't really know what he's doing. But there's never any mention about where he comes from. And what his purpose is. I really, really like that.

People are always intrigued more. They want to ask more questions. I think it's important not to give away too much about yourself straight away.

It's very easy to tell everything. It's harder to maintain some mystery. I love that you talk about one of your inspirations being the Muppets. Do you relate to any specific character?

They're pretty amazing. The other day I stumbled on a clip of Debbie Harry singing a duet of "The Rainbow Connection" with Kermit the Frog. And I have to say, I cried. It's interesting to me that your first time doing makeup, you did the Joker. Were you attracted to the Joker because of the makeup or because of the character ?

I was probably 13 or 14. I was so young and wanted anything that could resemble heavy makeup or having something brightly colored without actually telling people that I wanted to dress as a woman. I was hoping I could get away with it and still pass as a little gay kid. So I think the Joker was that.

It's a bit of a transitional character — still a man, but it's got the face paint. Do you think that aliens come to Earth regularly? Are there aliens around now?

Besides you? You mentioned, Mr. Bean. Do you think there are other celebrities that are really aliens? Of course, you're the most famous and most gorgeous alien, but are there other less gorgeous aliens among us?

Absolutely. Tim Burton is gorgeous, but he's definitely an alien. Definitely. If you Google "1960s alien in disguise," it comes up with high school photos of people that look like they could be an aliens. It is just the best thing in the world. They have like warped features and stuff.

Well, I know what I'm going to be doing this afternoon. I love in one of your videos you were saying to make sure to tell yourself that you look stunning every day. I think that's a great positive thing. Tell me a little bit about your journey. Have you always felt good about your stunning self?

I've not always felt like that. I think I've spent a lot of my time as a kid and as a teenager just telling myself that. I've never felt comfortable with my body and didn't see any other way forward other than transitioning. I think because I'd missed out on so much of my life, telling myself I've been stunning, I do it even more now since I'm making up for lost time. And also, I get so many comments and messages from people saying that they literally can't tell themselves that they're stunning. So I push it forward a bit because I think if you tell yourself that you are stunning, it's almost like a delusion. If you do it long enough, you start to believe yourself. It leads into actual real confidence.

I love it. Are most aliens glamorous like you or are there all different types?

Oh, there's all different types. Absolutely. My sense of fashion and glamour is not what a human would see as glamorous. I'll put a hot dog costume on and think I'm absolutely gorgeous. I'll be inspired by food and things like that when it comes to fashion. It's like when an alien is cooking dinner and they don't really know what is used in the meal. So they'll throw the whole egg in, the eggshell and everything. Or they'll put pieces of carpet in with the macaroni and cheese and think that's normal. It's the mistakes and the clumsiness that come into my fashion, I think.

Well, he's welcome for a cup of tea any time as long as he doesn't overstay his welcome.