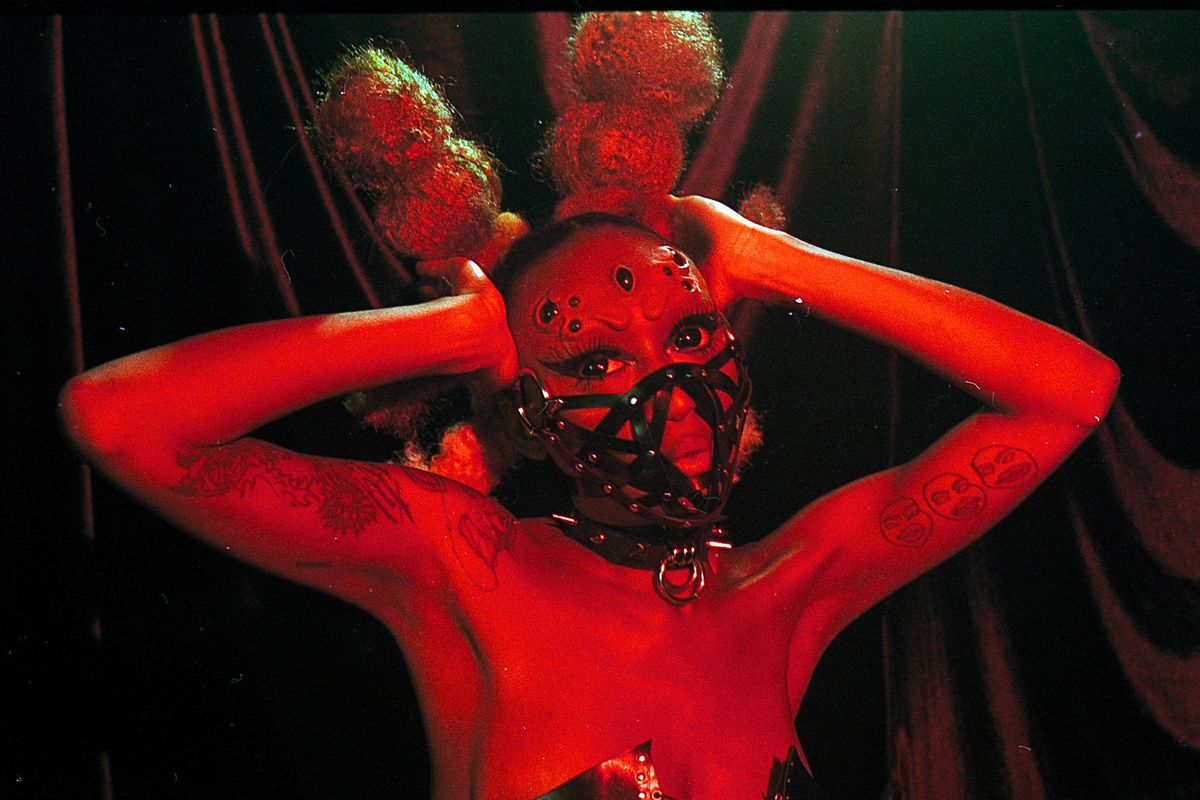 Get Caught In Junglepussy's Tangled Web

Junglepussy knows that a female arachnoid is far more powerful than its male counterpart. As the story of a female Black Widow goes, they often consume their male mates after luring them to their webs made of pheromone-laced silk and copulating. The pure savagery of this act is honestly pretty inspiring.

Related | Junglepussy Is the Comedian We Deserve

The New York rapper takes these ideas to new self-empowered (and terrifying) levels in her music video for "Spiders," out today. The track itself marks a notable sonic shift from JP's past work, dabbling heavily in haunted atmospheric beats and lo-fi sung vocals. The result is both sensual and freaky. "I heard you're the type to do/ all the things I want for free," JP croons, her voice dripping with menace.

For the video, directed by Caity Renee, JP recruits makeup artist Raisa Flowers to transform her into a seductive spider, complete with enlarged pupils, and additional sets of eyes and markings. She writhes around her giant web in bondage before a hapless man, prey to JP's fatal charms.

JP says she was inspired to make the song after being stuck in her own web, so to speak, and not sharing the most important parts of herself.

"This song taught me more about myself just like spiders do," she says. "I have an undeniable connection to what they represent, the ultimate feminine creative energy! Female spiders are larger than the males, I wonder why? With all those eyes, spiders are damn near blind... did you know I wear contacts?"

JP's identification with female spiders is also intuitive. As an artist who is always pushing her own boundaries of what she can achieve, she notes how female spiders govern themselves differently from males.

"They go off vibration and don't believe what they see, they don't trust systems... they trust themselves and their feelings, following their own rules," JP says. "If their web happens to gets damaged by a silly humanoid they build a stronger one, if they lose a limb they grow another one. Spiders' silk is one of the strongest natural fibers, they say it's tougher than Kevlar. I can go on for days. I knew this had to come out around my birthday, it's a gift to my web."

JP also wants "Spiders" to give voice to those who go undiscovered.

"We know there are thousands of different spiders, but I'm talking about the solitary spinners with serious indie attitude," she says. "Spiders weave their intricate webs in solitude, minding their business yet lowkey knowing they're bound to be discovered. Bugs stumble in and get trapped then it's like, thanks for the snack! They liquify their food. I love smoothies."

In honor of her birthday and the "Spiders" release, JP will play a free, Dr. Martens-sponsored show tomorrow at 7 PM. It takes place at Superchief Gallery in Ridgewood, Queens. RSVP here.