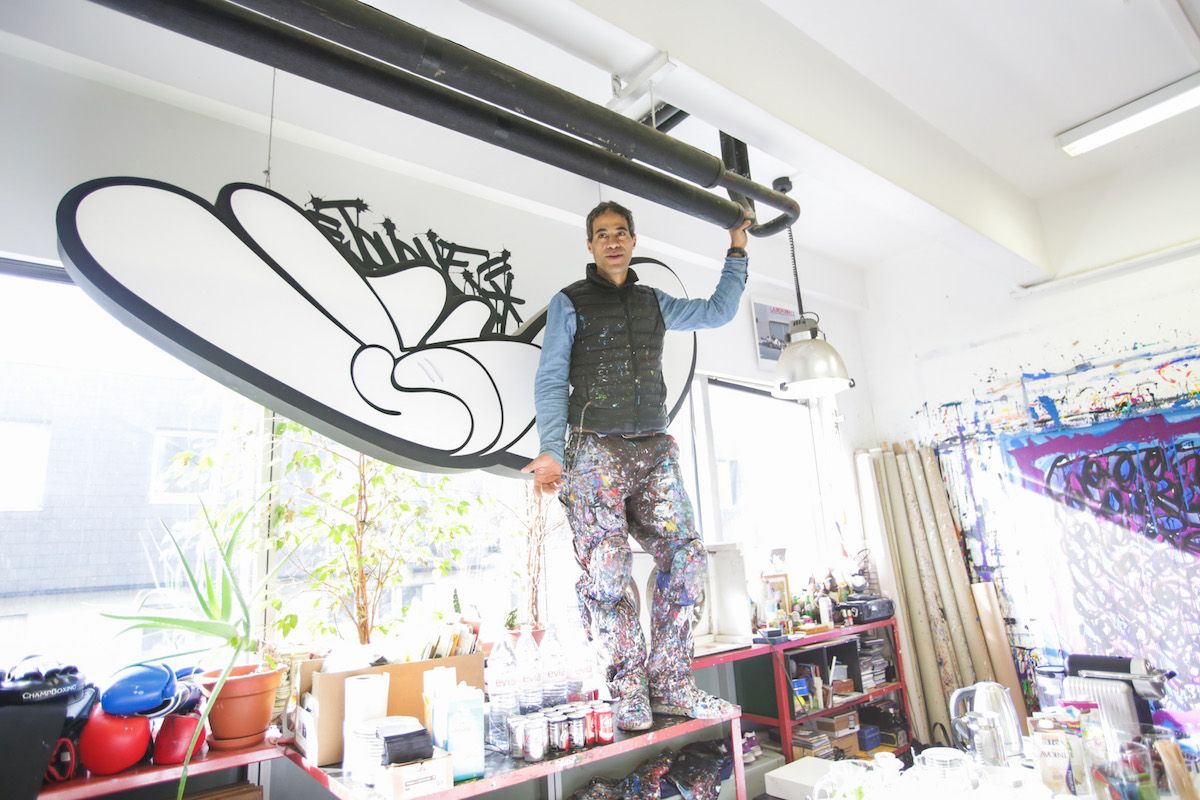 JonOne is Like a Kid in a Candy Store

The energetic, abstract paintings of Paris-based artist John Perello, aka JonOne, occupy that modern space between graffiti, street art, fine art, and commercial art, but JonOne doesn't like labels. Whatever you do or don't call it, over the past few years, one thing has become clear: everybody wants some.

The latest evidence of his it-boy status was announced today: a JonOne Very Special Limited Edition Series bottle for Hennessy, with which he joins the ranks of maverick art world superstars like Shepard Fairey and Scott Campbell, who designed previous editions for the brand. This partnership is the latest in a long list of luxury lifestyle collaborations for JonOne in a very short period. In late 2014, he designed labels for Perrier, 2015 saw a custom-painted jetliner for Air France and a line of shirts for Lacoste; in 2016, there were perfume bottles for Guerlain and portable speakers for LG. Longines just released a poster by JonOne for an upcoming equestrian event.

One of his most distinguished patrons is the French government itself. In 2015, he was commissioned to paint a large-scale Delacroix-inspired work, housed in the French National Assembly, a version of which was also released as a commemorative postage stamp. The same year, he received the Ordre national de la Légion d'honneur (an award founded by none other than Napoleon Bonaparte) to recognize his contributions to French culture. He has also been producing and showing his paintings constantly, sometimes doing up to six solo gallery shows per year.

All of this is made more remarkable by the fact the JonOne is not French, nor is he some wunderkind or social media marketing genius. Perello, who is of Dominican descent, was born in 1963 and grew up on 157th street in Harlem. He has been producing work at a feverish pace for over 35 years. His career dates back to 1980 when he started painting in the subways (the Broadway line was his favorite). Back then, he spent his days and nights painting trains and tunnels, listening to WBLS with his crew in bodega cellars-turned-studios, and partying at clubs like Studio 54, the Roxy, and the Palladium, where he also had a job.

So how did he end up in Paris, getting medals from Napoleon? We met up with him recently in his studio, in a suburb of Paris called Les Lilas, to discuss his long, unusual ascent.

What prompted you to leave Harlem?

My art became my passport out. One day, I got a call from a graffiti writer from Paris. At the time, I could not fathom why anyone would be doing graffiti in France. To me, graffiti was a ghetto thing. I was curious to hear what the French tag artist had to say.

We met at the back of the no.1 subway train going downtown. His name was Philippe Lehman, aka Bando, the pioneering tag artist who brought graffiti art to Paris. He was a kid from a good family, founders of Lehman Brothers bank, and lived in a chic neighborhood of Paris. He asked me to come to Paris to paint a wall at Stalingrad. According to him, my style was already known there.

In 1987, I bought myself a ticket and flew to Paris based on that invitation. I had saved some money and was able to pay my own way. I painted the wall at Stalingrad and was introduced to the local hip-hop scene. It was very small then, but had the same vibe as the beginnings of the street art movement in New York.

In the late 1980s, graffiti in New York was dying down. Drugs were part of it. Hip-hop shifted away from peace, love and having fun, and there was violence. People had to get real jobs. No one was living the graffiti version of Westside Story, that romantic image of the street.

Arriving in France, I realized that other artists were already following my work. This was before the Internet, when people exchanged photographs. So, as it turned out, my style was something of a reference already, and people felt my energy. I was very well received in Paris.

What was the street-art scene like in Paris in 1987 when you first landed here?

It felt to me like I was reliving the beginnings of street art in New York. A lot of people, musicians, trendy fashion people and actors were interested in street art back then.

Graffiti was still in its infancy, but I landed in a very creative circle here. There were no Americans, and perhaps the way I felt can be equated to what Jazz musicians like Charlie Parker or Miles Davis experienced; people who came over here to be recognized and accepted. The reaction of people to me was: “Oh you are a graffiti writer, that's fantastique!"

When you came to Paris did you get into the nightlife scene?

There was this one place: Les Bains Douches. That was a notorious place because there was this lady who wouldn't let anybody inside. This was in '87. She was notorious, she would never let me inside. She wouldn't let Mick Jagger or Keith Richards in either.

How do you explain the evolution of your art from being street-based to canvas?

Back then, I told myself that street art was the art of my generation. Maybe the generation that preceded us lacked the information or sensibility to understand us. But I knew it was very important. It was important for future generations to see what we were doing, for my environment and my generation to preserve that work. I really didn't fit in with my environment, we didn't fit in nowhere. I was just doing my own thing. I was just painting with brushes in the streets -- that's avant-garde.

I started going to museums and asking myself, how can I transition from spray painting in the street to the canvas? How can I fit my work into the history of art, a history that I've never actually studied? I was always pushing my work further, to the next step, for better or worse. As an artist, you never know if your master plan is going to work. You never know if you are going to get shows, if your art is going to sell, whether you're ever going to have the chance to do a bottle of Hennessy Cognac.

In Paris, I really didn't have that urge like I had in NY to paint trains. In Paris, it was like, "look at where we at now!" I was more insprired by the city. I had an opportunity to breathe, and reflect, to paint away from the environment of being in a tunnel and having to watch your back. In Paris, I can paint in a studio, take my time.

So now after 30 years in Paris, you are settled in a large studio of your own. But before you moved in here, where were you painting?

This studio is where I work today, and have for the last eight years. Before that, I was in and out a lot of different studios, always moving around. During my first years In Paris, I lived and worked in squats, which are abandoned buildings occupied by artists. I must have done all the squats in Paris: the Fonderie, the Hopital Ephemere and other places in Belleville. The squat was like a form of financial aid from the French government.

For years, I continued to be itinerant, moving from studio to studio until a friend suggested I find an atelier to call home. I struck up an acquaintance with an agent who liked my art, and he found this place for me. It's got two separate spaces, and the light is good. There are also other artists in the building.

I'm planning on taking a studio in Roubaix, in northern France soon. I'll keep one of the studio spaces in Paris, but I'll have a very large space, about 300 meters (3,000 sq. ft.) in Roubaix, with very high ceilings. There I will really be able to paint.

When you think back to those early years, was there ever a turning point for you, when you decided to devote yourself to art?

One day, I met an art dealer in New York who was the ultimate bohemian. He used to sell Warhols and lived on Park Avenue. It's through him that I came to realize the importance of art and got “addicted" to the idea of being an artist. He had put on a gallery show of graffiti artists, and I went to see it. That's how we started going to museums together…. I asked him once: “How will I eat as a full-time artist?" He said: “All you need to do is to think about painting, and the rest will come to you." It was one of the scariest things anyone had ever told me. It was frightening because around me, there was no one who worked outside the system; everyone measured their life by how much they made by the hour.

You've had a phenomenal couple of years. Is all this recognition a good measure of success for you?

I find it to be quite gratifying. I've always done things my own way, you know, like the Frank Sinatra song. It's satisfying that today, after doing so many things, my professional life is going well. For a long time, my artwork was looked down on; now it's kind of trendy. But there was a before; before, I was considered more like a vandal, a degenerate, and all these kinds of terms that people were imposing on me. It was difficult, there were all these obstacles. Now, having the opportunity to be here is like letting me inside a candy store. After all these years of not being allowed in the candy store, I'm finally allowed in the candy store. I want to fill my pockets up.

Below, check out some pics of JonOne at his studio in Les Lillas, and with his work at Art Paris.