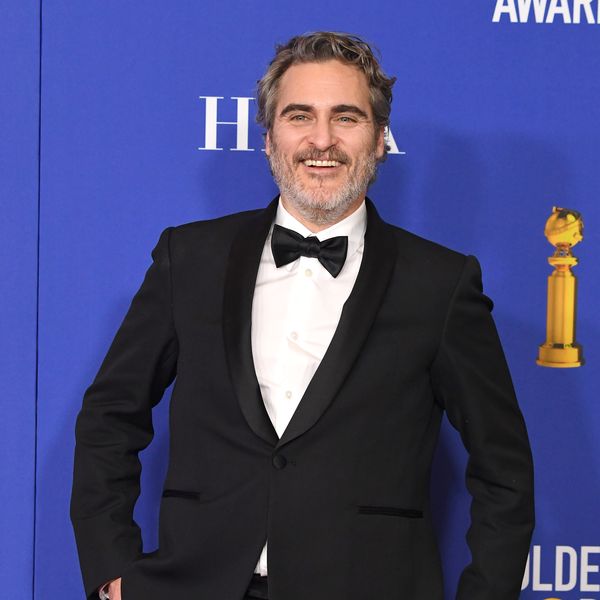 Joaquin Phoenix Combats Climate Change One Suit at a Time

With a fresh Golden Globe for Best Actor in a Motion Picture in the Drama category from this past Sunday and a slew of BAFTA nominations newly announced today, this awards season is already shaping up to be a busy one for actor Joaquin Phoenix. Suffice it to say, the Joker lead is set to become a familiar face in the upcoming onslaught of red carpet round-ups, but unlike a lot of his fellow nominees, Phoenix has already let us know what he'll be sporting all season long.

In a tweet posted by Stella McCartney yesterday, the designer announced that we'll be seeing Phoenix in the same custom black tux for the entire 2020 award show season in an effort to cut down on waste. "This man is a winner… wearing custom Stella because he chooses to make choices for the future of the planet," McCartney wrote. "He has also chosen to wear this same Tux for the entire award season to reduce waste. I am proud to join forces with you."

This man is a winner… wearing custom Stella because he chooses to make choices for the future of the planet. He has… https://t.co/hPspkNF1G7
— Stella McCartney (@Stella McCartney)1578304498.0

A noted vegan, animal rights and climate activist, the move doesn't come as a big surprise from Phoenix. In his acceptance speech, the actor lauded the Hollywood Foreign Press Association for curating an exclusively plant-based menu for the night as well as the many nods fellow winners had made to the climate crisis and specifically the ongoing Australian wildfires.

But Phoenix also urged his fellow nominees to go a step further and put their money where their mouth is, saying "It's great to vote but sometimes we have to take that responsibility on ourselves and make changes and sacrifices in our own lives and hope that we can do that. We don't have to take private jets to Palm Springs for the award sometimes, or back."

By electing to only wear one suit for the entire season, Phoenix is choosing to lead by example. In his new column for PAPER, Wear Me Out, writer Evan Ross Katz pointed out that despite the HFPA's very vocal commitment to environmentally conscious choices, there lies an inherent hypocrisy in the rotating carousel of starlets sporting new customized one-off gowns at each event.

It's no secret that the fashion industry is a major contributor of global waste, and while many brands and designers, McCartney included, have made concerted efforts to minimize environmental impact, those measures can only go so far. As Phoenix (and to a lesser extent Gervais') pointed out, the onus lies on the celebrities to take responsibility for the ways their lives contribute to the current climate crisis and ultimately do better.