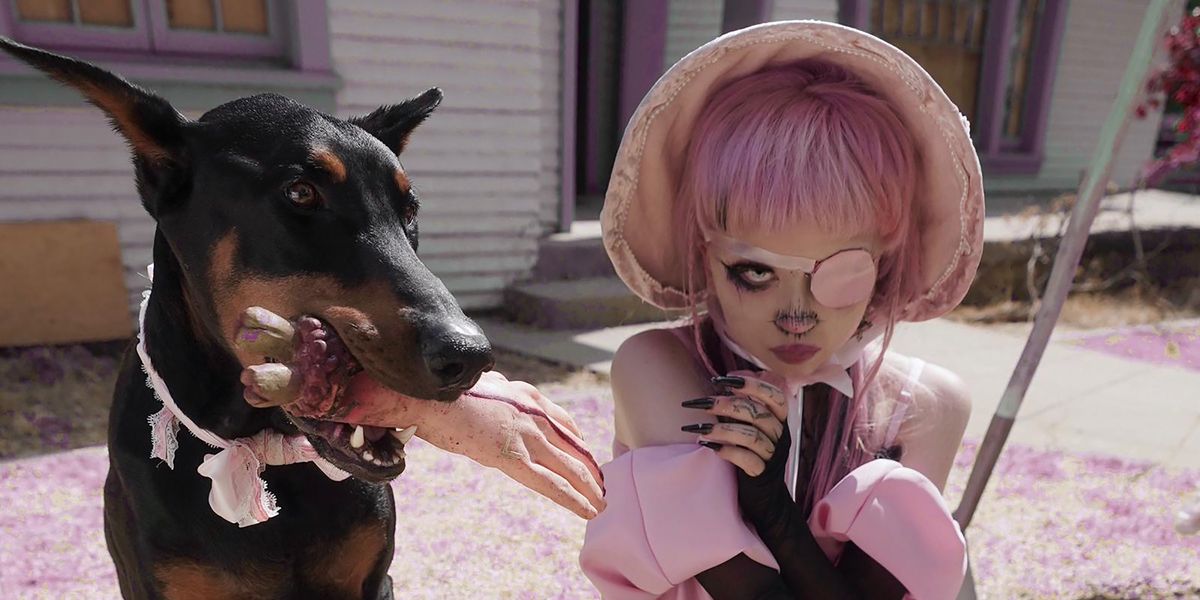 "You know that state you get in with an intense crush when you feel like with anyone that gets in the way that you want to rip their face off?" Jazmin Bean asks over the phone, discussing the meaning behind their new song and lovestruck visual, "Yandere" premiering today with PAPER. The nonbinary, British visual artist and musician first gained prominence on social media for their surrealist makeup, striking gothic femme fits and self-dubbed "genderless monster" style.

Last October, Bean released Worldwide Torture, a five-track EP composed of distorted ballads, electric guitar-backed anthems drenched in overdrive and lyrics chronicling intense love, all-encompassing lust and the heightened emotions in-between. And on November 11, Bean will re-release this EP with four additional tracks, including the heart-breaking pop-tinged "B4 The Flight," the Zheara Sparks collab "Monster Truck," a cover of the classic Britney Spears track, "I'm a Slave 4 U" and "Yandere," which is out today.

In the opening scene of its perfectly spooky visual, Bean is seen burying a foe who "got in their way" of their crush. "In the first scene I bury someone," Bean explains. "Yandere is a character based in anime and in games where it's someone who has a really intense love. It's a bit gory — they kill anyone who is in the way of that crush or who the crush may like or that's a potential threat."

Donning a bubblegum pink-colored, ruffled dress adorned with black lace appliqué, Bean's stained hands smear blood on the walls of a hallway. They sing directly to the camera about a deep, undying love that might just require the murder of any obstacles along the way. "This might get a little messy I'm sure/ Heads rolling for the one I adore," Bean sings in a bloody bathroom, alluding to a crime scene.

Bean is seen riding a bike in more iconic lace fits, and appears sporting vampire fangs and a disemboweled midsection in other gory, romantic scenes. Fluttering keyboard notes, slicing sword sounds and heavy guitars back their airy soprano vocals. "It's cutthroat to anyone who comes close," sings Bean, who's eventually arrested — looking at the camera from a cop car — before finally appearing with a Doberman and shovel.

"Yandere" serves as a sequel to "Saccharine" on the upcoming EP, Bean explains, as its lyrics describe two distinct stages in a turbulent love affair and the feelings that come with it. "'Saccharine' is about getting a crush and thinking, 'Oh no I don't know what to do, this is such a strange feeling for me, I don't want to do this.' Then, 'Yandere' is the aftermath, [thinking], 'Now I'm in it and anyone who gets in my way is going to have trouble.'"

"Sound effects throughout the songs helped structure the EP and make each song its own vibe and own story," Bean says, referring to the ear-piercing screams, haunting giggles and reverberating gunshots that can be heard throughout the upcoming four tracks, which are also inspired by horror films from Ari Aster and classic creepy stories penned by Tim Burton.

"I've loved underground and electronic music for a long time," Bean says of their inspirations. "My parents both were in punk and rock bands, so I've always been exposed to the more underground and heavier sides of music. The Midsommar soundtrack and the Corpse Bride soundtracks are so beautiful. I love their strings and orchestral, very dramatic sounds. Film soundtracks are extremely inspirational to me. They are where I get my sound from, a lot of the sound effects."

Working remotely and through quarantine, Bean says their songwriting and creation process was "quite stressful," but worth it as they're excited for fans to hear Worldwide Torture in full next month. "I wanted to make my own little world," Bean says of their upcoming EP, adding that it was "inspiring" and a great "distraction" in a "gloomy time where you feel like the world is crumbling."