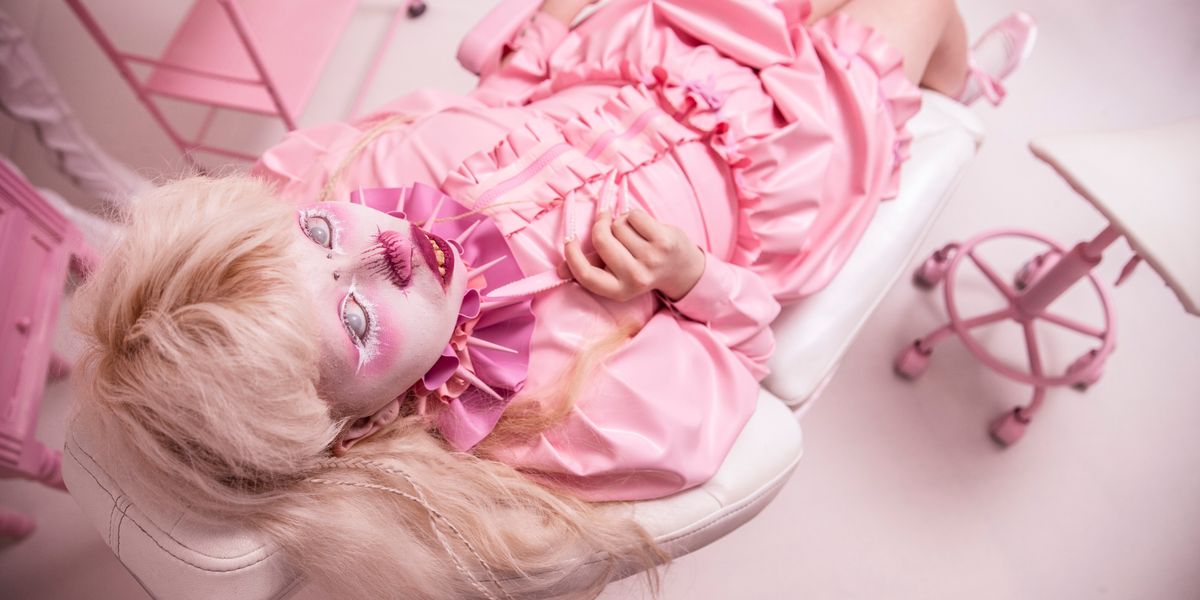 Welcome to the Bloody, Pastel Pink World of Jazmin Bean

Jazmin Bean delights in disturbing. Their 90,000 follower-strong Instagram is a fully rendered, pastel pink, ruffled, blood-dripping horror movie universe, inhabited by the London artist's cast of terrifying, whimsical, magnificent creatures. Their characters are typically murderous-looking, debased takes on of high-femme mythological creatures, cartoons or movie tropes. They play every role, thanks to their visionary make-up and prosthetics skills, and cosmetics company, CultCandy Cosmetics.

Jazmin is a multi-hyphenate. The make-up artist and content creator is also an independent musician, who makes freaky, genre-bending songs. Their eerie tunes play on similar cinematic themes to their visual art, adding a whole new dimension to their universe.

The first verse of the title track of their new EP, "Worldwide Torture," might double as the mission statement for Jazmin's universe. "I'm a nasty little cunt/ Break your teeth and break your heart/ Hit you where it hurts and all/ Sweetest bitch you've ever known," they sing. "I'm a nasty little swine/ Take and Break what isn't mine/ I'm gonna destroy the world/ Sweetest shit you've ever known."

Today, PAPER shares a new visual for one of the EP's tracks, "Saccharine:" a grinding pop song that details a romantic obsession gone wrong, and how a crush can feel like a splitting sugary toothache. "I don't mean to scare but you're just so cute/ Every move you make/ You're fucking sweeter than a cake/ I wanna cut you up and put you in my oven just to bake," they sing, "Everything you say is like poetry/ I want to drop you in boiling water drink you like chamomile tree." Oh!

The Jekyll and Hyde pop song flips between a grinding, distorted rock instrumental, and dreamy pop sounds. It's extension of their cartoon, but it also has tender side. On the chorus, you can hear the human singing rather than the monster, expressing genuine anxieties about the vulnerability of intimacy. "Oh oh this shit is scaring me/ The thought of caring for anyone makes me want to scream."

"Saccharine" comes accompanied by a visual dentist trip to hell. Who's the physician? None other than PAPER favorite visual artist and designer Salvia, who administers a root canal on Jazmin but — just like unrequited love — leaves them a bloody wreck.

"This EP is obviously my first body of work and I wanted to show people a small bite into my world, my lyrics and imagery come from all my inspirations the things and situations around me or that I'm dealing with and just out of my mind," Jazmin tells PAPER.

The artist describes their influences as "genres from my favourite films and art and music I've grown up with... I love Tim Burton and Jim Henson and all their soundtracks and I adore theatricality and hyper femme and hyper crazy art and think there should be so much more of it in the music industry."

"Saccharine" doesn't predict too much about the EP's sound, however. "Each song is a different genre that I love and cherish," Jazmin says.

Ultimately, the artist has the same hopes for their music as the rest of their work.

"I just want to put on a show for people and be able to distract them from their problems, like watching a cartoon or something. I'm a character they can relate and attach to that they can watch be hyper femme and crazy and theatrical and feel no shame for it."