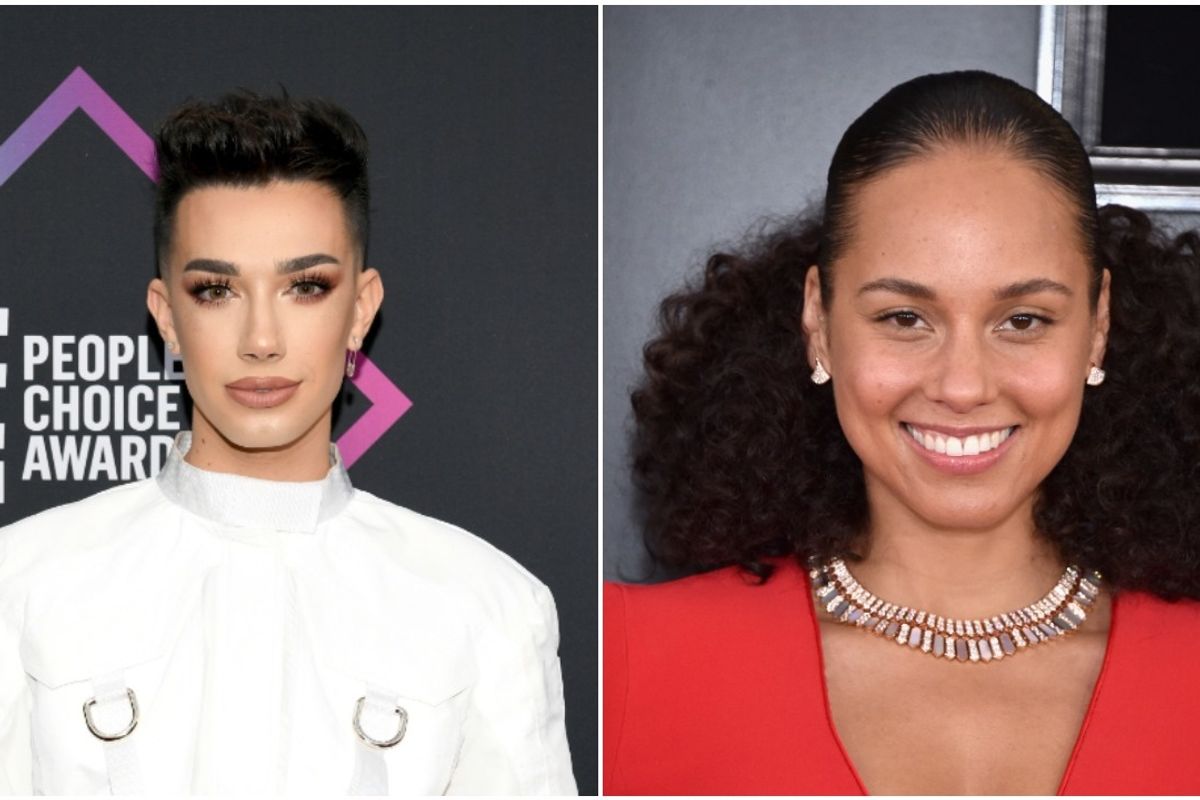 James Charles has apologized to Alicia Keys for a shady subtweet about her new beauty collaboration.

On Wednesday, the Grammy-winning singer-songwriter revealed that she would be partnering with e.l.f. Cosmetics on a "lifestyle beauty" brand combining "an inclusive point of view, an authentic voice, and a line of skin-loving, dermatologist-developed, cruelty-free products." And while most responded to the news with praise, James and fellow beauty vlogger Manny MUA apparently had some questions about Alicia's new endeavor.

Shortly after the announcement, James took to his Twitter to ask why Alicia — a longtime advocate for natural, makeup-free beauty — was partnering with e.l.f. Cosmetics.

"People who do not wear makeup should not be coming out with makeup brands," the since-deleted tweet read. "But that's just my opinion."

Manny also chimed in by asking his followers whether "anyone else [gets] slightly irritated when celebs come out with entire makeup lines? Especially when those celebs don't even wear makeup."

The vlogger then went on to explain to a fan that while he gets why "glam girls" like Rihanna and Kylie Jenner start their own beauty brands, he wasn't sure why some other celebs were doing the same — a stance he doubled down on by writing, "I thought she didn't wear makeup………" on TrendMood's post about the line.

see with rihanna and kylie i get it tho.. they’re glam girls! they wear makeup, they’re known for their makeup so i can see that.... but some other people im like HUH?!

That said, it didn't take long for people to criticize the double standards underlying James and Manny's comments, especially considering their previous lack of criticism concerning similar lines from the likes of Selena Gomez and the D'Amelio sisters.

James Charles being loud as hell to subtweet Alicia keys but was quiet when little miss Charli and Dixie D’amelio announced their collaboration with Morphe, keep the same energy shishtar or shush! pic.twitter.com/qE4wWC03Xv

How does manny and James Charles shade Alicia keys aka a black women for starting a makeup brand and at the same time say they are excited for Selena Gomez makeup company to start .... like make it make sense 🤡

Not only that, but YouTuber Kahlen Barry also echoed these sentiments by asking why "y'all always wanna shade Black women."

"But where is this energy for the other yt women that are coming out with makeup lines?" Kahlen continued, before directly calling out James and Manny in a later tweet.

"I'm actually so annoyed," he said. "You're REAL loud when disrespecting Black women but won't dare raise your lips against a white woman doing the same thing ur trying to drag a Black woman for doing."

Kahlen Barry, who has called out Tana Mongeau for her racist micro-aggressions, now calls out James Charles and Manny Mua for allegedly coming for Alicia Keys new Beauty Brand. pic.twitter.com/iKotG6ehLy

In the wake of the backlash, James returned to Twitter on Thursday to post his apology to Alicia, writing that he "was bothered because many celebrities come into the beauty space as a cash grab without any actual passion and then leave."

"it's childish to indirect tweet someone & I am not the gatekeeper of makeup. Anyone should be able to secure their bag and it's not up to me which brands people should or shouldn't support," he continued, explaining that he later learned Alicia's collaboration was a skincare line.

"This was my mistake and I should've read more before tweeting because literally who BETTER to talk about keeping your skin clear without makeup?" James added. "Regardless of my intention with my tweet, it ended up being a microaggression against someone I respect, so to @aliciakeys I owe a direct apology—I'm sorry."

Manny subsequently ended up tweeting out his own apology as well, writing that he gets "defensive of the beauty community because so many celebrities only come out with cosmetics lines as a cash grab."

"But I shouldn't have jumped the gun and regardless, I know I am not the be-all-end-all voice of makeup ...anyone can create what they want to create! That's the beauty of our community!" he said, before apologizing for "being so quick to make a judgment" and that "there is room and space for EVERYONE in this community."

See both of their apologies, below.