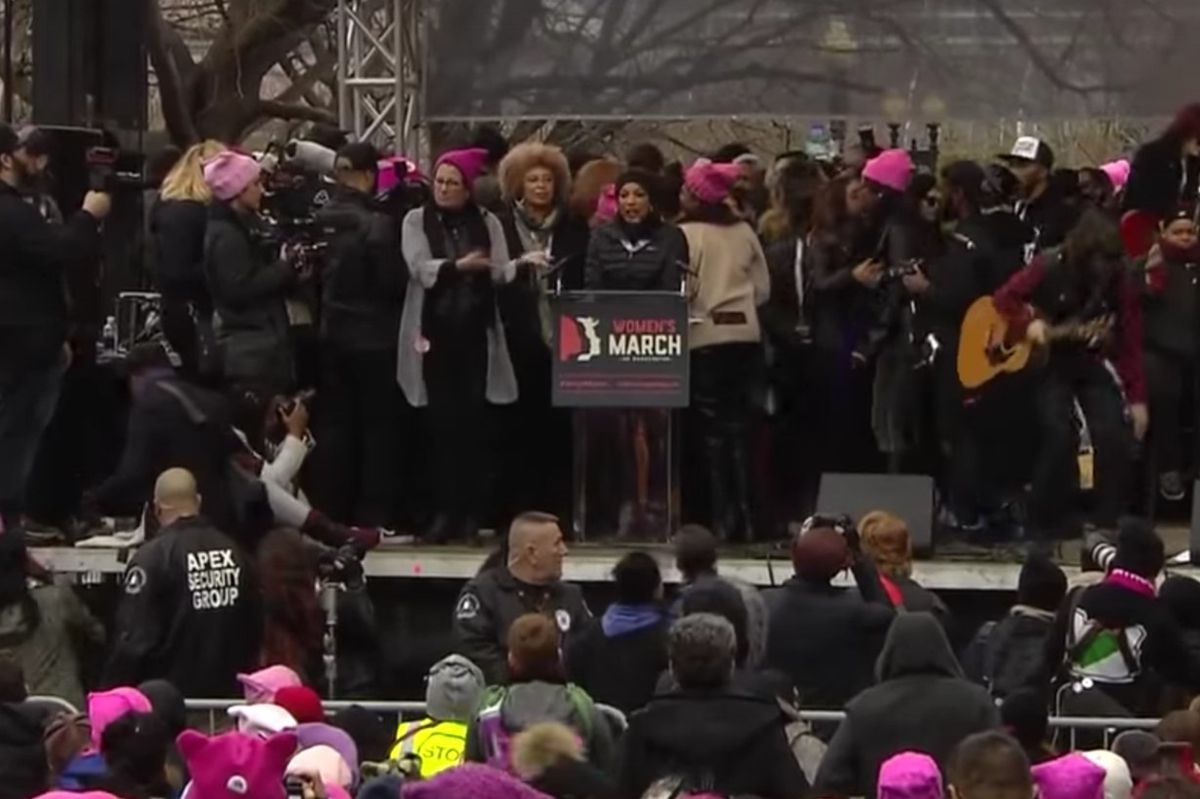 From Speaking to Marching, Celebrities Turned Out for the Women's March on Washington

When it was first dreamed up in the days after the election, only 250,000 people were expected to show up to the Women's March on Washington, but what began as local demonstration created a ripple around the world--over 2.9 million people poured out into the streets on Saturday to protest the election of Donald Trump.

Marchers were met with a star-studded list of speakers ranging from senators and activists to move stars and pop divas. And there were many more celebrities in the crowd. Here are some of the big names of the day.

America kicked off the rally with her impassioned speech about immigration and women's rights. "It's been a heartrending time to be both a woman and an immigrant in this country. Our dignity, our character, our rights have all been under attack, and a platform of hate and division assumed power yesterday," she said.

After talking about how Planned Parenthood saved her growing up, Scarlett spoke about the importance of having access to healthcare. "There are real and devastating consequences to limiting access to what should be considered basic healthcare," she said.

Johansson then spoke to Trump directly,"President Trump, I did not vote for you. I want to be able to support you, but first I ask that you support me."

Katy Perry attended the March in Washington, D.C., where over half a million people showed up (doubling the expected 250,000 and effectively shutting down the city for the day). She posted a picture of herself and her sister on Instagram, telling fans she marched to "break the cycle of suppression and inequality."

Our favorite Girl and beloved local politician, Lena Dunham and Amy Poehler held their own mini-march in D.C. They arrived on the scene with the whole Lenny team and chanted "Women are powerful and dangerous" and "Jesus was a feminist."

After reciting the lines to Maya Angelou's iconic "Still I Rise," Alicia broke into her hit song "Girl on Fire."

"We want the best for all Americans -- no hate, no bigotry, no Muslim registry," she said.


Janelle, standing alongside the Mothers of the Movement, had the crowd participate in a song she wrote for the March, "Hell You Talm About." She led marchers in chants of "Sandra Bland--say her name!" while speaking on the importance of Black Lives Matter and intersectionality.


Singer and actress Zendaya was part of the half million-strong D.C. crowd. She posted on Instagram and Twitter about what she saw. She also took over Vogue's Snapchat to detail the events of the March.

Chrissy posted pictures of the D.C. March on Twitter. She also spoke about the aftermath of the March, when White House administrators tried to discuss the media's "mis-reporting" on the crowd size at the inauguration as a distraction from the March.

"People in pain. People need jobs. People need healthcare. People want equality. But let's have a press conference on crowd size. My god," she tweeted. "My god, how you were fooled into thinking he cared about you when all he wanted was the painting and placard. Absolutely disgusting."


Introduced by Amy Schumer (who was wearing an orange jumpsuit decked out in protest buttons), Madonna took the stage to speak about her anger at the election.

"Good did not win this election. But good will win in the end...Yes, I am angry," Madonna said. "Yes, I am outraged. Yes, I have thought an awful lot about blowing up the White House. But I know this won't change anything. We cannot fall into despair."


Intersectionality was the word of the day at the Women's March. Trans activist and TV personality Janet Mock spoke at length about the importance of working together for individual causes.

"I stand here today because I am my sister's keeper," she said. "Our approach to freedom need not be identical, but it must intersectional and inclusive. It must extend beyond ourselves."


The Women's March in London was the longest I have been on. See the rest of my message attached. pic.twitter.com/q7QC4Jvg0S
— Ian McKellen (@IanMcKellen) January 22, 2017


Ian and his glorious sign joined the sister march in London where over 100,000 people turned up to protest. In a note he posted to Twitter (above), Ian praised the creativity of the march and referred to the new president as President Breaking Wind.


Feminist thinker and co-chair of the March, Gloria Steinem delivered the keynote address. She spoke about the power people can muster when they work together and explained how elections have irrevocably changed the course of American history. She also warned marchers that Trump should not be allowed to continue leading as he has done so far.

"Trump and his handlers have found a fox for every chicken coop in Washington, and a Twitter finger must not become a trigger finger," she said. ""We are here and around the world for a deep democracy that says we will not be quiet, we will not be controlled, we will work for a world in which all countries are connected. God may be in the details, but the goddess is in connections. We are at one with each other, we are looking at each other, not up. No more asking daddy. We are linked. We are not ranked. And this is a day that will change us forever because we are together. Each of us individually and collectively will never be the same again."


The newly-elected senator from California, Kamala Harris, is not only the second black woman to be elected to the Senate but the first Indian-American senator in American history. She spoke about the future of civil rights and women's issues, saying how "absolutely personal" they were.

"The fight for civil rights will be fought and won with each generation. Whatever gains we make will not be permanent," she said. "That's the nature of it, so let's not be dispirited...Let's just get up, pick ourselves up and get out there and fight. Fight for equality, fight for fairness, fight for justice."

Senator Tammy Duckworth brought her two year-old daughter to the March, "this is her first protest" she said.


"This is about our country," Duckworth said Saturday, "I didn't shed blood to defend this nation – I didn't give up literally parts of my body — to have the Constitution trampled on. I did not serve, along with the men and women in our armed forces to have them roll back our rights. It's about you going home after today and standing up and fighting in your communities."


Documentarian and filmmaker Michael Moore outlined his viral To Do list for dealing with Trump's regime. Call your congresspeople, he urged the crowd, run for office and take back the Democratic party.

"Look at what we've already accomplish here today. The majority of Americans didn't want Donald J. Trump in the White House and we're here today as their representatives," he said.

"I am a nasty woman," Ashley recited. "Not as nasty as a man who looks like he bathes in Cheeto dust, a man whose words are a dis to America, Electoral College-sanctioned hate speech contaminating this national anthem. I am not as nasty as racism, fraud, conflict of interest, homophobia, sexual assault, transphobia, white supremacy, misogyny, ignorance and white privilege."


Civil Rights activist Angela Davis was one of the final speakers for the day. She urged marchers to remember those still fighting at Standing Rock to protect their water and to think about the Civil Rights movement and the unfortunates caught up in the country's anti-immigration fervor.

"This is a women's march and this women's march represents the promise of feminism as against the pernicious powers of state violence. And inclusive and intersectional feminism that calls upon all of us to join the resistance to racism, to Islamophobia, to anti-Semitism, to misogyny, to capitalist exploitation," Angela said.

"Over the next months and years we will be called upon to intensify our demands for social justice to become more militant in our defense of vulnerable populations. Those who still defend the supremacy of white male hetero-patriarchy had better watch out."