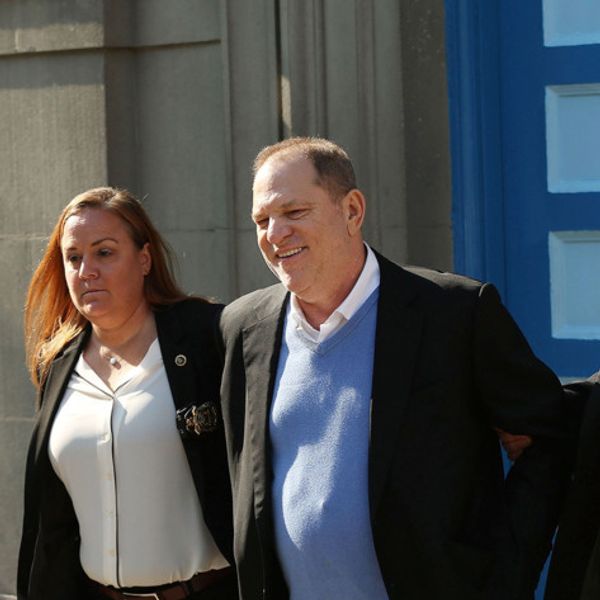 Harvey Weinstein Charged with Rape After Turning Himself In to Police

Film mogul and alleged serial predator Harvey Weinstein has been arrested in New York — a monumental victory for his survivors, the press and gender equality. Images were released today of Weinstein handing himself into the NYPD on rape and sexual abuse charges, three years after they began investigating him. He emerged from the precinct two hours after entering, wearing ill-fitted jeans, handcuffs and a smile.

Weinstein has racked up accusations of sexual misconduct from more than 90 women, most of whom are actresses who have worked with him in Hollywood. Many A-List stars, including Gwyneth Paltrow, Salma Hayek, Lupita Nyong'o, have alleged Weinstein either assaulted or harassed them, and their stories served as the catalyst for global movements like #MeToo (the social media hashtag which allowed women to come forward with to reveal their own abuse). Weinstein's arrest is a credit to his accusers, those who listened to their accounts and women all over the world who have braved abuse.

Rose McGowan, one of Weinstein's first and most-vocal survivors, has released a statement via Instagram. "I, and so many of Harvey Weinstein's survivors, had given up hope that our rapist would be held accountable by law," she wrote. "Twenty years ago, I swore that I would right this wrong. Today we are one step closer to justice. We were young women who were assaulted by Weinstein and later terrorized by his vast network of complicity. I stand with my fellow survivors. May his arrest give hope to all victims and survivors everywhere that are telling their truths."