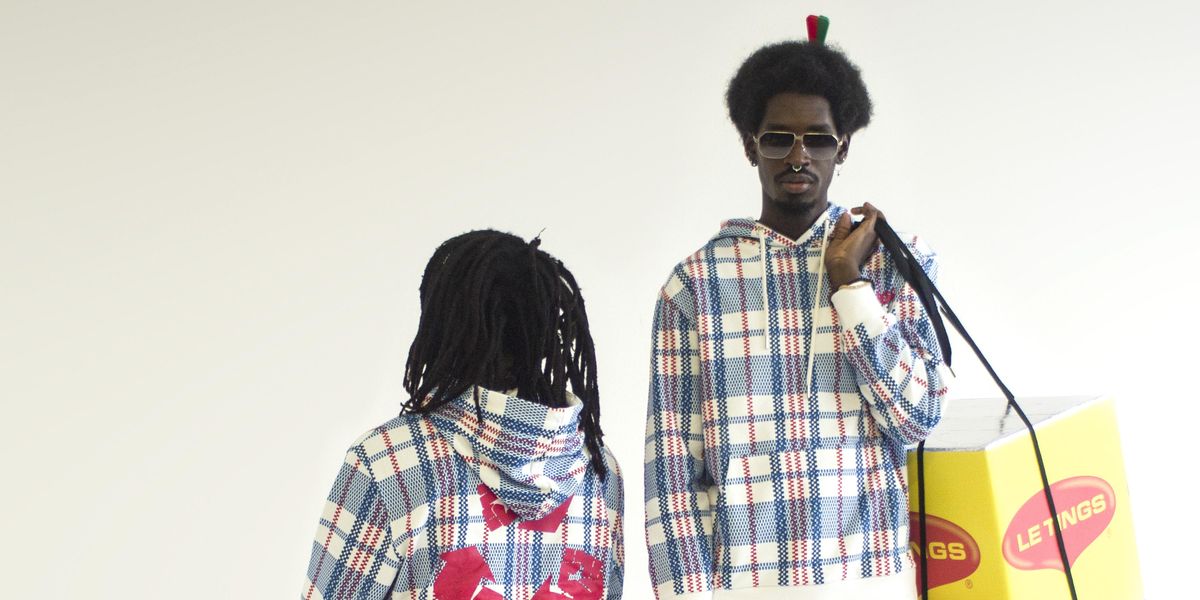 Harris Elliott has worked for nearly two decades telling visual stories through his many exhibitions and curated installations. The London-based creative director and academic has worked extensively with Japanese fashion brands and is known for his deep dives into subcultures, among them the Return of the Rudeboy exhibit, which was published into a book. He's created campaigns for the likes of Adidas, Puma and Thom Browne and has also worked with artists like Gorillaz, Kasabian and Erykah Badu.

For his latest project, Elliott was tapped by Nordstrom as one of five Black creatives to curate their own shop for the retailer. "This partnership signifies creative authenticity paired with Black cultural relevance, and I'm proud to be working with Nordstrom to bring new Black design references and stories to new audiences," he said of the shop, which launched in February during Black History Month.

Among the brands Elliott featured are Art Comes First, Nicholas Daley, Wanda Lephoto and Le Ting (the Exhibit69 jackets he curated have been particularly successful). He also created a video to coincide with the concept shop that mixes a retro reggae mood with the aforementioned labels and product. PAPER caught up with Elliott to discuss his creative process behind his Nordstrom curation, the significance of working with Black brands and his visual storytelling process.

Where did you get your inspiration from for your Nordstrom curation?

The Nordstrom platform allowed me to provide opportunities for a few younger brands that would otherwise find it very difficult to be exposed in this way. My inspirations were from the outsiders within culture like Basquiat, Yasiin Bey, James Baldwin, Saul Williams, those whose craft and modus operandi does not follow the crowd, yet when their talents are exposed to wider audiences they can engage with the same elevation that mainstream brands/artists do.

Can you walk us through your creative process?

One of my favorite films Rockers, which is 110% Jamaican attitude inspired me to present a visual offering that stands out from the crowd. I picked Wanda Lephoto from Johannesburg, South Africa because it was important to have global Black voices in my offering. Art Comes First are not new to worldwide exposure, though they have a very unique offering that is very covetable and their execution is always impeccable. The Exhibit 69 artistry and one-of-a-kind paintings on jackets are too sick and Le Tings has totally unique products and an original way of developing product and that is really exciting to unleashing that to a wider audience.

What do you think was the most important or challenging part of making Concept 012: Black_Space?

The press surge in the aftermath of the murder of George Floyd and the reemergence of the BLM movement put every aspect of racial politics and inequalities on everyone's desks and screens in every industry. Nordstrom chose to hand over all creative license to five outsiders from their establishment, rendering control to those that may not share their brand cultural DNA, I imagine that was the most unnerving and challenging aspect, the brand not having jurisdiction over the narratives being created. This has to be one of the ways forward within fashion and media, the curriculum can't be decolonized if the colonizers are still controlling every narrative through their biased lens.

For myself and the other curators, this is what we do all the time, creating beautiful stories and assets, this project will hopefully give other brands the confidence to share their platforms so that untold stories, views and cultures can share the spotlight.

I have been trying to tell brands for about 7 years about the rise of roller skating, I often saw many kids near my home tearing up the roads on their skates, brands are slow, so I had to tell the story myself. To fuse roller skating with reggae and sound system culture was a story I had never seen before, it felt fresh to make the film Rockers Revenge and give every brand their own bit of spotlight.

With our label @Letings_ we introduced the laundry print hoodie which has it's roots in 80's West African socio politics, and also a hoodie inspired by the hot drink Milo which is a staple in Afro Caribbean and Asian homes across the globe, it was really important to introduce these tropes on this platform as they have a wider appeal than their origins. We have totes which are recreated from rice sacks sourced in West Africa, we are remixing our own symbols and representing them.

You have been working for nearly two decades now, bringing cultural values and storytelling to visuals. Has the social and cultural movement last year impacted your direction or your goals?

There are much bigger stories that I need to tell that can communicate on multiple levels. 2020's wider cultural exposure to endemic institutionalized racism has further endorsed my general practice ethos, I will forge ahead and go deeper with my referencing and projects. There is a broader appetite for stories with cultural integrity that are also visually engaging and commercially viable.

I am working on a large Black Beauty immersive exhibition which has a few unique offerings on what that term means. I am creative director for musician Kae Tempest, we have just started developing the 4th album campaign. We are also working on an original store installation for our brand letings.co in London , we are currently planning the visual identity and a cultural program to support the launch, that will hopefully be opening by summer this year.

Concept 012: Black_Space is open now until early May in select Nordstrom stores and Nordstorm.com.